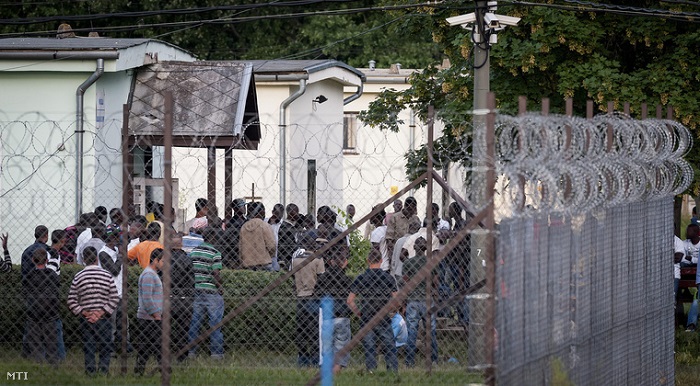 A package of amendments that would crack down on Hungary’s asylum-seekers was submitted by the government to Parliament this week, and is expected to be adopted during the National Assembly’s spring session. The Hungarian Helsinki Committee, a human rights organization specializing in asylum law, says the proposed amendments violate EU asylum law, international human rights standards, and European values.

According to Helsinki, if adopted in its current form the bill would require the police to force all migrants and refugees to outside of Hungary’s border fence, into the “no-man’s-land” at the southern border — depriving them of proper access to an asylum procedure within the country. Once behind the fence, migrants would be able to queue to re-enter the country on an asylum claim. Currently around 10 people per day are admitted on those grounds. If accepted, asylum-seekers would enter so-called transit zones at the border where their asylum applications could be lodged and processed. Asylum applicants would then be held in detention at the transit zones, reportedly housed in storage containers, for the duration of their procedures.

The Helsinki Committee says the proposed legal changes warrant an immediate and definite response by the European Commission and other EU institutions, and that they could affect how the EU utilizes Dublin regulations, rules that require asylum applications to be handled by the first EU country entered by an asylum seeker. A likely result of the measures will be the general suspension of Dublin transfers of asylum-seekers to Hungary from other EU Member States due to the systemic deficiencies the changes will cause in Hungarian asylum procedures, Hungarian Helsinki Committee co-chair Márta Pardavi says.

“In the event that these amendments are passed, EU and human rights law will be so disregarded in Hungary that other EU Member States will have no choice but to determine that there are no sufficient safeguards to protect the rights of asylum-seekers,” says Pardavi. “Courts in other EU Member States will have to find that these flagrant breaches of EU and human rights law are systemic, rather than occurring only in specific cases.”

The Hungarian amendments appear to position Hungary to receive the same treatment as Greece regarding asylum-seekers being sent back under Dublin regulations; Greece – as the result of a 2011 European Court of Human Rights decision – was excluded from receiving returned asylum-seekers because it was unable to provide adequate conditions or protections for them.

Being potentially barred from receiving asylum-seekers under Dublin regulations might not be only an unintended consequence of the new rules, Pardavi suggests.

“This is a cynical and devious way of ensuring that Member States do not send asylum-seekers back to Hungary,” she says.

You don’t have to go home, but you can’t stay here

Escorting all third-country nationals (non-EU citizens) en masse beyond the border would cause further strain on countries such as Serbia who are already struggling to cope with the influx of migrants and refugees, Pardavi says.

“Basically, police will tell them to leave. But due to the vagueness of the bill, it is completely unclear whether Hungarian authorities will completely set aside the current rules governing how expulsion procedures work.”

According to Pardavi, the bill does not explain how it relates to the EU Returns Directive, which establishes common standards and procedures for EU countries in deportation procedures, nor does it explain whether the amendments would replace, complement or work in parallel with existing EU laws. The vagueness of the bill also makes it unclear how immigration authorities will decide to which border section, the Croatian or the Serbian, the foreigners will be pushed back.

Another tool in the toolbox

The Hungarian government has prolonged the national “mass migration crisis” – a special legal tool allowing exceptional rules to be applied in migration issues – until September 7, 2017. According to those special rules, transit zones can be located anywhere in the country, not only at the border. However, the new bill is unclear about where the zones may be located and how they will be used.

“Minister Overseeing the Office of the Prime Minister János Lázár has said there will be a phased transfer of everybody [residing at open reception facilities or detained in asylum or immigration detention facilities] to these transit zones,” Pardavi says. “Where these transit zones will be is unclear. There has been mention of having more transit zones, for the purposes of detaining up to 200-300 people each. We don’t know what will happen with the current camps.”

According to the bill, all asylum-seekers, including vulnerable people, families, and unaccompanied children over 14 years of age, will be detained in the transit zones for the entirety of their asylum procedure. Current rules limiting time in the transit zones to 28 days would be eliminated, potentially greatly prolonging the time spent in detention. Under the new rules, decisions on asylum applications could be made by judicial clerks and not only trained and appointed judges. The deadline to seek judicial review of inadmissibility decisions or rejections of asylum applications would be drastically shortened to three days. Pardavi says this modification would hinder the applicant’s ability to effectively challenge these decisions in court. Applicants would only be allowed to leave the zone and enter Hungary if the authorities grant them a protection status. Otherwise, they will be confined to the transit zone with only one way out – going back to Serbia.