Hungarian fencer Áron Szilágyi, who carried the Hungarian flag in the opening ceremony of the Rio games, defeated American Daryl Homer in the men’s saber event to win his second Olympic gold medal.

“I am blessed to be able to experience being an Olympic champion for a second time,” said an ecstatic Szilágyi, who took gold in the same event at the 2012 games in London. “The first time was a fantastic experience.  Now they (will be) hanging the Olympic gold medal around my neck for a second time. I won’t believe it until it happens.”

This is the first time the flag bearer for the Hungarian Olympic team has won a gold medal since Imre Németh in the hammer throwing event in 1948.

In its third match, the Hungarian men’s water polo team tied Greece with a final score of 8-8 to the disappointment of team captain Tibor Benedek.

After day 5 of the 2016 Olympic Games, Hungary’s ranks 5th in the medal standing just after Australia but ahead of Russia, having won five gold, one silver and one bronze medal. 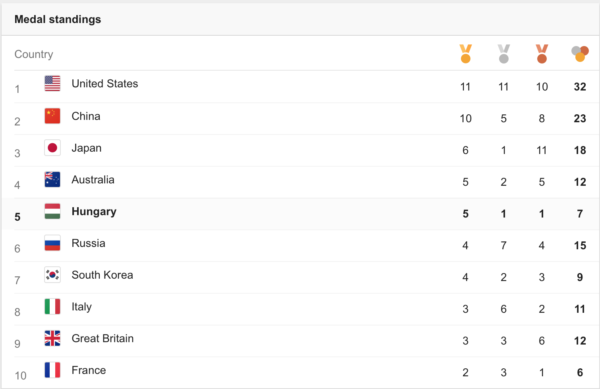