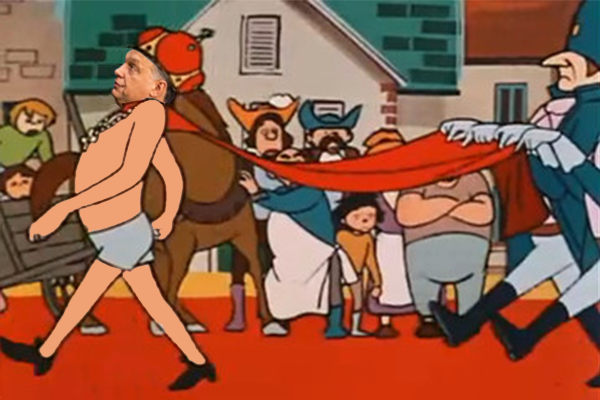 Hungary’s political opposition may be incapable of mounting a serious political challenge to Prime Minister Viktor Orbán and his Fidesz party, but at least its leaders agree that the head of government has lost all sense of reality, that is if his annual state of the union speech delivered to party faithful on Sunday is anything to go by.

MSZP chairman and parliamentary fraction head Jözsef Tóbiás criticized the Prime Minister’s speech for failing to deal with the real problems of society.

“Viktor Orbán is lost,” said Tóbiás, who believes him incapable of providing solutions to the country’s problems.

“While the Prime Minister speaks of 21st-century healthcare, the truth is that healthcare is in ruins, education has collapsed and public administration is in disarray,” said Tóbiás, citing as an example the fact that tens of thousands of doctors and nurses have already left the country.

Democratic Coalition (DK): “Orbán and his skinheads pose the greatest threat to Hungary”

The left-of-center political formation founded by former Socialist prime minister Ferenc Gyurcsány reacted to Orbán’s speech by claiming that he “and his skinhead group” present the greatest threat to the country.

DK independent MP Lajos Oláh called the speech “tragic” in its praise of the Horthy system, calling it devoid of European Union values.  The DK spokesman told journalists that the prime minister “dreams of a world where only Fidesz gentry and casino moguls feel at home and where there is no place for teachers in plaid shirt or doctors and nurses fleeing abroad”. Oláh said the prime minister should have explained why more patients are dying from hospital infections than car accidents, why the teachers are demonstrating and why Orbán wants to use a referendum to take Hungary out of the European Union.

Politics Can Be Different (LMP): “Orbán has lost all contact with reality”

Politics Can Be Different responded to Sunday’s speech by saying it was testimony to the fact that Viktor Orbán has lost all contact with reality.

LMP spokesman József Gál told journalists that the head of government praised the very multinational companies he had been continually attacking.   He warned that the government planned to serve the interests of multinationals and safeguard Hungary’s competitiveness by keeping wages low.

With regard to Orbán’s claim that his government had saved education and public healthcare, the LMP spokesman said that “in reality these were saved by those who do their work every day for undignified wages”.

Dialogue for Hungary (PM): “Orbán suffers from a personality disorder”

Dialogue for Hungary (PM), which split off from Politics Can be Different in 2013, said the prime minister had no valid ideas about Hungarian reality, saying he “conjures up phantoms with which to battle”.

PM spokesman Bence Tordai said Orbán “suffers from a personality disorder” and is divorced from reality, even as he imagines himself to be a historically significant person who is defining Europe’s future.

Bence said Dialogue for Hungary does not consider credible those “who use skinhead criminals to obstruct a referendum one day only to talk the following day about what a wonderful thing referendums are”.

The politician said Orbán can only speak about “the Fidesz reality”, and that for information about the real Hungarian reality it was necessary to listen to the “checkered-shirted teachers” and those nurses who are demonstrating over monthly wages of HUF 74,000 (USD 270), or those public work scheme employees earning HU 52,000 (USD 190) a month “sentenced to death by starvation”.

The Hungarian Liberal Party, represented in parliament by independent MP Gábor Fodor, said that “in Orbán’s illiberal state every Hungarian is forced to experience first-hand what the communist system was like”.

In a statement given to state news agency MTI on Sunday, the opposition party wrote:

“The mindless wave of nationalization, the eastern opening policy, the persecution of multinational companies, the restrictions on the rights of freedom, the destruction of the system of checks and balances, and the state media which functions as a mouthpiece for state propaganda, the appearance of muscle-bound skinheads at the election office, the continuous warlike rhetoric—all of this is reminiscent of the Rákosi era”.

The Hungarian Liberal Party believed that Fidesz had created a world of crony capitalism and political patronage which “elevates theft to the level of the state assisted by legislation”, and in which everyone is an enemy “who dares to criticize the state party and its leaders”.

The party hoped that “despite the permanent government propaganda”, more and more will come to see that “six years of Orbán’s illiberal state has taken Hungary back to the 1950s”, and another six years would have unforeseeable consequences.

Jobbik: “Orbán has no concept of reality”

Jobbik, Hungary’s second-largest political party after Fidesz, reacted to Orbán’s speech by stating that the head of government has no idea about reality and he would do well “not to live in the virtual Hungary portrayed by his advisors”.

Jobbik spokesman Ádám Mirkóczki said there already exists in Hungarian villages and city neighborhoods a parallel society inconceivable to Orbán.  “The truth is that in certain schools there is no money for heating or even for chalk, and that the state of the healthcare institutions is tragic, their equipment is antiquated, and that the national debt increased.

“Anyone who thinks education, healthcare and public security is a success story” has no concept of reality.