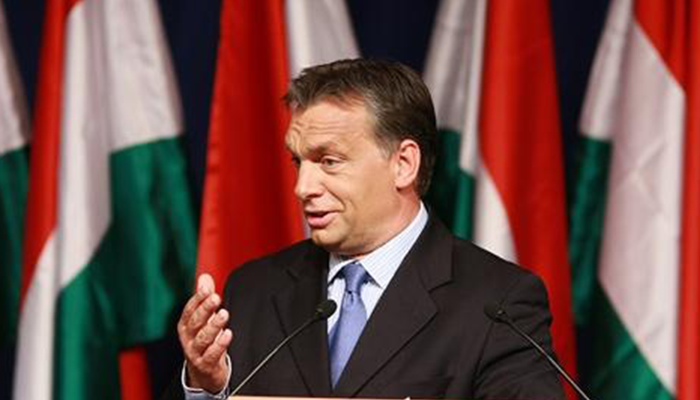 On Sunday Prime Minister Viktor Orban delivered his annual state of the union address to a packed house at the Millenaris Theatre.  Apart from invited guests (which included members of the government, prominent Fidesz politicians, and a number of Fidesz activists), only television crews and photographers were admitted, writes origo.hu. Journalists and those without written invitations were given the option of watching the prime minister’s speech at home or on a large screen erected outside the theatre for this purpose.

Orban used the occasion of the speech to present the latest Fidesz narrative about the events of the past twenty-five years.  In a speech heavy in ideology, folk sayings, and anecdotes, but light on substance, Orban told the audience that the country must choose between the second system change or the restoration of post-communism.  He claimed that 2010 was the second system change to take place in 20 years.

We replaced the economic system that remained after the collapse of communism which we had tried to repair between 1998 and 2002 without success.  Then the communists, the socialists, and the liberals in the side-car returned and destroyed the country. … We were brought to this place by ambitious plans. The big post-communist stomach swallowed us, chewed us up, and consumed us.  Hundreds of thousands were without work.  Work had no honor, was not properly paid, pensions shrank, and hundreds of thousands were stuck in the hard currency trap.

Orban told the audience that an unsuitable state was born in 1990.  “The destruction of the communist state took place but the reorganization of the Hungarian state failed to take place.”

In place of the recognition of accomplishment, jealousy, suspicion, and confrontation crept in, strengthened, like the weeds in a garden, and strangled all from which success and hope might spring in the future.  In the name of checks and balances the labancok (troops loyal to Austria in the 18th and 19th centuries) created the country’s politics.

Orban said that by 2010 it was apparent that the post-communist system could no longer demonstrate its moral or economic superiority.  “In 2010 we were fed up and decided in favor of a new system change. We set as our goal a strong Hungary.”

Thanks to (former parliamentary speaker and head of state) Pal Schmitt we adopted a new constitution with which the state concluded a new contract with the settlements in which it took over the schools and hospitals, in exchange for which it requested rational economic behavior.  A new contract was signed with the people also in which we introduced fair burden sharing, family taxation, and public work.

He thanked the Peace March (a pro-government NGO reportedly financed by Gabor Széles and other Fidesz oligarchs) for “moving millions in the defense of the lower household utility costs, and for causing millions to march whenever the country is threatened with sinking to the level of a colony.”

The head of government told the audience that they should clarify whether Fidesz-KDNP was right to use the two-thirds majority not to “patch the previous system”.

In an apparent nod to his Christian democratic allies, Orban weaved some biblical imagery in his speech (even though it may have gone over most of the audiences’ head).

We did not regard the two-thirds (majority) as a deserved success but as an authorization.  We needed neither the bowl of lentils, nor the 30 pieces of silver, not the communal bulrushes (közös gyékény).

(Editor: the first Beacon reader to explain the significance of the communal bulrushes gets a free copy of the King James Bible).

He said Hungary stood on the threshold of a new era over which it needed to step and that Hungary had had enough of the politics of meeting others expectations.

In the East they say one’s foot knows if the shoe is tight.  To this Brussels incorrect answer is for us to cut off our toes. Hungary will not give in any more.  Today everyone can see that those are in the majority who say that it is necessary to struggle.  Those who do not demand assistance but work.  Not only to survive, but to get from one to two.  Those who stand in their corner and pick up the gloves.  If anything can be called an authentic revolution, system change, this can.

Orban then went on to list what he evidently feels are his government’s main accomplishments.

Who would have believed some years ago that Hungary could break inflation, decrease the budget deficit, tax banks and multinationals, grow wages and employment, capable of achieving stable economic growth, send the IMF packing, and that the country would stand on its own legs?  Who would have thought that the much criticized Hungarian solutions would be adopted by others?

Orban believes his government and its supporters have “won many battles”, but have yet to “win the war” despite its many accomplishments.  He told the audience that “it is necessary to struggle so as to prevent others from taking away the decrease in household utility bills, the extra maternity support, and the security of old age”.

Our goal is to have the cheapest energy in Europe, for everyone to be able to work who wants to, for everyone to be able to go to a good school, and for every young person to have as many children as they want. … We must not allow those opposed to our interests to cause us to be indecisive.  There is nothing more invigorating than when they are shooting at people but miss them said the good old Winston.

He then asked rhetorically whether Hungary was to be the country of victors, or whether the opportunities would once again return.

Will we be a strong country or a weak one that always pulls the short stick?  We can now enter the place we have been working for for four years.  Let us show that we walk our own path.  If we do not control our own lives, then somebody else will.  What needs to be done 50 days before the elections?  Blow your horns and saddle up, because tomorrow we start.

Later that day MSZP chairman and united opposition candidate for prime minister Attila Mesterhazy issued a statement in which he called Orban’s speech “a lying and cowardly speech from which only reality and people’s actual problems was missing.”

The head of government either has no idea about the country he is running, or does not dare to confront the reality as he has heard that over the past four years the quality of life has decreased for eight out of ten Hungarians.  The middle classes are continually weakening, poverty is not only growing but deepening.  Four million Hungarians live in poverty, one and a half million live in deep poverty. 500,000 children are starving on a daily basis.

Mesterhazy writes that one does not have to be an economist to sense that the Hungarian economy is not performing better.  “People are living worse from one day to the next.”

It is not by chance that the prime minister quoted Teng Hsiao-ping and others instead of speaking about the daily problems of Hungarian families. Not only has he not solved these problems, but his government has made them tragically worse.

On Monday Dialogue for Hungary co-chair Timea Szabo posted a blog in which she observed that the prime minister had said nothing of substance in his state of the union address.

Interestingly, his speech did not mention the 30 new taxes introduced, the 27 per cent VAT, or the state debt, the 310 forint to the euro exchange rate, and the playing of Hungary into the hands of Russia.