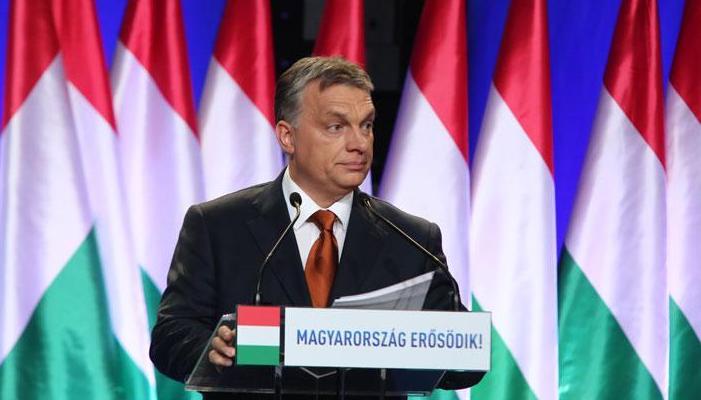 LMP co-chair András Schiffer rejected Orbán’s claim that nearly half a million workplaces had been created since 2010. According to Schiffer, only 40,000 “real workplaces” have been created, which he attributes primarily to “money distributed during the election year from development funds.”

“Middle-class (polgári) governance rules out formulating policies on the basis of business interests,” said Schiffer, who accused the Orbán cabinet of “enriching a few families” at the expense of those who work hard.  Schiffer observed that Hungary now has the largest income disparity of all the EU member states.

On the subject of competitiveness, the LMP politician said that only education and research and development could make the country competitive and pointed out that these were areas where the government has drastically cut funding.

Schiffer called for a return to a progressive system of taxation, an employment law “that actually protects workers”, and wage increases “primarily in the public sphere”.  He called on the government to support his party’s proposals with regard to auditing politicians’ personal assets.

Együtt (Together) — the party of era change

Speaking on behalf of his party, Viktor Szigetvári objected to the fact that the head of government had failed to address corruption, poverty or what he called the “sense of hopelessness which reigns in the country”.

He said that the man delivering the speech was “the tired, broken prime minister of a weakened Hungary who is incapable of taking corrective action”, and that it was the duty of Szigetvári’s party to “struggle against corruption and to expose how the justice authorities assist Viktor Orbán and those corrupt near him steal.”

DK spokesperson Zsolt Gréczy  said the Prime Minister had said nothing of substance Friday afternoon, and it was clear from his speech that Orbán’s  “mental and political decision-making capability” was diminished.  According to the DK politician, Orbán had attempted to support the successes of his government either with “inaccurate data” or data which will “not stand the test of time.”

Gréczy claimed that many of the projects driving Hungary’s growth were brought to Hungary by the Socialist government of now-DK chairman Ferenc Gyurcsany (2004-2009).  DK believes that a middle-class Hungary should not be represented by a person who appeals to xenophobia, harms the banks, hurts the cause of freedom and damages democratic institutions or the principles of market economics.

In a statement given to state news agency MTI on Friday, MLP chairman Gábor Fodor declared “it is not possible to build Hungary on hatred” and that “intimidation cannot be the basis for economic growth”.  He said “Hungary doesn’t need a new enemy but a vision of the future.”

“In place of flowery language and incitement to hatred, the citizens of Hungary expect answers. Only a weak prime minister accounts for his own failures by pointing the finger at immigration, Europe and liberals.”

On the subject of job creation, Fodor said every expert agrees that the public work program is a “chaotic failure” that does “not lead anyone back to the primary work market”.

“We are happy that Viktor Orbán at least mentioned ‘poverty.’  This means he did not receive the list from the Ministry of Human Resources banning the use of the word.  It’s a pity he did not add that the proportion of people in Hungary suffering serious deprivation is three times that of the EU average, and that more than 40 percent of the children are poor according to Eurostat data,” said Fodor.

He called an “open provocation” the Prime Minister’s claim that Hungary’s recent economic growth was not dependent on foreign debt.  Fodor said the economy is not longer growing from loans obtained abroad, meanwhile the government classified for 30 years the expansion of Paks nuclear power plant, which “will put our country in debt for generations.”

He pointed out that Orbán neglected to address the US entry ban scandal, or “how Ildiko Vida is allowed to continue leading the national tax authority.

“Nor did he speak clearly on the question of whether he chooses Putin or the EU.”

MSZP deputy chairman Roland Márton observed that “Fidesz is in crisis, having lost one million voters”.

“His own representatives criticize him, his advisors expose him, and his journalists and television stations have abandoned him,” he told reporters.

Márton pointed out that Orbán neglected to mention the Buda-Cash scandal which has harmed 120,000 depositors, “choosing instead to speak in defense of the Central Bank governor György Matolcsy”.

He criticized Orbán for raising the example of the dentist who ran from Athens to Sparta, but neglecting to mention “the hundreds of thousands who had no choice other than to run from Budapest to London.”

He called “a sign of weakness” the fact that “after five years of governing with a two-thirds parliamentary majority” the prime minister was still “pointing the fingers” .

Vona said Hungary needed “cool-headed, substantive and constructive debate” and not “political cold war”. He accused the Prime Minister of “raw and violent campaigning”, noting that “we have found empty success propaganda in the government media on more than one occasion.”

He said Orbán had failed to address “real questions” such as education, health care, emigration and the transatlantic free-trade agreement.  On the subject of corruption, Vona said that for many years Fidesz had “competed with MSZP to see who is more corrupt”.

With respect to Orbán’s claim that he would henceforth champion the cause of “hard-working people”, Vona likened him to “a pickpocket who, several hours later, invites his former victims for a lemonade”, and that a “middle class cannot be built on the basis of political loyalty or interests, but rather from below based on merit.”