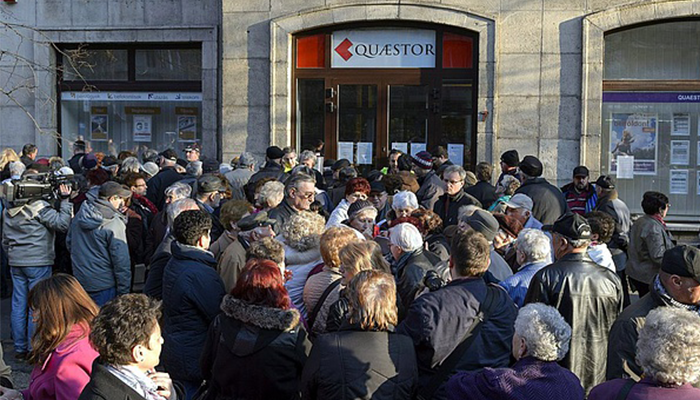 [Note: An earlier version of this article incorrectly reported that the cost of the new fund is to be financed by Hungarian tax payers.  In fact, it is to be funded by the same financial institutions belonging to the “risk society” that presently pays annual fees to the National Investors Insurance Fund (BEVA)]

By a vote of 185 to 5 the Hungarian parliament passed a law on Tuesday creating a fund to compensate some 32,000 Quaestor bond holders. The reason given for the law is that “legal proceedings against the company are unlikely to result in Quaestor customers recouping their investments”.  Customers who bought bonds from Quaestor Financial Hrurira may apply for compensation between May 6th and June 5th.

The law was opposed by five independent MPs on the grounds that it was neither fair nor constitutional to single out Quaestor customers for special treatment or to require parties having nothing to do with that financial brokerage company’s collapse to compensate its victims.

The law provides for the fund to compensate bond owners up to HUF 30 million (USD 110,000) for any amount not covered by the National Investors Insurance Fund (BEVA).  It follows last week’s announcement by the National Bank of Hungary that BEVA would compensate all Quaestor bond holders up to HUF 6 million (USD 22,000) each, regardless of whether they purchased “actual” or “fictive” bonds.   The cost to BEVA of compensating bond holders up to HUF 6 million each will be HUF 60 billion to HUF 80 billion (USD 222 – 296 million) according to the central bank.

Any amount exceeding HUF 6 million per investor is to be covered by the fund, which is expected to pay out HUF 130-150 billion (USD 482-USD 555 million) over the next two months.

This means that Quaestor customers, who bought bounds yielding 6.5 percent annually (verses the 2 percent offered by treasury notes) mindful of the risks and with the full knowledge that their investments were NOT insured, are to be compensated on the same level as depositors.

Some 36,000 Quaestor customers either purchased or kept securities on account at Quaestor.  Of these, some 32,000 bought bonds in Quaestor Securities Trade and Investment Zrt. or other companies belonging to the Quaestor group of companies.

According to the National Bank of Hungary, Quaestor reportedly sold HUF 210 billion worth of bonds, HUF 150 billion of which were “fictive”, that is, not approved by relevant financial oversight authorities.  Former finance minister Lajos Bokros argues, however, that this is not the case, and that the oversight authorities must have approved each and every bond issued by Quaestor in order for them to appear in electronic form in the central registry.

The cost of compensating Quaestor’s victims beyond the amount raised from the liquidation of Quaestor’s assets is to be paid for by financial institutions dealing in securities.  This includes all the major commercial banks, including state-owned Hungarian Trade Bank (MKB) and Budapest Bank, which means Hungarian taxpayers will end up footing at least part of the bill.

National Bank of Hungary will lend BEVA the funds it needs to compensate Quaestor victims.  However, ultimately this amount is to be repaid from obligatory risk insurance contributions collected from Hungarian financial institutions.

Furthermore, to the extent the liquidation of Quaestor’s assets fails to raise sufficient funds to compensate all bond holders up to HUF 30 million each, the cost of compensating Quaestor’s victims is to be borne by the same financial institutions that contribute to BEVA, in the form of a compulsory “advance”.

Former Banking Association president Péter Felcsuti says this is a clear violation of the agreement concluded two months ago in which the government agreed not to impose additional taxes or financial burdens on the banking sector.

The Alliance for Protecting the Interests of Individual Investors (Tebész) believes that the law is unconstitutional in that it gives special treatment to the customers of a particular brokerage house.  Tebész speculates that, in light of Tuesday’s decision, Buda-Cash victims will also demand to be compensated up to HUF 30 million given the apparent failure of state financial oversight authorities to properly monitor that brokerage firm.

Various economists have criticized the law as “unethical” for imposing the horrendous cost of compensating Quaestor’s 32,000 bond holders on parties having nothing to do with, by all accounts, was the largest pyramid scheme in the history of Hungary.