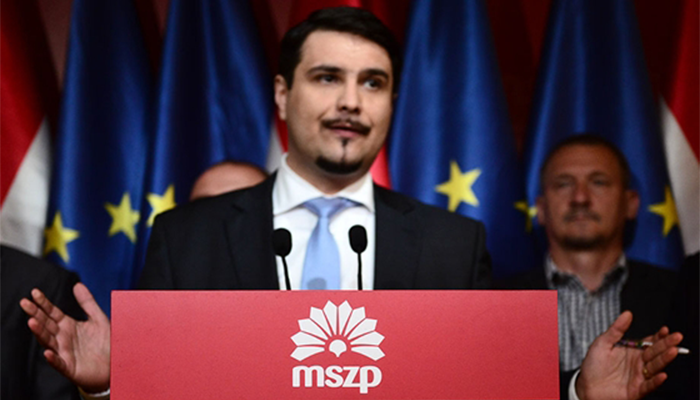 Polling at just over 14% among certain voters only days before the 2014 European Parliament election, the Hungarian Socialist Party (MSZP) received just under 11% of the vote on Sunday, meaning Dr. Tibor Szanyi and Dr. Istvan Ujhelyi will be their only two delegates to go to Brussels.  As one left-wing commentator put it, “MSZP is no longer synonymous with the Hungarian left-wing”.

They will be joined there by two delegates from former prime minister Ferenc Gyurcsany’s Democratic Coalition (DK), which received 9.76% of the vote, and one candidate each from former prime minister Gordon Bajnai’s Together 2014-PM political alliance (7.22%) and Politics Can Be Different (LMP), which just managed to clear the 5% threshold with 5.01% of the vote. As predicted, the governing Fidesz-KDNP won the election outright, receiving 51.49% for 12 EP mandates.  Jobbik came in a distant second with 14.68% –  enough to send three delegates to Brussels, including Bela Kovacs who has been accused of being a Russian spy.

Two small parties participating in Friday’s television debate, Haza Nem Elado (Homeland Not for Sale) and Seres Maria Szovetsegesei (Allies of Maria Seres) together received less than 1% of votes. In Budapest, home to one in six Hungarians living in Hungary, Fidesz and Jobbik won 43.75% and 9.94% of the vote, respectively.

Of the left-wing/liberal opposition parties both DK (13.10%) and Together-PM (13.07%) managed to get more votes than MSZP (11.50%).  LMP received 7.93%, an entirely respectable result considering half their parliamentary delegates and all their Budapest city council members bolted to form PM 15 months ago in the hope of forming a political alliance with other parties capable of defeating Fidesz in the 2014 general election. (It was not to be and the united opposition suffered an epic defeat after waiting until the last minute to announce a joint list of candidates).

The EP election result is an enormous setback for MSZP and its beleaguered party chairman, Attila Mesterhazy, who announced Sunday night his party’s election committee members would offer their resignation at a party congress scheduled for Saturday. MSZP’s poor showing in the EP election makes it all but certain that the united opposition candidate for Budapest mayor in municipal elections scheduled for October will not be MSZP city assemblyman Csaba Horvath, but rather a candidate from DK or Together-PM.

It was not clear from Together-PM chairman Gordon Bajnai’s post-election speech whether his party still intended to support a joint left-wing candidate for Budapest mayor in October.  Bajnai said the EP election had given the upstart political alliance an opportunity to show its character to voters and that in a number of electoral districts Together-PM had come in second.  Bajnai announced before the election that if elected to the European Parliament he will step down in favor of PM co-chair Benedek Javor.

A visibly pleased DK chairman Ferenc Gyurcsany told supporters that the EP election result vindicted the decision taken two and one half years ago to form a new party that was “not willing to compromise” in matters of importance to Hungary and Europe.

Just as relieved (if not more so) was liberal/green party LMP which, up until fifteen minutes before the preliminary election results were announced, looked as though it would just miss the 5% threshold necessary to qualify for an EP mandate. LMP candidate for MEP Tamas Meszerics, whose competent performance in Friday’s debate appears to have won over undecided voters, promised that future elections would be “less exciting”.  Party co-chair Andras Schiffer credited party activists with getting out the voters, announcing that LMP had only spent HUF 4 million (USD 18,000) on the EP election. This is no small accomplishment considering the party achieved a similar result in the general election after spending some HUF 730 million.