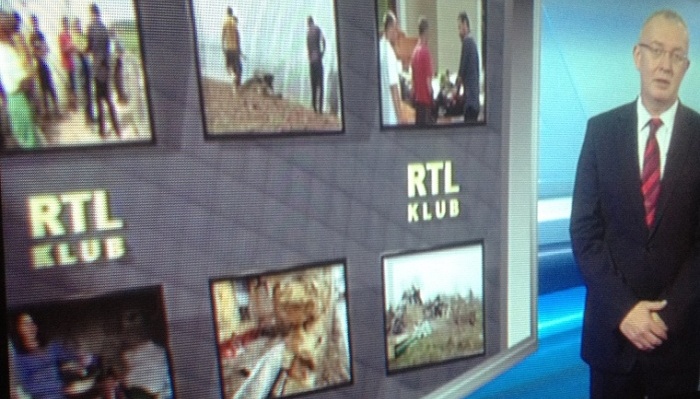 Hungarian state television’s popular political magazine A Lényeg (The Bottom Line) was largely devoted on Sunday to promulgating a world conspiracy theory, to wit: that Western journalists are manipulated by Western politicians controlled by prominent banking families, and that recent criticism of Hungary by the foreign press is the result of “the Hungarian government’s firm stand against capitalism and bankers”.

The program featured a known pro-Russian activist, a radical conspiracy theorist, a former Fidesz minister presented as an “independent expert” and a long-time Fidesz-loyalist political analyst.  The presenter opened the program with the following rhetorical question:

“Big games over the head of a small country. Can it happen that politics exercise influence on journalists?”

The program presented a “global analysis” according to which Hungary played a central “fundamental role” on the international stage, thereby drawing international criticism because of “the Hungarian government’s firm stand against global capitalism and bankers.”

Speaking from his own experience, Ulfkotte claims that all Western journalists are secretly working for secret services as simple propagandists. He told MTV on Sunday that “what German media claims about Hungary is simply not true” and that his friends “clearly see that the Orbán government in fact is making progress” economically.

Political analyst Zoltán Kiszelly added that “to the west of the Elbe river people are raised to believe everything they read in the newspapers. This is why there you have to manipulate journalists before everyone else.”

The report also featured János Drábik, the author of a series of books promulgating conspiracy theories in connection with the Illuminati and other supposed secretive, sinister forces overseeing all political happenings.  Drábik claimed “there are approximately three hundred extremely rich banker dynasties” that “own the entirety of the banking and financial system”, which, in his opinion, means “they control the [Western] political elite as well.”

This was Drábik’s first appearance on state television, as previously his delusional ravings were confined to privately owned, pro-government media outlets like Echo TV.

The televised report concluded with the notion that Western public discussion is, in fact, a “dictatorship of opinions” that aims to suffocate the Orbán government’s right to free speech, because “the government’s measures mean an enormous loss in profits” for the multinational companies and banks that are operating in Hungary.

The program also featured a short interview with government international spokesman Zoltán Kovács who volunteered that “you do not need conspiracy theories to see that these processes exist.” Kovács said Hungary’s ties with Russia are “overly exaggerated” and Hungary and Russia are simply being “practical” in nature.

After the interview, the program continued with a detailed criticism of how commercial channel RTL Klub presented the extreme poverty that is existing in Hungary. According to official government statistics presented on MTV, this extreme poverty is “rapidly decreasing” and is “numerically much smaller than the EU average”. The program concluded with Imre Boros, a former Fidesz minister presented as an “independent expert”, giving practical advice to journalists on how to speak about poverty in Hungary:

“RTL […] always emphasizes the helplessness of the situation. You can go on investigating those responsible but the problem is much more complicated, its reasons being rooted in decade-long phenomena. […] To exclusively portray poverty as getting worse without showing the way out is a textbook example of hypocritical behavior.”

You can watch the whole program in Hungarian here by clicking on “8. rész” (part 8).

Hungary’s public MTVA broadcasting company receives annual state subsidies in the order of HUF 78-80 billion (USD 320 million).  It is regulated by Hungary’s National Media Authority (NMHH) which, among other things, is supposed to oversee its impartiality in political coverage.  NMHH’s budget for 2014 was over HUF 32 billion (USD 130 million), or roughly USD 325,000 a day.