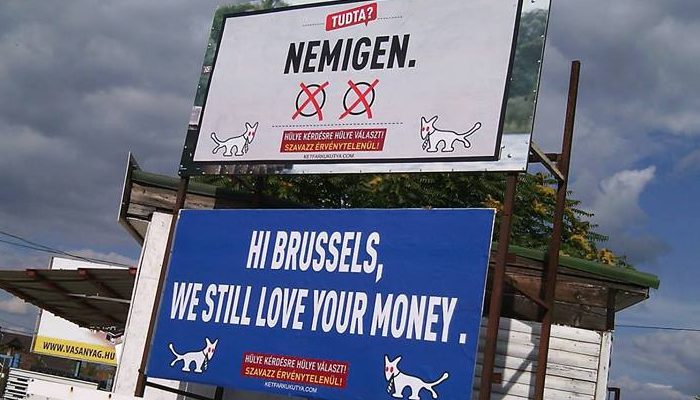 The party, which typically limits its political activity to ironic street art making fun of Hungarian political life, stepped into the campaign running up to the October 2 anti-EU refugee resettlement quota referendum. It initiated its own propaganda campaign encouraging voters to cast invalid ballots by marking both “yes” and “no.” The campaign, which cost roughly HUF 35 million (USD 127,000) raised largely through crowdfunding on the internet, included 500 outdoor billboards and over 100,000 smaller posters pasted around the country by the party’s followers. The campaign motto was, “A stupid answer to a stupid question. Vote invalidly!”

The referendum was indeed rendered invalid due to insufficient participation, with only some 40 percent of eligible voters casting valid ballots. 98 percent of voters voted “no” and a bit more than 1 percent voted yes. Of total participants, 6.3 percent spoiled their ballots and voted invalidly, a fact that Kovács says means Two-tailed Dog is no longer a joke party.

He said the label is unfortunate because the party calls attention to serious issues, albeit in a humorous form.

“I don’t think the national list presents an unsolvable problem for us,” Kovács said, referring to a part of Hungarian election law that requires a party to nominate a candidate in 27 individual voting districts, in at least nine counties and in Budapest. “But I think it would be pretentious of me to say that we have 100 sure candidates. At the same time I don’t want to fall into the same mistake that the other parties make of making big promises,” he told Népszabadság.

(My personal favorite was “Did you know? A tree could fall on your head.”-ed.)