Hungarian kayakers won gold medals on Thursday and Saturday, bringing to 15 the total number of medals Team Hungary has won as of the close of the Rio games on Saturday.

On Thursday Danuta Kozák finished first in the women’s single 500 m event, becoming the first Hungarian kayaker to win a total of four Olympic gold medals in kayaking and canoeing.

On Saturday the team of Gabrilla Szabó, Danuta Kozák, Tamara Csipes and Krisztina Fazekas-Zur took gold in the women’s K4 500 m event, bringing to five the total number of Olympic medals won by Szabó in her career.

“It’s interesting because I didn’t feel the battle at all,” she said. “I sensed that it was close but I was concentrating so much and paying attention to the girls that it was virtually not a competition.  I wanted to finish a perfect race.”

“The others told me welcome to the club.  Finally I, too, became an Olympic champion.  I worked an awful lot for it.  Since October I’ve performed a lot of hard work mentally and physically as well.  It makes me happy that it was not in vain.”

Sunday is the final day of the Olympic Games in Rio.  Hungary will be represented in the men’s marathon by Gáspár Csere and Gábor Józsa and in the men’s mountain bike event by András Parti.

As of the close of Saturday, Hungary’s medal ranking was twelfth, just ahead of host country Brazil. 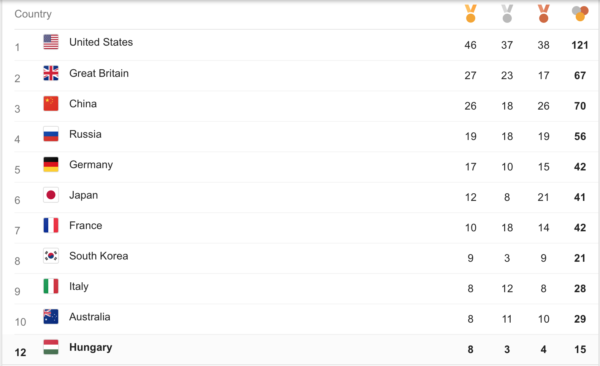