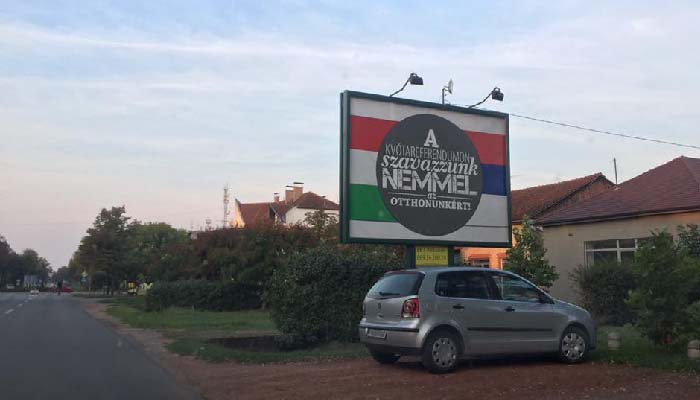 The Hungarian government is pulling out all the stops in its campaign to induce ethnic Hungarians living in the near abroad to vote “no” in the October 2nd referendum. (By an act of the Fidesz-controlled parliament in 2010, people of Hungarian heritage can obtain Hungarian passports and vote in Hungarian elections, including referendums-ed.).

Situated along the West Balkan route used by people fleeing war and terrorism in the Middle East and central Asia, Serbia experienced a large influx of refugees last summer.

Many ethnic Hungarians living in Serbia were unhappy with the Hungarian government’s decision last summer to build a 100-mile fence along the Serbian border. Within days of sealing the border, Hungarian authorities clashed with asylum seekers at the Röszke–Horgoš border crossing.

Finding their way blocked, tens of thousands of refugees attempted to reach Austria via neighboring Croatia and Slovenia.

Hungary’s refusal to admit more than 30 asylum seekers a day has resulted in a build-up of refugees along its southern border. For this reason, Hungarians living in the Serbian province of Vojvodina are more likely to come into contact with asylum seekers than those living in Hungary proper.

One year on, ethnic Hungarians living in Serbia are being told to vote “no” in Hungary’s referendum on whether the EU should mandate the settlement of non-EU citizens (i.e. refugees and asylum seekers) in EU countries without the consent of parliament.

Towards this end, the Alliance of Vojvodina Hungarians (VMSZ), an ethnic Hungarian political party in Serbia, organized a town hall meeting in Magyarkanizsa (Kanjiža) on Friday. The purpose of the event attended by around 40 people was to encourage those registered to vote in the upcoming referendum to vote “no”.

It is not hard to see why certain ethnic Hungarian politicians in Vojvodina have decided to jump on the Fidesz bandwagon. In 2015, the Fidesz government announced it would launch a USD 175 million “regional economic development program” in Vojvodina with the Alliance of Vojvodina Hungarians (VMSZ).

Claiming that “certain American organizations” are behind the refugee crisis, Mészáros delivered a long-winded lecture on the history and future of migration from the Sumerians to the present, making references to the “The Last of the Mohicans”.

When asked what the point of the October 2nd referendum was, given the ambiguity of the question and the lack of clear instructions for lawmakers in the event of a valid “No” vote, Bálint Pásztor, a 37-year-old ethnic Hungarian Serbian MP, took the podium.

According to Pásztor, who is serving his fifth term in parliament, there are two types of referendums: those that decide issues, and those that provide an opportunity for citizens to make their opinions known.

“This referendum, for example, is one that provides an opportunity [for citizens to make their] opinions known, and it is not one that will decide an issue,” Pásztor said.

As far as Hungary is concerned, Serbia is capable of providing refugees and asylum seekers with safe haven, which is why Hungary does not feel legally compelled to admit them. However, judging from its party’s platform, VMSZ sees things somewhat differently, at least with regard to the issue of Serbia taking back refugees whose applications for asylum have been rejected.

“The return of migrants [from Hungary] is completely unacceptable for VMSZ because Serbia lacks the finances and personnel to [take back the migrants],” read the party’s platform.

The point of the story

One middle-aged ethnic Hungarian woman who spoke to the Budapest Beacon said she attended the town hall event because she had yet to make up her mind how to vote.

“I came to hear the position of the speakers but I do not know yet how I will vote,” she said, recalling how the town square was filled up with refugees the previous summer.

“We never had any problems. I was never afraid,” she said. “I never felt threatened or molested by this people.”

While she admitted that many of the people she saw were young men, she also said that she saw women and children and that she pitied them.

When asked whether she thinks people in Vojvodina feel differently about refugees than their neighbors to the north, she responded:

No one else was willing to speak to the Beacon about their impressions of the meeting or how they planned to vote in the October 2nd referendum.