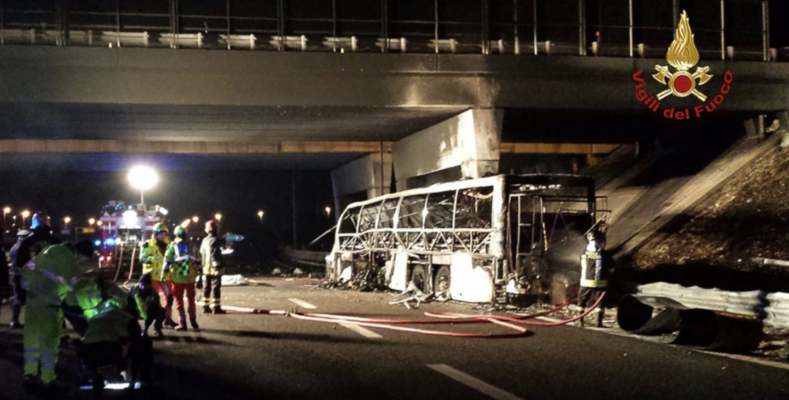 Hungary has declared Monday a national day of mourning after a bus carrying at least 54 passengers, including 36 high school students, crashed into a concrete pillar east of Verona, Italy, Friday night, killing at least 16 and injuring 26, ten of them seriously.  The bus was traveling in the eastbound lane of the A4 motorway in the vicinity of San Martino Buon Albergo when it reportedly veered off the road into the guard rail and crashed into a concrete pillar, ripping in two and catching on fire, reports Index.hu.

The bus was transporting students and teachers from Budapest’s Szinyei Merse Pál college preparatory high school (gimnázium) returning from a ski holiday in France. A number of students escaped through windows aided by teachers, fellow students, and Italian motorists.  The injured were transported to hospitals in Verona including a physical education teacher who incurred serious burns by repeatedly returning to the burning bus to rescue students.

The cause of the accident is not known at this time. An Italian truck driver reportedly told Italian police he noticed something the matter with the bus some 30 kilometers west of the scene of the accident. Driver error has not been ruled out as a number of survivors reported the bus momentarily swerved several times before the accident.  The driver, who had been on duty for about an hour, was killed.

It is the worst bus accident involving Hungarians traveling in Europe since 1999 when 18 middle school students lost their lives and 27 were injured after a bus swerved off a steep road and plunged into a ravine near Deutschlandsberg, Austria.  A similar accident in 1991 in the vicinity of Trieben, Austria, claimed the lives of 16 passengers and wounded 21, reports index.hu.