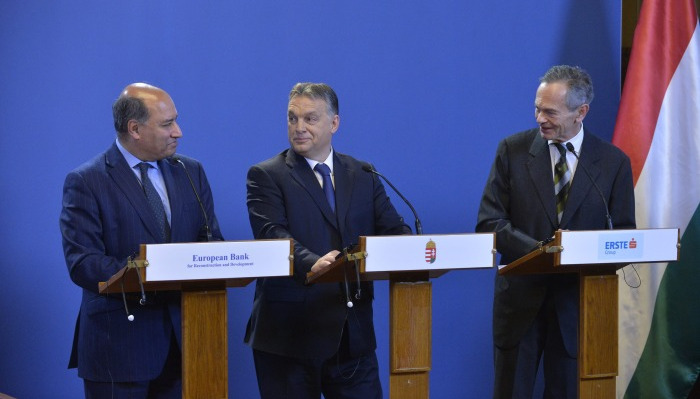 “This useless, good for nothing and nonsensical war that the government has been waging against banks has resulted in the disappearance of financing in Hungary” – Lajos Bokros, former minister of finance

The government of Hungary has signed an agreement with Erste Bank to purchase a stake in the Austrian banking giant’s Hungarian subsidiary, said Prime Minister Viktor Orbán on Monday at a press conference held with Erste CEO Andreas Treichl and European Bank for Reconstruction and Development (EBRD) president Sir Suma Chakrabarti.

Orbán said his government’s intention to purchase a stake in the bank is only part of the broader agreement with Este which will help the bank strengthen its position in Hungary. In return, the government of Hungary will reduce the bank tax in 2016 and 2017.

“A decrease in the bank tax is also part of the agreement,” Orbán said. “I’d like to remind everyone that when we introduced the bank tax, we made it clear that as soon as Hungary’s economy gets back on the track of growth, the budget is properly restored and the state’s debt is decreased, then we would return to the pre-financial crisis world of banking burden sharing.”

He continued: “This agreement will be implemented in stages. The stages are also outlined in the agreement so as to ensure confidence for the years to come. There will be significant bank tax decreases in 2016 and 2017, which we hope can continue decreasing through 2018 and 2019.”

Reunited and it feels so good?

Orbán announced the start of a new era. “We aren’t the nicest guys in Europe but we always stick to our agreements,” he said.

The Hungarian budget can make do with less revenues from the bank tax if there is an increase in lending, and Hungarians can expect more affordable financing and more jobs, said Orbán.

The prime minister believes Hungary has accomplished its goal of creating a “national banking system” (meaning more than 50 percent of Hungary’s banking sector should be owned by Hungarians), and he also thinks his government has been successful in helping do away with the sense that the banking system is not being adequately supervised. All of this coupled with good governance means a higher standard of living and more jobs for Hungarians, boasts the Prime Minister.

EBRD president Sir Suma Chakrabarti said the agreement sets a good foundation in the banking sector for a successful economy and emphasized Hungary’s need for a more effective banking system. A good economy needs strong banks and these banks are important for foreign and domestic investors, he said.

Erste CEO Andreas Treichl said the agreement is important for his company because the previous years have been difficult. He said that if Central Europe doesn’t experience growth, then Europe doesn’t have a good chance on getting back on a normal economic path.

Treichl announced that he invited the government of Hungary and the EBRD to be partners in their Hungarian division, and offered them both a 15 percent stake in the business.

Responding to a question from the press, Orbán said the government of Hungary would like to acquire a 15 percent stake in the business assuming an agreement following a thorough review of the company. However, the government would only acquire as much of Erste’s Hungarian business as the EBRD intends to purchase.

It could hardly be said that relations between government and Erste have been cordial in recent years. Treichl had been critical of the government’s 2010 bank tax. The move hurt profits and slowed lending in the country. Combined with the 2011 government-mandated early repayment scheme for borrowers affected by foreign currency exchange-denominated loans, the relationship between the government and Erste only grew more tense.

“We allow ourselves to be ostracized by such hostile economic policies, that are causing Hungary great harm,” Treichl said in a 2011 interview. He then made it clear that investments will continue to leave Hungary if the legal environment continues to be so unstable. Erste closed dozens of consumer banking locations toward the end of 2011, citing the bank tax and government’ early repayment scheme for foreign currency exchange-denominated loans.

In 2012 Treichl said Hungary’s difficult political situation was making it hard to give direction to their Hungarian division. “This has cost us a lot of money,” he said.

In 2014 Treichl said Erste had a presence in Hungary before Viktor Orbán and that Erste will still be in Hungary after Orbán. “The current situation isn’t only painful for our company, it’s also bad for the country, but we’ll survive,” he said.

What do the experts think?

“This useless, good for nothing and nonsensical war that the government has been waging against banks has resulted in the disappearance of financing in Hungary,” said economist and former minister of finance Lajos Bokros.

“A lack of financing puts a stop on everything, said Count Istvan Szechenyi many years ago,” Bokros reminded viewers.

Bokros gave credence to the remarks Erste CEO Andreas Treichl had made since 2010.

“It has to recognized that a small open European Union economy [as Hungary’s] which has no oil, no gas and no exploitable raw materials, such an economy needs to do more to promote a competitive economy,” Bokros said. “This can only happen if there are investments, be they foreign investments or domestic. Money is what’s needed for investments, and financing is an integral part of investing. Consequently, if we want to live in a ‘higher well-being economy’ then we must realize that financing and the banking sector is an indispensable tool for us.”

Bokros thinks the government’s intention to purchase a stake in Erste’s Hungarian division is waste of taxpayer’s money. However, he does see the rationale for the EBRD and Erste.

According to him, it makes sense for the EBRD and Erste to make this move because it allows them to expand using someone else’s capital.

“If this acquisition is to take place through a capital injection and purchase of new shares, not a purchase of existing shares, then the current owner, which is 100 percent the Erste Banking Group, will be overjoyed because their capital in this particular enterprise will be increased by 15 percent by the government of Hungary,” Bokros reasoned.

“If the acquisition is being made to simply help Erste grow its business, then what is happening is that [the Hungarian government] is compensating for the robber state’s action over the past few years when it took a bite out of Erste’s capital with its banking sector taxes,” said the former minister of finance.

Economist Maria Zita Petschnig concurred with Bokros’ assessment, telling ATV this morning that the government was using the purchase to conceal the fact that it was abandoning its “freedom fight” against Hungary’s banking sector, but warned that acquiring 15% of the bank could end up costing Hungarian taxpayers “many tens of billions of forints.”   She believes the government signed a kind of strategic agreement with the bank in which the state is to receive an ownership interest in the bank exchange for agreeing not to introduce any more discriminative measures and to dismantle existing ones, such as the moratorium on foreclosures.   However, she points out that this does not mean that the bank would start lending money to companies as this depends primarily on the economic circumstances.