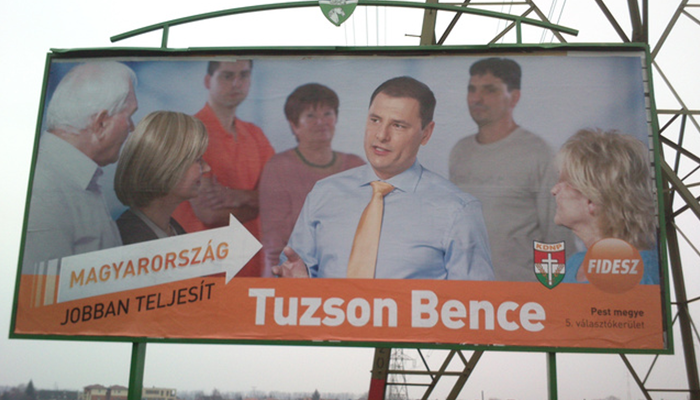 Never in the history of post-communist Hungary has so much taxpayer money been spent promoting the reelection of the governing party. Since the official start of the Hungary election 2014 two weeks ago the Orban government has publicly committed to spending some HUF 1 trillion of taxpayer money on various projects and/or the assumption of municipal debt writes hvg.hu.

On 16 February Viktor Orban used the occasion of his state of the union address to formally kick off Fidesz’s 2014 campaign for reelection on April 6.  Saying virtually nothing of substance, Orban told Fidesz-KDNP supporters to “blow the horns and saddle up” in the interest of defeating Hungary’s communist oppressors once and for all (even though Hungary has been a multi-party democracy for nearly a quarter of a century).

Hvg.hu reports that since Orban’s speech members of the government have fanned out across the country to announce in person the construction of large scale projects and/or the assumption of municipal debt at public events which, like the so-called “household utility cost consultations” of the past four months, are really Fidesz political rallies.

On 14 February Fidesz MP and Minister for Justice and Governmental Activities, Tibor Navracsics travelled to his home city (and electoral district) of Veszprém to announce the government would assume HUF 600 million in municipal debt arising from the construction of a new municipal sport arena.

On 24 February Minister of Defense, Csaba Hende, dedicated a new creative institute in the western city of Szombathely where he is running for parliament.  (The various artists attending the event must have wondered what the Minister of Defense was doing there).

On 20 February Fidesz MP and state secretary for foreign affairs at the office of the Prime Minister, Peter Szijjarto, announced in Tatabanya that the national government was to assume HUF 6 billion (USD 23.5 million) of that city’s debt.  On the same day Fidesz MPs Janos Lazar and Zoltan Pokorni announced the construction of a new border crossing station in the southern border city of Mako.

Hvg.hu reports that a government decree dated 4 February transfered the “Hungary is doing better” campaign slogan and logo, on which the government spent nearly HUF 800 billion promoting in 2013, to Fidesz free of charge.  Less than two weeks later hundreds of Fidesz billboards have appeared throughout the country featuring the “Hungary is doing better” slogan and artwork under a photograph of the Fidesz candidate for that district doing something for which Fidesz MPs are not especially well known–actually talking to the constituents they purport to represent.