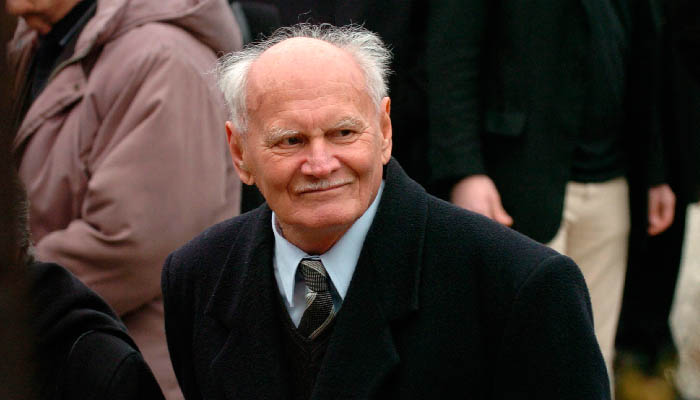 Hungary paid its last respects to former President Arpád Göncz at Budapest’s Óbuda cemetery last Friday. Held in accordance with Göncz’s final wishes, the funeral was not a state funeral but a private event open to the public. Göncz ranks as the most popular Hungarian president to date and was commonly referred to as the “nation’s grandfather”.

The ceremony was attended by many thousands of people. Hungarian citizens, entertainers, academics, diplomats, politicians, and foreign and domestic government officials filled Plot 16 of the cemetery to bid him farewell.

Imre Mécs, a long-time friend and activist, delivered a eulogy in which he said Göncz, as president, “saved Hungary’s rule of law from errors that couldn’t be resolved during roundtable discussions at the [fall of communism]”.

“[Göncz] became the best-ever president of the Republic of Hungary,” Mécs said.

The former president’s long-time friend and confidante then reminded Hungarians that Göncz set the bar high for all those who came after him.

“[Hungary] really needs your personality and it would be great if there would be lots of Árpád Göncz’s in this country — or at least people who are like you,” Mécs said. “You were a man, a man of the people.”

Mécs then invited everyone to Kossuth Square following the funeral to take part in a separate memorial. (The speech Mécs delivered at Kossuth Square can be read here).

Márton Benedek, the grandson of Göncz (through his daughter Kinga), also spoke at the funeral. Benedek briefly recounted the life of his grandfather, how Göncz met his wife, his fight against fascism and communism, and the emphasis he placed on being humble and showing compassion towards others.

Following the brief speeches from Mécs and Benedek, entertainers János Bródy and Zsuzsa Koncz performed a song known to be a favorite of Göncz — “Ha én rózsa volnék” (“If I were a rose”).   During the final verse, the funeral attendees all raised a single rose into the air and sang along with Bródy and Koncz.

This verse was perhaps the most emotional part of the funeral. Many could be seen wiping tears.

“Göncz was a great president because he was a simple man,” one attendee told the Beacon.  “He did not mix his position with party politics and he had clean hands. He was a respectable man who served the country well.”