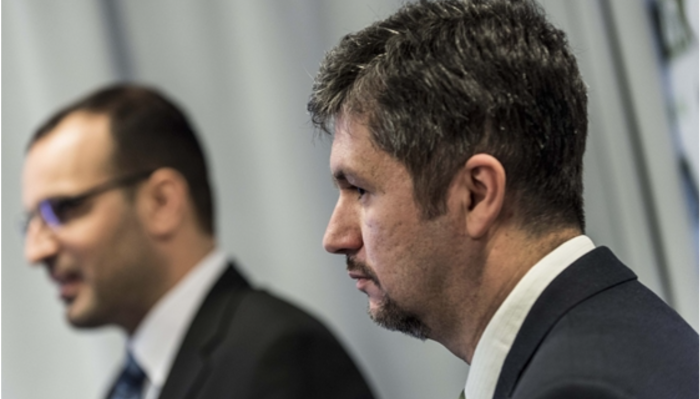 At the second of a series of weekly exposés of specific instances of government corruption, Politics Can Be Different (LMP) politician Ákos Hadházy asserted on Thursday that the government nationalized and centralized public education in Hungary in order to facilitate the theft of EU funds.

“The reason we have to use the idiotic textbooks and education program is because otherwise the EU would ask that the funds be returned,” said the anti-corruption activist.

Hadházy said that to date the government had spent HUF 30 billion (USD 110 million) on educational reform, and among the expenses were hundreds of millions of forints worth of orders given to “alibi companies”.  He said the much criticized school-leaving exams had been written by “phantom companies”.

Recently the Research and Development Institute issued a 244-age report entitled “Role and functional changes in the world of public education” which concludes that responsibility for maintaining public schools was entrusted to a closed, overly centralized, bureaucratic institution incapable of funding schools in an efficient and cost-effective manner.  The study implies that EU funds paying for the reforms enacted under the second and third Orbán governments were effectively squandered.

The opposition politician called “outrageous” the fact that the three institutions paid for 1300 days of “expert advice” at daily rates of between HUF 50,000 – HUF 80,000 per expert.  He believes that hiring so-called experts to develop new admission exams and school-leaving exams was just another way of stealing EU funds.

The LMP politician believes the HUF 2.6 billion (USD 9.5 million) paid Microsoft Hungary to develop the “national education portal” was a complete waste of money.  Fellow LMP politician and member of parliament István Ikotity accused the government of spending money earmarked for education reform on other objectives.  He pointed out that the current undersecretary responsible for EU funds, Tamás Köpeczi-Bócz, also served as a deputy undersecretary in 2005 under the Gyurcsány government.

Hvg.hu reports that the Education Authority responded to the allegations by claiming that it was little more than a politically motivated attack in the field of education.  The authority believes the public tenders took place in a lawful manner and that the funds were used for the stated purpose.