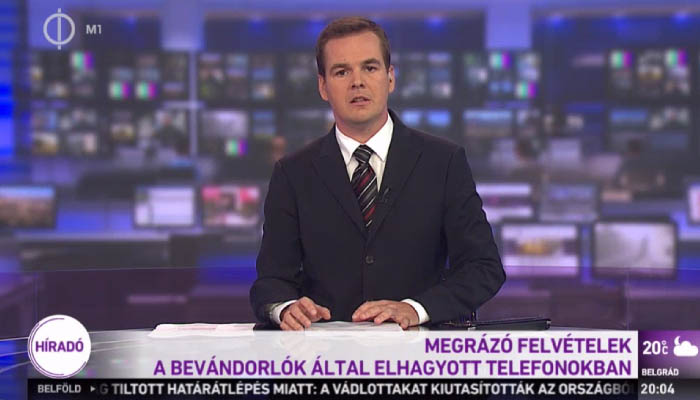 Those (un)fortunate enough to find themselves watching Hungary’s state news channel last week may have caught a string of stories concerning cell phones allegedly left behind by refugees passing through Hungary.

Refugees, the story goes, have left cell phones in Hungarian fields only to be found later by a local member of the Betyársereg – a radical right-wing group with a penchant for violence. Hungary’s state-run main television broadcaster (M1) and state-run news wire (MTI) have been reporting on the alleged contents of the mobile phones in speculative news stories apparently concocted for the purpose of manipulating Hungarian public opinion into believing that terrorists–actual or aspiring–are among the refugees fleeing overcrowded camps in Turkey, Jordan and Lebanon for Europe.

Hungarian news site hvg.hu recently published an outstanding article that points out the extent to which Hungary’s state-run media has gone out of its way to foment mass hysteria.

M1 has been running stories containing “shocking footage” of the contents of mobile phones allegedly left behind by asylum seekers. MTI has been taking M1’s reporting and passes it along as bonafide news. In the copy-cat world of Hungarian media, the story is quickly picked up by more and more outlets as fact. The end result is that the “migrants” are allegedly carrying video footage of beheadings, pornography and terrorist training.

M1’s story begins with a local man (wearing a Betyársereg shirt) volunteering to show to state media some footage on a newly discovered mobile phone. Not only do the state-run media reporters elaborate on the shocking videos and photos on the mobile device, they also provide commentary: “Whoever owns this device, or who uploaded the content to it, must be very familiar with the views of radical Islam”.

In another report, a “security professional” says that anyone with videos of beheadings on their mobile phones “either sympathizes with terrorists or are themselves terrorists” because healthy people wouldn’t download “and enjoy watching such things on their telephone”.

Footage of child soldiers is then shown, only to be followed up with more scary commentary by another pro-government security “analyst”, György Nógrádi.

As hvg.hu points out, such methods of reporting raise numerous legal and ethical questions. Are reporters legally permitted to access the information on mobile phones they find?  If so, is Hungary’s state-run media interfering with something that warrants an investigation if it runs stories on what it finds in such phones? Is there reason to be concerned, from the perspective of media ethics, if state-run media then runs stories based on material that has been manipulated?

Looking at the source

Even M1 admits that a viewer contacted them about his findings. According to hvg.hu, this same viewer just four days earlier made a (more detailed) statement about his findings on the Betyársereg website. The site also contains information regarding the paramilitary group’s volunteer border protection activities, including how they used a whip to force refugees who crossed the border to sit down on the ground. One may also become acquainted with statements on the website, such as “murdering someone … our newly arrived enemies in need of aid is just as commonplace as a cup of coffee is in the morning for us”.

Hvg.hu asked the Hungarian Civil Liberties Union (TASZ) what it thinks about this string of reports by state-run media. TASZ questions the legitimacy of the source to begin with. On what grounds can a “viewer” keep a telephone he/she finds only to turn it over to state-run media? On what grounds does state-run media hold its new acquisition and hand it over to so-called experts? If the phone belongs to a terrorist or a spy, it may present a serious matter of national security to make its contents public. If it does not belong to a terrorist or spy, then whoever made its contents public may be seriously violating privacy laws.

Looking at the phone, reviewing what is stored on it, and saving its contents onto computers may constitute unlawful data gathering and be subject to criminal punishment — crimes punishable for two- to three years incarceration.

But don’t hold your breath.  In its desperation to justify its hard-line policies on migrants, the government will proffer as “evidence” anything that remotely suggests that among the asylum seekers are terrorists.

Why didn’t state-run media turn to the Hungarian authorities after receiving this footage? Hvg.hu reports that M1 has not yet answered that question.

There are cases, of course, where a situation may arise in which the public’s right to know may outweigh privacy laws, TASZ says. However, M1’s reporting on the contents of the mobile phones found does not constitute such a situation, according to the civil rights defender.  The reports are purely speculative. Beyond pointing out that a phone allegedly had pornography and extreme violence on it, the reports offer no other facts.

M1 has reported that Hungary’s counter-terrorism unit, TEK, is reviewing the videos to find individuals connected to terrorism and more reliable information as soon as possible. Hvg.hu reports that TEK won’t have an easy time investigating the videos because, according to criminal law in Hungary, there are strict rules governing the treatment of mobile phones and other IT gadgets as evidence.

Part of Fülöp’s job is to make sure that various types of IT gadgetry are secured in a manner that allows the gadgets to be used as evidence later.

“It would be like someone taking a mobile phone into the police station to show them the kind of videos that are on the phone. But when were the videos loaded onto the phone? Who uploaded the videos? Could the uploader have manipulated the date of the upload? There are many questions like this, and that’s why it’s important for the person [who found the phone] to be present when the phone is seized by police so that a statement can be taken. If this isn’t possible, as in this particular case, then it wouldn’t hurt for police to look for other witnesses at the scene,” says Fülöp. The investigators can credibly investigate the content after these steps are followed, he says. “If the phone was unlawfully collected by police, it will be very difficult for the authorities to treat the phone as legitimate evidence.”

“I’ve seen cases where we were precisely able to establish the IP address of a computer that was involved in a crime,” say Fülöp. “That doesn’t necessarily identify the perpetrator if multiple people used the same computer. If a telephone was used by multiple individuals, how can you prove who used the phone for what purposes?”

The story of the mobile phones allegedly belonging to refugees also calls into question the credibility of state-run media from the perspective of media ethics and responsibility to inform the public.

Hungary’s media laws don’t really make sense though. If they did, the Media Council would be all over M1 for its reporting of the cell phone story.

Hungary’s Media Council recently launched a procedure against Magyar Hírlap for publishing an interview with former prime minister Péter Boross in which he said refugees “don’t only have a different culture, they have also have a different value system, biology and genetic characteristics as well”.

The Media Council called the interview “grounds for misleading the public with stereotypical opinions about the immigrants”.

Hungary’s state-run television and its news programs have been markedly anti-refugee in reporting the refugee crisis. News has frequently been reported that is either unverified or an outright fabrication, as in the case of the refugee who was wrongly accused of attacking someone with a knife in a Tesco parking lot, or the “terrorist” apprehended at Röszke.