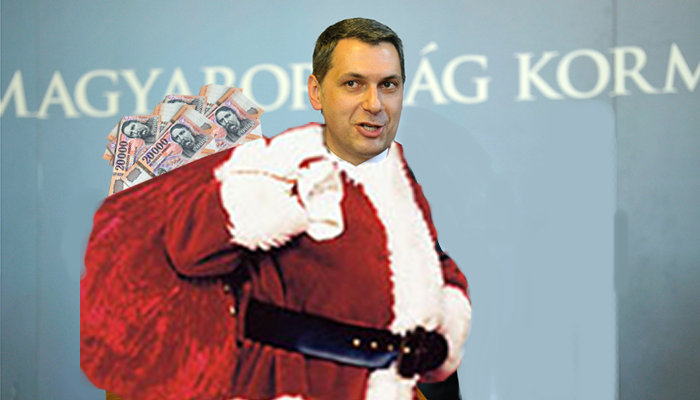 Minister Overseeing the Prime Minister’s Office János Lázár presided over this year’s final Kormányinfó government press conference, the 39th of the year. After a 30-minute delay, Lázár opened the gathering by saying he was proud of the government’s achievements in 2016, including the passage of 192 laws, 148 of which the government itself initiated, and the negotiation of 25,000 pages worth of material in 34 parliamentary sessions, including the final of the year on Wednesday. The next session will be at the beginning of January.

Lázár announced government plans to distribute HUF 200 billion (USD 676 million) by the end of the year to various institutions and industries, with the largest portion going to raise retirement benefits for pensioners by 1.6 percent. Additionally, the public health-care system would receive HUF 80 billion (USD 270.4 million) to settle hospital debts older than 30 days, and to establish a hospital development fund. Lázár did not give further details on the distribution of the money but acknowledged that educational and social institutions would be renewed, and the military would receive money to buy transport vehicles. Cultural institutions, NGOs and sports institutions would also benefit.

Lázár said the EU’s goal during the upcoming final summit of 2016 in Brussels will be to “push Hungary into a corner” on its immigration policy, and a debate is ongoing in the EU between those who want to “organize immigration and those who want to stop it.” He said that maintaining the EU’s immigration agreement with Turkey is of utmost importance, which is of concern to the Hungarian people who “rejected uncontrolled immigration.” Far fewer immigrants arrived at Hungary’s borders this year than last year, he said, and returning to the question of asylum quotas, said there is a difference between voluntary and involuntary quotas.

The government approved a request from the Ministry of Defense to create 197 firing ranges over the next three years, at a cost of HUF 27 billion, that is, USD 91.6 million, or USD 465,000 per firing range. Twenty-five-, 50- and 100-meter-long ranges would be installed, and shooting clubs created along with clubhouses. There is a real chance, Lázár said, that within three years every major county town will have a 100-meter shooting range.

PISA and other OECD data

The government will begin investigating OECD health-care system data each January from now on, Lázár announced, and will further investigate recent PISA test results that indicated the worst performance ever on the test by Hungarian students. Lázár said the results unfortunately reflect “demographic differences,” in addition to his earlier claims that teachers and not the government were responsible for the poor results.

It was a correct decision to relocate numerous government ministries to the Castle District, Lázár said, because it has brought in large investments and will result in the restoration of rundown buildings. The Office of the Prime Minister will move into the Castle next year, and renovations in preparation for the move alone have cost HUF 10-15 billion (USD 33.8-50.7 million) per year of taxpayer money.