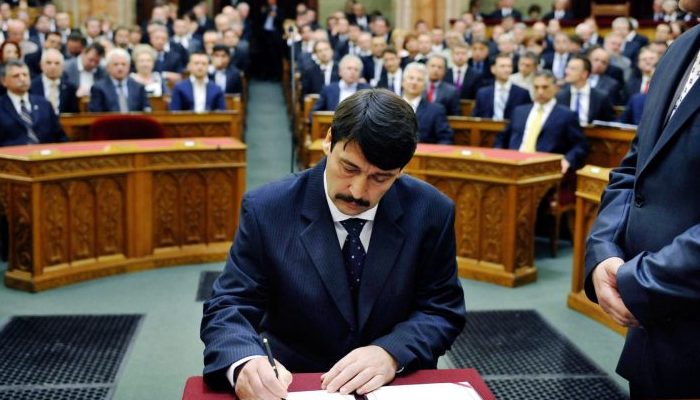 Daily online index.hu reports that Hungary’s democratic opposition leaders had the following to say about President János Áder’s decision to sign the modification to the law on higher education, aka “lex CEU,” that would force Central European University to close its doors later this year.

“János Áder has proven that he is unsuitable to be president of the republic.”

MSZP candidate for prime minister, Szeged mayor László Botka, promised that if his party comes to power it will repeal the law.

“You know ‘Mr. President’ that you are also a rascal,” posted DK founder and chairman Ferenc Gyurcsány to his Facebook page, calling Áder a former democrat who has become as craven a politician as his former political opponents.

“Even Áder’s grandchildren will bear the shame of their grandfather killing a university,” announced LMP co-chair Ákos Hadházy.

“János Áder has not rejected his past and has taken a dishonest, spineless decision worthy of a Fidesz politician,” posted the small liberal party to its Facebook page, adding that it intends to turn to the Constitutional Court and later the European Court of Human Rights in Strasbourg because the destruction of CEU goes against the freedom of universities, educational freedom, and freedom of thought.

“Áder is a cadre (a politically controlled appointment to an institution in order to circumvent the state and bring control to the party-ed.) who has become unworthy of his office.”  The small opposition party led by anti-corruption crusader Péter Juhász believes that with the act of signing the bill into law, Áder has proven that he is incapable of not imposing Fidesz’s point of view on important constitutional issues. From this time forward, Együtt does not consider Áder to be the legitimate president of the republic, and encourages the other opposition parties to adopt a similar position.

“The president of the republic embodies national unity in the following manner: when 80,000 demonstrated against a stupid legal modification that is clearly tailor-made for one entity, but in the end is harmful to all of society, János Áder hides behind laws,” wrote the recently founded opposition party, adding that the president considers his position more important than “the voices and opinions of 80,000 people.”