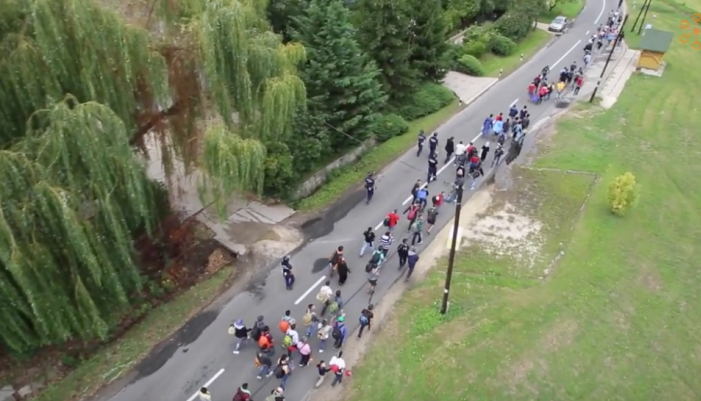 The Budapest Beacon aspires to praise what is praiseworthy and criticize what is not.

In our estimation, the Hungarian police have performed their jobs admirably under extremely difficult circumstances.

Over the past few few months the Hungarian media has been flooded with images of Hungarian police appearing to employ excessive force rounding up migrants, preventing them from leaving camps, or deterring them from crossing the temporary razor fence erected along the border with Serbia this summer.

The decision to dispatch police to Keleti station earlier this week to prevent asylum seekers boarding westbound trains only served to reinforce the notion that the police are, at best, indifferent to the plight of the thousands of Syrians, Afghans and Pakistanis passing through Hungary at any given time.

However, if no serious harm has befallen any of the more than 160,000 asylum seekers transitting since January, this is largely due to the professionalism and diligence of the Hungarian police in protecting them.

On Friday afternoon several thousand asylum seekers set out for Vienna on foot via Hungary’s busiest motorway, the M1.  That nobody was hit by a car or assaulted by right-wing extremists over the course of the nine-hour journey is because the police closed the outermost westbound lane to form a cordon sanitaire between the people and traffic.  And wherever exhausted asylum seekers bedded down for the night between Biatorbágy and Herceghalom, police kept watch over them.  They allowed hundreds of private individuals to distribute water, food, and clothing even as they prevented right-wing extremists from approaching the makeshift camps.

Prime Minister Viktor Orbán has sought to score political points by appearing tough on so-called “illegal migrants” who, according to government propaganda, transmit infectious diseases, are prone to terrorism, and have little respect for either Hungarian culture or laws, even though such assertions are clearly baseless.

However, a close examination of photographs taken yesterday and today–including the one at the top of the article taken by drone of asylum seekers walking from the camp in Bicske to Tatabanya–reveals that in nearly all cases they were accompanied by policemen, either on motorcycle or on foot.  And while government propagandists may argue a heavy police presence was necessary to protect Hungarians from invading hordes of diseased terrorists, there can be no doubt that, in fact, the police were instructed to protect the walkers by accompanying them over the course of their journey.

We find little that is praiseworthy about the current Hungarian government.  However, we wish to commend Minister of the Interior Sándor Pintér for instructing the police to escort asylum seekers to safety.  We also wish to thank the thousands of Hungarian police men and women for the professional and diligent manner in which they performed their tasks.  You are Hungary’s finest.