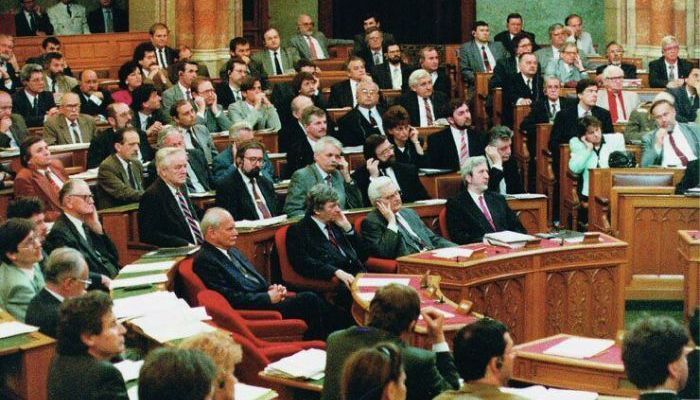 Today marks the 25th anniversary of the first free elections to be held in Hungary after 1947.

As a part of the eastern and central European regime change of 1989-90, the Hungarian Republic was proclaimed on the 23rd of October 1989, and the rule of law Constitution came into force.

Mátyás Szűrös, acting President of the Republic announced for the first round of parliamentary elections to be held on the 25th of March, and the second one on the 8th of April.

All twenty regional elections were declared valid, meaning that more than half of the constituents voted. Voter participation ranged from 53.71% in Szabolcs-Szatmár-Bereg county to 76,81 % in Vas county.  In Budapest 71,18 % of eligible voters went to the polls.

The first round was valid in 5 individual constituencies. This meant more than half of the constituents voted and a candidate received more than half of the votes. In these constituencies there was no need for a second rounds. In Szerencs, the 11th electoral district of Borsod-Abaúj-Zemplén county, Miklós Németh ran as the MSZP (Hungarian Socialist Party) candidate, receiving 59,97% in the first round. However, the best result was reached by Szeged politician Zoltán Király. Politician from Szeged ran in the colors of MDF (Hungarian Democratic Forum) in the 2nd constituency of Csongrád County, and finished first place with 65,47 %, out of ten candidates. Second runner-ups achieved results under 10 % in both Szerencs and Szeged.

In the first round six parties were selected into Parliament from the list, on the 25th of march. Based on the 4 911 241 valid votes cost the order of the first nine was the following:

The Party of Enterpreneurs came in 10th place, with less than a hundred thousand votes, under 2%.

In the case or the county regional lists, MDF came in first place and SZDSZ second. In Budapest MSZP placed third and Fidesz ended up fourth.

MDF stood on the podium in twenty regions, while SZDSZ performed worse in only one place: FKgP, MSZP, MDF was the order of the first three, SZDSZ came to the fourth place in Somogy County. SZDSZ won in five counties of Transdanubia, Baranya, Fejér, Győr-Moson-Sopron, Komárom-Esztergom and Vas; MDF was second in these counties. There was no county beyond Somogy, where neither MDF or SZDSZ won. Beside Budapest and Somogy county, MSZP was finalist in BAZ county, where they reached the third place – while they were 6th in Tolna.

Hungary’s current Prime Minister, Viktor Orbán, ran for parliament in Budapest’s 13th electoral district. He called out all of his serious opponents for debate. The discussion with free democrats Miklós László and László Róbert, both deceased, was held in a crowded cultural house. The two debates were broadcasted on television.  Gyula Zacsek from MDF did not stand out against Orbán. Our colleague –who participated in the event – recalls that Orbán was the obvious winner of both debates, helping him take 20.33% of the vote in the first round of national elections in his district.  Receiving 35.33% of the vote in the first round, Zacsek won the second round with 60.42% of the vote.

Different alliances worked quite hectically. László Kövér won as a joint Fidesz-SZDSZ candidate in Pápa, while in Várpalota also in Veszprém county, Fidesz and SZDSZ did not run a common candidate, but rather mightily contested the second round of the election, with the result that the MDF candidate ended up winning the second round with 47,93% of the vote.

By the way SZDSZ-Fidesz: an eclectic coalition was created in Nagykálló, where Kristóf Kállay ran on the election as a candidate of SZDSZ, Fidesz and KDNP, and defeated his opponent, yeoman Bertalan Kun confidently. Finally, Kállay joined the then existing independent faction, where he remained until 1994. (The independent faction was a colorful formation.  Beginning with seven members at the start in 1990 it grew to 37 by the end of 1994 to include skinhead supporter Izabella Király B. and the zionist opponent of the Kádár-era, György Gadó.)