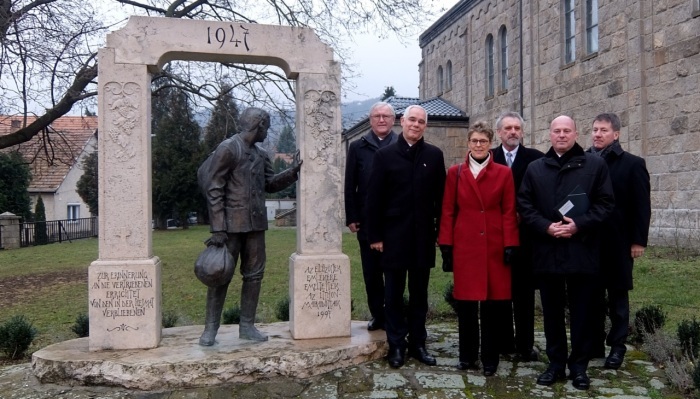 Near the main entrance of the cathedral in the medieval Transylvanian city of Sighisoara (Segesvár) there are two marble plaques.  One contains the names of young men killed during the Second World War.  The other, much longer one, contains the names of those who perished in forced labor camps in the Sovet Union.

Many of the family names appearing on the two plaques are the same.  The elderly tour guide explains that when the German SS came, it impressed the German boys into military service, and each was given an SS tattoo to prevent them from deserting.

According to the elderly women, after the German defeat Russia troops summarily executed any solder in their captivity bearing the SS tattoo, and deported their immediate families—parents, brothers, sisters and children–to coal mines, steel mills and oil fields in the Soviet Union.

Our tour guide explained that she was only twelve when her family was deported, and she labored in a coal mine for seven years without once seeing the light of day.  By the time her family was allowed to return seven years later, her parents were dead.  “There were no German boys left so I married a Romanian,” she told us.  “He was a good man and treated me kindly, even though the years of hard labor had destroyed my ability to bear children.”

On Sunday while Hungarian Holocaust survivors commemorated the liberation of Auschwitz at Budapest’s Dohány Street synagogue, a separate ceremony was held in Dunabogdány, north of Budapest, (pictured) to commemorate the 130,000 German Hungarians deported to the Soviet Union immediately after the Second World War, and the additional 200,000 deported to Germany the following year.

Speeches were given by Zoltán Balog, the Minister for Human Resources, Hartmut Koschyk, German commissioner responsible for resettled and displaced German minorities, and Ottó Heinek, president of the Hungarian German Country-wide local government.  Heinek said it is inconceivable that people continue to be persecuted and killed on the basis of race and religion.  He told the small crowd “we stand on the side of those who do not support such policies or ideologies that stigmatize or punish other people or groups on the basis of their origins.”

Below is an English translation of his speech.

This is the third occasion when we assemble on the memorial day of the chasing out of the Hungarian Germans from their homeland, to honor the suffering of those humiliated and disenfranchised and whose humanity was violated at the end of the Second World War.  We remember those swallowed up by the Soviet forced labor camps for years –for many forever.  We remember those who were thrown from their homes and forced into domestic internment camps, as well as those forced to leave the land of their birth.  In a letter he sent on the occasion of the unveiling of a memorial in Szerencs, President János Áder wrote at the end of last year that “these were members of a hard-working, law-abiding, and country-enriching people”.

January 19th is the day of remembrance proclaimed by parliament as a symbolic date of their being chased away.  It was on this day in 1946 that the first train left Budaörs for Germany with those being chased away.  Allow me to speak about those taken away, since it is a jubilee year.  It has been exactly 70 years this week since the deportations to the Soviet forced labor camps took place.  On December 22, 1944 the Red Army issued order 0060 ordering the deployment of every man between the age of 17 and 45 and every person between the age of 18 and 30 of “German extraction capable of work” for “public work in the immediate hinterland”.  We know that this so-called “small labor” affected Germans in other countries as well–Romania, Yugoslavia, Czechoslovakia–and that Germans were not only expelled from Hungary.  Research shows that some 130,000 were deported from Hungary.

“They always took them away at night, and that was when the trains ran.  By day they stopped.  Where they were taking us, we did not know.  We cried like small children, we prayed on our rosaries and sang holy songs.  And we told stories about what they were baking and cooking at home,” recalls a survivor.  We now know that the “immediate hinterland” was the Donyeck coal mines, factories in the Urals, or oil fields in the Caucasus.   “Immediate hinterland” “ they took us at night” – those giving the orders and executing knew exactly that what they were doing was inhumane and unlawful, in fact, it was as though they were ashamed of what they were doing.  It was the same thing when others a year later were removed to Germany.  They even called the 200,000 chased out of the land of their birth those who were being settled home.

With the day of remembrance the Hungarian parliament took an important and exemplary step in the direction of properly interpreting the past.  It is time to take yet another step, and this is already for the Minister responsible for education to speak. I thank him for his devotion to this day of remembrance.  At the same time the parliamentary decision says that parliament “supports and calls for . . . the preparation of such educational materials that relate to the deportation, persecution, and chasing out of the Hungarian German community.  I am confident that within a short period of time this point of the decision will be realized.

Dear friends!  We say again and again: We Hungarian Germans stand in solidarity with peoples and groups who suffered exploitation and discrimination, and we condemn exclusion and every form of racism!  It is a good feeling and one of respect that we are strengthened in our conviction by the sympathies of our Jewish countrymen as well:  Mr. András Heisler, president of the Hungarian Jewish Faith Community, has written a letter to me in which he explains that he cannot be here today because they are commemorating the liberation of the Ghetto.  Allow me to close by quoting from this letter:  “I think it important to mutually acknowledge and respect the historical trauma experienced by our communities.  Let this be an example to the rest of society and a guide for youth, so that nobody should ever again have to experience the murderous passion and desire for revenge that the Jews and Germans suffered in Hungary”.