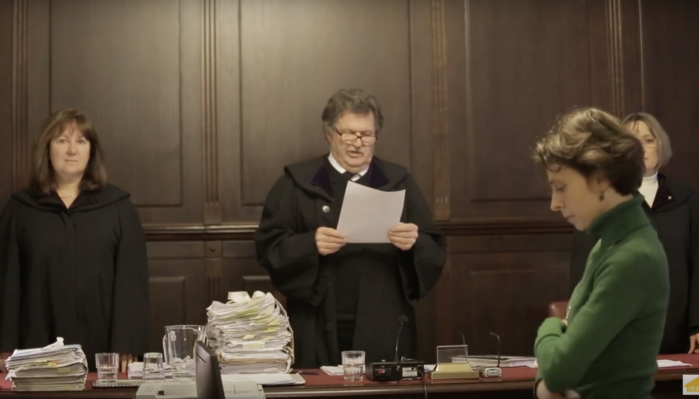 The Curia, Hungary’s highest court, made legal history Wednesday afternoon by announcing that it had mistakenly issued the wrong verdict earlier that day, reports index.hu.

On Wednesday morning the presiding judge announced the verdict in the case brought by the Hungarian Civil Liberties Union (HCLU) against the Heves County Police claiming the latter had not only harassed the Roma inhabitants of Gyöngyöspata by failing to disperse radical right-wing extremists in the Spring of 2011, but that it had violated their right of equal treatment by continuously fining them for minor infractions, such as walking in the road or riding a bicycle without a bell, both during and after the 2011 disturbances.

After appearing to overturn last year’s second-level court decision and ruling in favor of the plaintiffs on both counts, the court issued a statement Wednesday afternoon claiming that the presiding judge had mistakenly issued the wrong verdict.

According to the statement, although the Curia “found that the police had harassed the members of the Roma community in the matter of the patrolling and the demonstration,” “forbade the police from committing further legal violations,” and “upheld the first-level decision obliging the police to fulfill their responsibilities,” the explanation read aloud by the presiding judge “mistakenly maintained that the Curia had found the police guilty of harassment in the practice of punishing misdemeanors and of direct discrimination” which “contradicts the actual ruling.”

According to the statement given to the Hungarian News Agency (MTI), the Curia only ruled in favor of the plaintiff with regard to the failure of the police to disperse extremists. With regard to the charge that the police had fined the Roma inhabitants of Gyöngyöspata for minor infractions in a discriminatory manner, it turns out the Curia upheld the second-level ruling in favor of the defendant.

In the statement to MTI the Curia offered no explanation as to how it happened that the presiding judge issued the wrong judgement by mistake, or how it is that the part of the verdict read aloud in court does not count.

Through the looking glass

The HCLU responded to the extraordinary turn of events by issuing its own statement:

“We cannot understand the decision that goes contrary to the explanation, and we are awaiting the written explanation.  At present it is not possible to know on what grounds the Curia rejected — contrary to its earlier statements — our legal petition.”