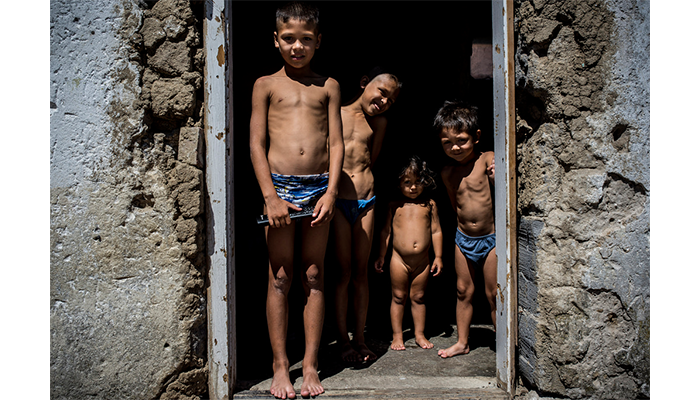 Their refrigerators are mostly empty but impoverished parents cook for their children every day in Rozsály and Tisztabercel, where the local government did not apply to the Ministry of Human Resources (Emmi) for funds with which to provide hot meals to children during the summer break.  The program would help hungry children, like the ones pictured here, but the local leaders were afraid that their parents would “give up the practice of cooking”.

“They had it so far but somehow it was left out this year,” concludes János Lázár sadly in the garden of his house on the outskirts of Rozsály, commenting on the fact that his nephews and nieces used to go to the school each noon to eat lunch.  Situated near the Romania border on the Szatmár plain, Rozsály is among those settlements that did not apply to Emmi for support within the framework of the anti-child poverty program.

The pensioner, who suffers from bad eyes and other ailments and must take a lot of medicine, says the children did not only go to school for the food but also to play with the other children.  “We also cooked at home and there was even some left over,” he says.   In the absence of the program this summer, they solve the problem of providing for the children themselves.   “What’s Ivett cooking?” he shouts in the direction of his wife by way of forwarding our question.  She is cooking noodles with cabbage and fried cauliflower on a stove next to a side building under a makeshift roof.

In Hungary between 36,000 and 54,000 children regularly go hungry, and another 200,000 do not get enough food from time to time.  For them, public feeding is especially important, not only when school is in session.  For this reason in 2002 the social summer children feeding was introduced, which regularly supplies hot meals to a number of Hungary’s poor.  A number of settlements applied to Emmi this year for funds with which to provide lunch to the children of families entitled to child protection support.

A lack of money, or will

However, the leaders of numerous settlements did not request the support.  When asked how they justified the decision, some local governments responded that the school kitchen was being renovated and could not prepare meals.  Elsewhere, they answered that they did not apply because of lack of funds necessary to cover the local government’s share of the costs.  But there were also settlements that deliberately did not submit applications.

Rozsály is one of those settlements.  It doesn’t depend on this whether they get something to eat, says the town notary.  He says the families can still solve the problem of providing for their children.  Many grow food for themselves in their gardens.  The settlement is an independent village.  When school is in session, the cafeteria prepares food which includes vegetables grown on local government-owned ground.

Be that as it may, there are others besides János Lázár who would have been happy if the program had worked this year, too.  And one of the authors of a study on this subject informed us that the the situation in the settlement of Fehérgyarmat is far from good.

The winter’s a bitch

Csilla and Béka are raising four children, two of whom will attend high school later this year.  The summer feedings would ease their burdens, primarily because they would perform more day labor if they didn’t have to cook at home.  Csilla says they prepared meat soup and noodles with cottage cheese on Tuesday.  According to her husband, it is not the summer season that is the problem but the winters, when there is no day labor and it is cold.

Furthermore, they do not expect to receive any firewood this year from the local government.  “The winter’s a bitch,” he says angrily before leaving to work in the fields.  Two doors over, Sarolta would have been happy if the summer feeding program continued, because she could have spent more time with her partner tending their cucumber patch.  She cooked a vegetable stew that day for her children who, she says half jokingly, would have preferred to eat pastry.

Many families grow cucumber in the village and in the region.  During the summer season they can earn several hundred thousand forints from a single cucumber crop.  They are cultivating a 1600-square-meter cucumber patch.  From the income, they had hoped to purchase a new house to replace the one they are currently living in, but the weather interceded.  After a hailstorm at the end of May destroyed their crop, they had to replant, and the current crop is not expected to bring in as much money as they had hoped.  For this reason, the move is uncertain.

In the Gypsy row nearly every second household cultivates cucumber.  Dense rows of cucumber vines climb the wire net stretched between poles.  During our visit early Tuesday morning many of them of the people were mixing fertilizer with irrigation water which is delivered to the base of the stem via a drip-irrigation system.   The equipment, the pump, the irrigation pipes, the fertilizer, the pesticide and the seeds they receive on consignment.  The cost of this is deducted from the money they receive for the delivered cucumbers.  However, it involves a lot of work.  They have to get up at dawn to pick the ripe cucumbers before it gets hot, and take them to the collection site where they are sorted by machine.

In neighboring Tisztaberek 70-75 percent of the children go to bed hungry, according to Béla Bak, a member of the minority Roma local government, and for this reason the summer feeding program would be needed in the settlement, which did not apply for the funds.

He is not alone.  “I’m not saying that the children don’t have what they need but they should receive what they are entitled to,” says Éva, who is raising four scrawny children.  She cites the example of nearby Túrricse, which applied for and obtained funds.   Éva says she cooked haricot beans with cabbage on Tuesday, which the children ate because they are not picky.  The woman thinks it would be good if the local government would feed the children in summer, because then she could also accept day work towards the end of the month, in which case the family’s income would be twice what it is when she has to stay at home to watch and cook for the children.

A family living in the neighboring street also misses the summer feeding but says they manage to find a way to feed their grandchildren.  The one’s favorite is noodles with poppy seed, which they had for lunch the previous day.

Here on the corner of Haladás street an argument breaks out among locals gathered in the shade of a scrub tree over whether children in the settlement are, in fact, being systematically fed or not.  András Lázár, who often helps the local government, reports that it is possible to eat three times a day in the community building, but that one family went there two weeks ago and did not receive anything.  “They said they were doing away with it for lack of funds but then they didn’t,” he says.

It is possible to eat at the community building but this is not being organized by the local government, but a community association.  Here they also entertain the 15-20 children who go there regularly.  Sometimes they only get a slice of bread or two, sometimes cooked food, or sometimes vegetables. Sometimes they also cook food in a large cauldron but the funds available for this are limited.

“The parents are losing the habit of cooking,” says mayor Géza Kónya (Fidesz-KDNP), who believes summer feeding programs are not good for this reason, among others, when asked to explain why his town did not apply for funds with which to feed children in summer.  The other reason was the habitual dissatisfaction: “There was always an argument over who received how much and who didn’t”.   For this reason the local government prefers to provide direct aid to those families whose children would have been entitled to participate in the program.  If they had applied, it would have cost HUF 3 million but this way they paid more than HUF 6 million to the families of the roughly 200 affected children (!!!).  The mayor thinks that this way “it is much easier for the parents to purchase exactly what they want.”

Kónya acknowledges that a lot of children go hungry for reasons beyond their control, but believes that if somebody has children, they are responsible for raising them properly.  There are a lot of poor people but there are also a lot who are worthy of note for raising their children well, he says.

An earlier study prepared on this subject discusses in detail the local governments’ reasons for rejecting such programs.  The authors spoke about how often parents do not dare acknowledge that their children do not get enough food for fear of having them taken away by the child protection authorities.  In any case, it was interesting to experience that the majority of families we spoke to in Rozsály and Tisztabercel hardly had anything in the refrigerator, if they even had a refrigerator.