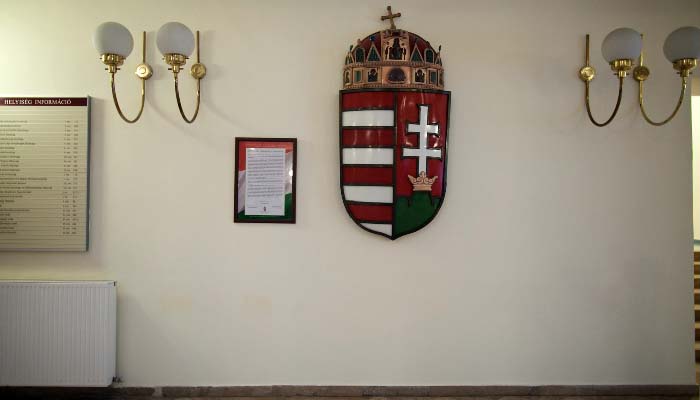 Hungary’s new constitution, the Fundamental Law, is five years old. When it was written, Prime Minister Viktor Orbán said it was as firm as granite. Since then, ruling party Fidesz has rewritten it five times. They put things in it that the Constitutional Court removed from it, so Fidesz put it into the constitution that things can only be removed from it when the EU voices concerns. There have been countless demonstrations against it, but now the government is spending HUF 10 million to celebrate it.

“Dear ladies and gentlemen, we Hungarians have provided our own answer. Now, twenty years after the toppling of communism and removal of the Soviets, we finally have a granite foundation for the future.”

Five years ago Orbán spoke of the new constitution as he did of the “ballot box revolution” of 2010 — something so important it would define Hungary for decades. The government then embarked on organizing all kinds of symbolic events to strengthen Orbán’s assertion. They ordered that every town hall in Hungary would have a “constitution table”. Paintings were commissioned to celebrate the new constitution.

But despite Orbán’s statement that the constitution was as firm as granite, the document has had a troubled existence. No one really knew who had been the document’s author. Thousands protested on the day when it came into force. Then, over the coming years, the document was rewritten and even criticized by the European Commission. Alas, such have been the past five years of the Fundamental Law.

No one knew who its author was

“There will be a new constitution. A parliamentary power with two-thirds support simply cannot allow for the constitution of 1949 to remain in place,” Orbán said days after his party won the 2010 national election. What made his statement so interesting is that he never mentioned the idea of writing a new constitution before winning the election. To be fair, it is also true that he never said they would not write a new one either.

Following their electoral success, the governing party undertook the task of deciding what the new constitution would be. For a long time no one knew who would be writing it. It soon became clear that the ruling party could not count on the support of opposition parties. The Hungarian Socialist Party (MSZP) would have required the constitution to pass with four-fifths support in parliament. Politics Can Be Different (LMP) called for a referendum. Jobbik, while expressing their willingness to take part in consultations over the new constitution, also signaled they would not support it. But Fidesz-KDNP did not budge.

First, the government established a so-called “constitution working group”. This was comprised of members such as the pre-fall of communism government minister Imre Pozsgay and former MDF prime minister Péter Boross. Their job was to help Orbán develop the concept of a new constitution. Later, these recommendations were not taken into consideration. Instead, consultations moved forward with former President Pál Schmitt and, later, a special parliamentary committee was created and led by KDNP’s László Salamon. The final wording of the constitution was completed by a small group comprised of Fidesz politicians József Szájer, Gergely Gulyás and Salamon. Szájer bragged that it would be the first constitution to be written on an iPad.

The new constitution was adopted on April 2011. Ruling party politicians said it was important to abandon the 1949 constitution and create a completely new one that proclaimed a national creed. Opposition parties and civil society were opposed to the new constitution because, from their perspective, the government did not provide adequate arguments to justify its necessity.

What’s more, the new constitution was essentially a one-party constitution. Thousands protested in front of the Budapest Opera on the day that it came into force. Meanwhile, inside the building, members of the ruling party were celebrating the occasion.

It was rewritten three times in the first year

“This is indeed a foundation that we can build on,” Orbán told Index back on the same week that the constitution was rewritten only months after it came into force. It was rewritten because Hungary’s ombudsman for fundamental rights challenged certain transitional provisions of the Fundamental Law for not even being transitional, which, therefore, violated the rule of law. The constitution was also rewritten to allow for more control over the courts and to allow the government to levy taxes in the event that the European courts fined Hungary.

The constitution was next rewritten to delete the part that, as a consequence, would later allow for the then still operational State Regulator of Financial Services to merge with the National Bank of Hungary (MNB). Had the constitution not been changed to allow for this, the European Commission would have launched an infringement proceeding against the Hungarian government for violating the independence of Hungary’s central bank. Just before the final vote on those changes, another addition was added to the constitution which allowed for Pál Schmitt (who resigned as President in disgrace) to continue receiving his presidential salary.

Six months later another change was proposed. The idea behind it was to restrict voting only to those citizens who had registered to vote months before the elections. This change never came into force because the Constitutional Court struck it down.

By the end of the year, another modification had made its way into the constitution, this time turning Hungary’s land laws into cardinal laws (which require a two-thirds supermajority in parliament to change). József Ángyán, a Fidesz politician and agriculture expert, did not vote for the law and later resigned from the party and his government post.

The EU voiced concern when the fourth modification took place

None of the three earlier modifications to the constitution generated the kind of backlash that was seen when the fourth modification was introduced in the beginning of 2013. One part of these changes helped ensure that transitional provisions introduced half a year earlier would become set in law — despite being struck down by the Constitutional Court.

Some of these laws included:

This fourth modification was so controversial that it generated backlash from the international community. The president of the European Council expressed alarm, and József Szájer and Gergely Gulyás had to visit Washington for damage control. President of the European Commission José Manuel Barroso wrote to Orbán to explain why the Commission would launch infringement proceedings against Hungary.

What’s more, the fourth modification had such a direct effect on certain social groups (the homeless, for example) that thousands took to the streets to protest in March 2013.

The government was spooked enough by the European Commission’s threat of infringement proceedings that it decided to modify the constitution again and remove the most controversial parts of the previous modification.

It isn’t that easy to modify the constitution now

The government has not modified the constitution since the fifth modification two years ago — until now. Currently, the government is proposing a sixth modification because of the recent terror attacks in Europe. The government would like to grant itself new powers to help manage Hungary’s perceived risk of terrorism.

Fidesz-KDNP has lost its two-thirds supermajority in the National Assembly since the last time it modified the constitution. This means that Fidesz-KDNP cannot make modifications unilaterally, and opposition parties are not willing to support the modification that would grant the government new powers if it declares a heightened state of emergency due to terrorism.