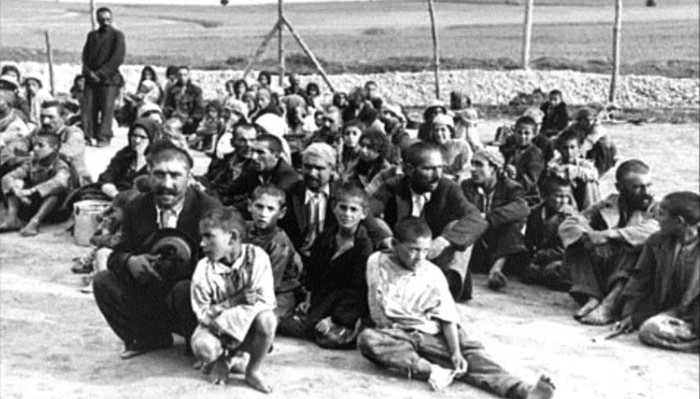 Roma Holocaust: Hungarian Roma awaiting deportation in the autumn of 1944

Seventy years ago, on 2 August 1944, over 3,000 Roma prisoners at the “Gypsy camp” at Auschwitz-Birkenau were murdered.  Out of a pre-war population of 200,000, 50-60,000 Roma living in Hungary suffered persecution during the Second World War under Miklós Horthy and Ferenc Szalási.  An estimated 10-12,000 were murdered in 1944-5, the vast majority at the hands of the Arrow Cross and the German SS.

Besides official state commemorations, “We Belong Here! – Roma Community Network” (Ide Tartozunk – Roma Közösségi Hálózat) will hold its own commemoration at the memorial for the victims of the Roma Holocaust.

According to Roma Holocaust or “Samudaripen” historians János Bársony and Agnes Dároczi, following the German invasion of 19 March 1944

. . . for a long time, Anti-Roma measures were issued by Miklós Horthy’s authorities.  In the name of the war effort, Hungarian authorities detained the Roma population of significantly three areas in collection camps in eastern Hungary, from where the men were dragged off to military-run forced-labor camps and put to work on the fortifications called the Arpád Line, which was created to guard the passes of the Carpathian Mountains.  Women and older men were put to work in the fields.  Roma men detained in collection camps in the Transdanubian region were also used at fortification construction sites.  Military authorities set up separate forced-labor units, called labor companies, for the Roma, who, guarded by a special contingent of armed soldiers, were forced to carry out such dangerous work as sweeping mines or constructing fortifications under enemy fire.  It was in these camps that the military gendarmes were to commit the first mass murders.

After the botched attempt by the Horthy regime to renounce its alliance with the Germans on October 15, 1944 and the assumption of power by the Arrow Cross Party, whose members were willing lackeys of the Nazis, raids rounding up Roma began almost immediately and so did administrative measures aimed at transferring the Roma to concentration camps in the Third Reich.  At a number of locations Roma were massacred in or near their places of residence.

The center of Roma genocide and collection for transportation to Germany was the fortress of Csillageröd, run by the Gestapo and the Arrow Cross.  From the courtyard of the fortress, trains were dispatched on Saturdays to Dachau, Mauthausan, Natzeveiler, Ravensbruck, Bergen-Belsen and Buchenwald.

The ad hoc nature of these atrocities and the itinerant habits of the Roma mean there are only rough estimates of how many Roma people fell victim to the Nazis and their collaborators. 10-20% of Europe’s two million Roma are believed to have died in racially-motivated killings in Europe during the Second World War, a fact largely unacknowledged until the 1990s.

Pharrajimos: The Fate of the Roma During the Holocaust, Barsony, Janos and Daroczi, Agnes, eds.  Romedia Foundation, 2008