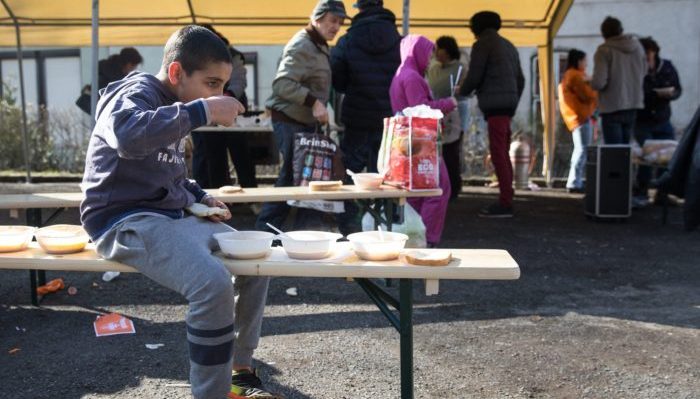 “Not a single food package has been distributed to date.”

Two years after the European Commission approved a HUF 30 billion program to provide food and clothing to Hungary’s poorest families and some 4,000 homeless people, the government has yet to complete the process of soliciting, reviewing and approving proposals, according to conservative daily Magyar Nemzet.

When announcing the EU funded program in December 2014, undersecretary Bence Rétvári said he hoped the program could be rolled out in January 2015 so that “children living in dire poverty but not attending nursery school would have access to necessary food, vitamins, and personal hygiene products.”  Rétvári’s optimism notwithstanding, it took 11 months for the Operative Program to Assist Deprived People (Rsztop) to be formally written and approved, according to which funds to underwrite feeding programs were to be made available by the end of 2015 and additional funds for helping the homeless available at the end of March 2016.

This did not come to pass, as calls for proposals were continually modified and deadlines for submission continually extended. Magyar Nemzet writes that the tender criteria were modified most recently only on December 30, and the deadline for submitting proposals extended to January 16, 2017. In other words, two years after approving the program, the government has yet to complete the process of soliciting and approving proposals.

According to Magyar Hirlap, the first call for proposals contained a serious mistake that would have caused women expecting their first child to be excluded from the feeding program, even though originally this was one of the priority target groups. The same tender stipulated that only those pregnant women could receive food aid who were entitled to receive the so-called home maintenance support. The problem is that the government did away with this program on March 1, 2015, to the enormous detriment of Hungary’s poor.

“The operative program’s program could only be modified exclusively as the result of serious discussions with the European Commission which took a long time, and for this reason children living in dire poverty did not come so much as a step closer to receiving their food packages,” writes the pro-government daily, which goes on to explain that the tender was subsequently modified and the conditions revised so that expectant mothers had to live in households in which somebody of work age participated in some sort of assistance program, but that the requirements were continuously modified.

“Not a single food package has been distributed to date”

“Over the course of last year our paper frequently inquired of the Ministry for Human Resources led by Zoltán Balog about the status of the program, but we did not receive an answer.  Finally at the end of last year we filed a public information request in order to learn the fate of the food project so vitally important to children living in dire poverty. Recently, we finally received an answer in which the ministry acknowledges that not a single food package has been distributed to date, and that it is certain that none will be distributed during the winter months, without making any attempt to explain the more than two-year delay,” writes the daily online.

According to Péter Garai, deputy undersecretary responsible for EU developments, the first phase of the program will be rolled out in three of Hungary’s poorest counties – Borsod-Abaúj-Zemplén, Hajdú-Bihar and Szabolcs-Szatmár-Bereg, where 10,000 children and expectant mothers living in deep poverty are to receive HUF 1 billion worth of food packages. According to Garai the public tendering process is under way, and the distribution of food will begin in the spring of 2017. He says the first phase will primarily benefit deprived families living in those counties with expectant mothers and those raising children under the age of 3 who are not enrolled in child care.  Garai further volunteered that proposals to assist households raising children between the ages of 3 and 18 or single-parent households located in the most disadvantaged regions also stood a chance of being approved.

According to the deputy undersecretary, the program is to be expanded countrywide in the future (without specifying when) at which time some HUF 29 billion will be spent assisting 200,000 children and adults.

Based on its reading of the tender, Magyar Nemzet concludes that the “200,000” Garai mentions is really only 170,000, of which 120,000 will be disadvantaged children or expectant mothers, and 50,000 are “socially deprived, people whose capacity for work has changed or have low income on account of their age” earning no more than 130 percent of the minimum state pension (HUF 37,050) monthly. (This may include partly disabled individuals stripped of their early retirement benefits in 2011-ed.)

According to the tender, 170,000 people should receive food by the end of 2017. Thereafter the program is to continue through the end of December 2023. Beyond food packages, only 20,000 families with children will be entitled to receive “basic consumer products” such as diapers and baby clothes in the case of infants and school materials, personal hygiene products, and even firewood for children over the age of 1.

The feeding program has a specialized element for the homeless as well. Around HUF 4 billion is allocated for assistance to those living in public areas. According to the plan, 4,000 homeless people are to be provided with either one hot meal a day or a food package.