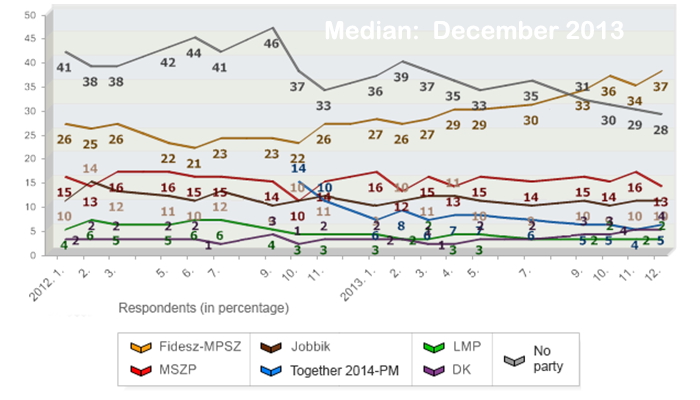 Just half a year before parliamentary elections it is as though, apart from Jobbik. the political opposition is deliberately trying to fail.  According to a public opinion poll taken at the beginning of December, the Hungarian Socialist Party (MSZP), Democratic Coalition (DK), and Together 2014-Discussion for Hungary (Together 2014-PM) alliance stand to gain just 33 per cent of the vote, well behind Fidesz-KDNP (48 per cent).  This despite the fact that 48 per cent of voters would like to see a change in government, and 58 per cent believe the country is going in the wrong direction.  29 per cent of those likely to vote in next year’s election have no preferred party.

In less than a year Together-PM managed to lose half of its supporters and has been consistently polling well under the 10% threshold the two-party alliance must clear in order to get into parliament.   Faced with the defection of half its MPs and all three of its Budapest assemblymen, LMP, too, is polling in numbers well below the 5 per cent threshold.  However, LMP’s ranks may be bolstered by the supporters of anti-corruption campaigners Jozsef Angyan and Akos Hadhazy, both former Fidesz MPs, and well as supporters of NAV whistleblower Andras Horvath.

The agreement concluded in October between MSZP and Together-PM after months of on-again, off-again negotiations is a decidedly weak one.  There is to be no joint list of candidates and no joint nominee for prime minister.   Hvg believes this “non-aggression pact” may be overwritten in the near future if Ferenc Gyurcsany’s Democratic Coalition continues to strengthen.

Furthermore, the political competence of the MSZP-Together-PM alliance has been called into question.  An administrative error on the part of PM prevented a joint opposition candidate from running in a recent by-election in the south-east City of Bekescsaba.  And the honesty and integrity of MSZP chairman Attila Mesterhazy was called into question by the Baja video scandal.

Editor: According to the most recent median survey below Fidesz and Jobbik are gaining ground.   Were elections held tomorrow Fidesz-KDNP would remain in power although it would no longer command a super-majority.  However, Fidesz could conceivable modify existing cardinal laws or pass new ones with the cooperation of radical right wing party Jobbik. 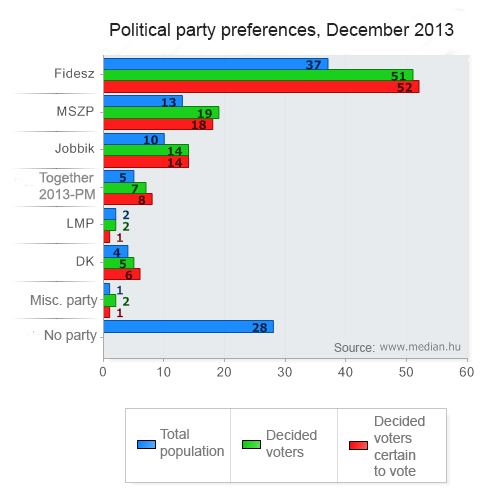