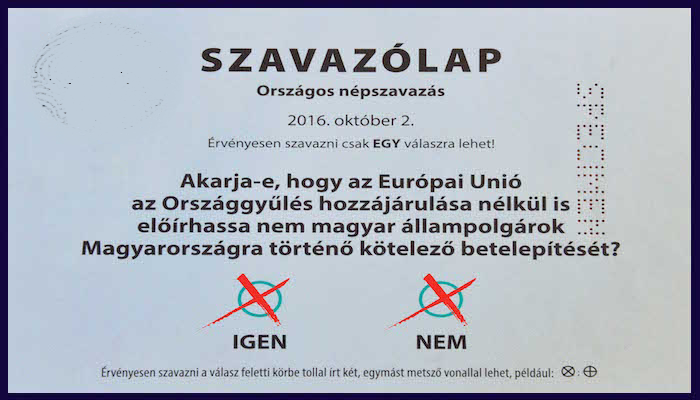 “The government’s current abuse of the institution of referendum is not just another abuse, but an act that is incompatible with the concept of human rights” – Hungarian Civil Liberties Union (TASZ)

The Hungarian Civil Liberties Union is the latest Hungarian NGO to condemn the government of Hungary for spending billions of forints on a national campaign inciting hatred of refugees and asylum seekers originating from the Middle East, central Asia and Africa.   The NGO believes the referendum itself and the method in which it is being held to be unlawful, and that it makes a mockery of the institution of public referendum.

“The October 2nd referendum is inhuman and misleading,” TASZ says. “For this reason we recommend that the citizens send a message to the government by casting an invalid vote.  The anti-refugee referendum and the government’s hate-inciting campaign, moreover deceitful because the unlawful referendum is in reality unsuitable for realizing the will of the people.  The government’s current abuse of the institution of referendum is not just another abuse, but an act that is incompatible with the concept of human rights.”

TASZ believes that the referendum “is part of the campaign that began one and a half years ago as a part of state public policy inciting hatred against refugees in an effort to eliminate solidarity with the vulnerable refugees. . . . Instead of informing people, the goal of the campaign is to eliminate the possibility of free citizens making rational, fact-based decisions.   In place of mature, informed, responsible citizens, they want to create creatures who decide about public matters and the fate of others based on the worst instincts. . . . Finally, the referendum and accompanying campaign deny the humanity of refugees.”

TASZ believes the world needs to find “a solution to the reason unprecedented numbers of people are leaving their homes, but that these solutions can only partially be based on taking in refugees.  There is a need to address the underlying causes and conditions, including war, meteorological disasters and dire poverty.

“Such answers can only come about if resources are not used to incite hatred, and if these solutions are based on human rights, on our legal system, and the values defining our culture.

“The indoctrination of collective guilt and incitement of hatred expressly obstructs effective crime prevention: government policies create a warm bed for terrorist attacks.  Moreover, the consistent prosecution of crimes protects precisely the constitutive value system of which human equality is a part.  Such value systems are incompatible with our condemning criminals based on their origin, as is our acting on the principle of collective guilt as radiated by the billboards.  In short, no such solution to the refugee crisis exists that does not start with providing assistance.”

TASZ also raises a number of legal objections to the referendum, including the fact that the meaning of the term “obligatory settlement” is unclear to lawmakers and citizens alike, and that, by law, referendums cannot be held with regard to obligations arising from international treaties.

The NGO believes the government could not have organized a referendum on this question in a democratic rule of law state whose institutions functioned properly and independently.

“A similar situation exists as though we had to choose from a slate of illegal candidates.”

A national referendum is only lawful if the question is unequivocal both to citizens and to lawmakers.  Referendums failing to meet this constitutional requirement are completely pointless and unsuitable for ensuring the people’s direct right to exercise power.

The NGO claims that the main problem is with the expression “obligatory settlement”, which it claims is not an officially recognized term.

“Since voters cannot know unequivocally what they are deciding on in the voting both, they are incapable of expressing their will with their vote and are unable to make an informed decision in favor of either option.”

The NGO says the referendum question is not clear to lawmakers either and that they cannot know what course of action is required of them based on the outcome of the referendum.   TASZ says that in the event of a valid referendum, the lawmakers can interpret the outcome however they please to make changes to laws regulating refugee and immigration policy.

Another reason TASZ believes the referendum to be unlawful is the fact that, by law, referendums may only be held on issues falling under the jurisdiction of parliament.   “This is not the case with the current question,” writes the NGO.

Regardless of how the people decide, the parliament has not authority to act, as Hungary’s obligation arises from international treaty.

The NGO points out that the burden-sharing decision taken by the European Council cannot constitute a limit on Hungary’s sovereignty as the Hungarian people previously voted in favor their country joining the European Union, and all the benefits and obligations arising from it.   In certain questions, including refugee policy, Hungary is required to reach a joint decision with other EU member states.  Furthermore, Hungary is represented in the EU not by parliament but by Hungary’s government.  TASZ points out that parliament cannot ties the hands of the government with regard to the EU.

“We as citizens have no possibility to decide on the given question through a national referendum.  This referendum—and the government that initiated it—makes a parody of the power of Hungary’s sovereign people.”

The civil rights NGO calls on Hungarians to exercise their democratic rights by casting an invalid vote, if only to minimize the chance of election officials falsifying the election result.

“In such a referendum we can only remain faithful to human dignity, equality and our mission built on an active citizenry if we actively declare our opinion, and induce others to do the same.  For this reason we ask the citizens to cast an invalid vote.”