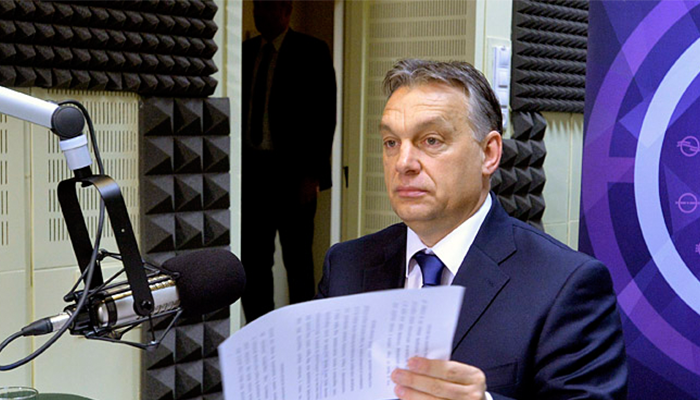 Hungarian Prime Minister Viktor Orbán acknowledged on Wednesday that he himself ordered ministries to withdraw their money from brokerage firms.  If the decision was based on inside information then the Prime Minister acknowledged committing a serious economic crime.

“I ordered it when we saw that Buda-Cash had collapsed and I was informed that it could result in a domino effect, and we saw that some local governments’ money was lost, then I ordered every ministry to examine whether there is any connection with a brokerage company and whether any public monies were stationed there, and if so, then immediately withdraw them.  At times like this not so much as a forint worth of public money should be kept at a brokerage firm,” said the Prime Minister in Sopron on Wednesday.

This strongly contradicts the statement issued on Tuesday by the Ministry for Foreign Affairs and Trade, according to which the ministry’s Hungarian National Trading House (MNKH)–having witnessed the collapse of Buda-Cash Brokerház Zrt. and Hungária Értékpapír Zrt.–decided on Thursday to withdraw its capital from Quaestor Financial Hrurira Ltd.   This took place on Monday, March 9, when the company collapsed.

Within Fidesz it was known at least two or three days before the March 5 collapse of Hungária and six or seven days before Quaestor declared bankruptcy, that the two companies could be next.  A member of the Fidesz caucus informed daily news portal Index.hu on March 4 that within the party there was talk about the broker scandal continuing.  The politician even named three financial service companies, including Hungária and Quaestor.  In this way information could have been passed to the members of the Fidesz caucus and Fidesz government officials as well.

State money cannot be invested in this manner

Since the collapse of the Lupis Broker House in 1994 the law governing government expenditures strictly regulates the investments of state budgetary organs, which may only keep securities at the Hungarian State Treasury and which are not allowed to own any securities other than treasury bills and bonds issued by the state.  However, the regulation does not apply to companies under state control, and for this reason the ministry’s company may have acted lawfully when deciding to undertake a riskier investment.

Former undersecretary at the Ministry of Finance and member of the central bank supervisory committee Tamás Katona (Hungarian Socialist Party, MSZP) told Klub Radio this applies to companies and organizations in which the state has majority interest as well.  He believes it is inconceivable that the ministry-owned company could have placed tens of billions of forints of bonds without Minister Peter Szijjártó’s permission.

Lajos Bokros, chairman of the Movement for a Modern Hungary (MOMA) and former finance minister, told the Beacon:

“In the event the Hungarian National Trading House is a state company, then it does not belong to the circle of state appropriations.  From this it follows that it is not a part of the treasury system either.  As such it can own securities, which–if the same strict rules apply to it as a hospital or a university–it can keep state paper.”

The Foreign Ministry responded to Katona’s statement Thursday morning, writing that “The Ministry for Foreign Affairs and Trade (KKM) and its constituent institutions did not place bonds with Quaestor, let alone in the tens of billions of forints.  MNKH had one security account at the company, and according to the contract the money could only be invested in state paper. ”  The company owned by the ministry “kept the taxpayers’ money in the most secure form possible, and did not initiate risky transactions.”

In response to this, the Ministry for Foreign Affairs and Trade claimed that neither the ministry nor subordinate institutions possessed unlawful information.

MSZP chairman József Tobiás invited the heads of the opposition parties to a meeting Thursday afternoon, claiming that “a situation has emerged in which the Orbán government has lost its legitimacy requiring that the opposition powers coordinate their activities.”  Tóbiás believes the head of government is personally responsible for the private savings lost as a result of the collapse of the brokerage companies.

Prior to that the Socialist party said Orbán was responsible for the death of those who took their own lives after the collapse of Quaestor.  The head of the main investment office at the ministry took his own life on March 10, despite being named Hungary’s next ambassador to Ecuador.

The Hungarian Liberal Party (MLP) has issued a statement according to which “clearly the Prime Minister knew that state money was on deposit at Quaestor”, and that KKM “was playing the market with state assets” since only in this knowledge could he have ordered the withdrawal of the money.

Politics Can Be Different (LMP) also suspects that the ministry was acting on insider information.  Timea Szabó, co-chair of Dialogue for Hungary, stated that her party will report the ministry to authorities.   Radical right-wing Jobbik and the Democratic Coalition (DK) have announced their intention to do the same.  The latter believes the head of government to be personally liable for damage caused by Quaestor’s collapse.

Together co-chairman Levente Pápa says that in the “criminal gang” Quaestor owner and former CEO Csaba Tarsoly is the thief, National Bank governor György Matolcsy is the charlatan, Chief Prosecutor Péter Polt is the accomplice, Péter Szijjártó is the liar and Viktor Orbán is the gang leader. Pápa has called for the resignation of all five.

One of the most serious crimes of capital markets

Insider trading is one of the most serious capital market crimes.  According to law CXI section 144 (1996) the use of inside information is strictly forbidden when engaging in the trade of securities or authorizing a third party to do so on one’s behalf.  Inside information is information that has not been made public but which, if made public, would have a significant effect on the value of the security in question.  Judging from Orbán’s statement, it appears as though this is precisely what happened.  The criminal code prescribes a prison sentence of up to three years.

Who is to hold the responsible parties to account?