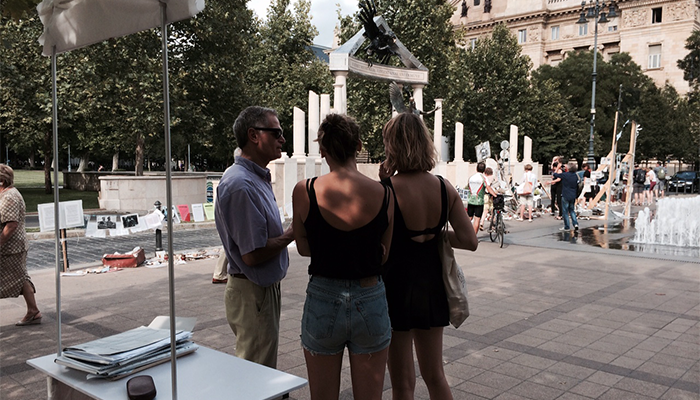 “The memorial itself is just a symptom of stupidity, vulgarity and the denial of reasonable thinking. This is the attitude we are protesting against.” – Living Memorial tour guide

The very same day the government began the construction of its controversial memorial to the victims of the German invasion of 1944, another was born across the street from it. This monument is not made of bronze and stone but of the presence, thoughts and conversations of the citizens who now gather on Szabadság Square every evening. They call themselves the “Living Memorial”.

They plan to stay on the square until the government’s memorial is demolished. Until then they content themselves with smaller achievements, such as persuading a young man to leave an extreme right-wing youth organization. The Budapest Beacon spoke with one of the activists on the square, a teacher of English and History, who asked not to be named. He has spent almost every evening on the square since April 8, the date construction of the monument started despite Prime Minister Viktor Orbán promising before the April 6 general election to resume talks with Jewish groups over the controversial memorial “after Easter”. 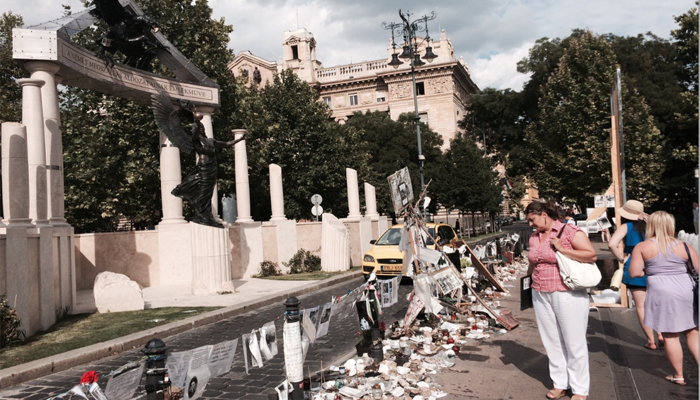 Why are you at Szabadság Square every evening? What is your task here?

I consider myself a voluntary tour guide. Lots of people are walking around here and many of them don’t understand what is going on with this memorial. I talk to 20-30 people each day. I give them a little piece of paper with some information about the memorial, and if they wish, they can ask me anything. I’m here until 10-11 pm every evening and I’m very happy to converse with anyone.

What is your problem with the memorial?

We could mention its aesthetic flaws but its meaning is more frightening.  It falsifies Hungary’s history during the Horthy era and in 1944. It is very sad that even though 2014 is the Holocaust’s 70th anniversary, the government has not held a single commemoration or event that affected organizations have not opposed. However the biggest problem with the memorial is that the government promised to consult everyone affected by it after the parliamentary election. That consultation never took place. Instead they erected the memorial under the cover of darkness. 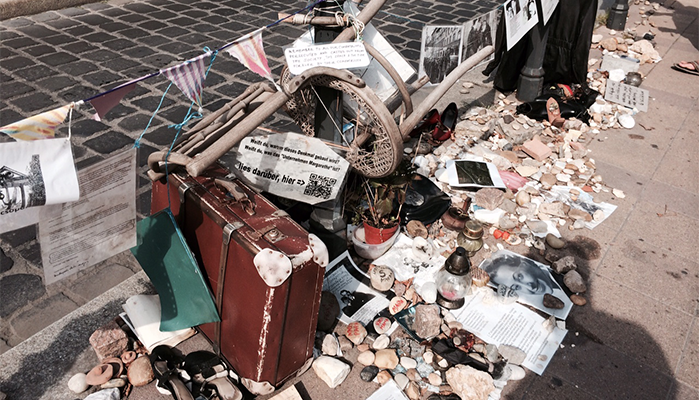 How did you start protesting?

When they started to build the memorial we realized we could not fight the creation of a dead statue made of stone and bronze. But we can create our own living memorial. People brought stones, candles, photos and personal belongings that express their feelings, and placed them in front of the cordon. We thought that the police would clean away our Living Memorial when the construction of the government’s memorial was finished. Surprisingly, they left it here. In the meantime, we took two white chairs, placed them face to face, and invited passers-by to sit down and talk, have a conversation about anything that they are interested in or even a debate, which the government is not brave enough to do. It turned out that too many people wanted to talk and we needed more chairs. Now we have a group conversation of 30-40 people every evening, with proper moderation and microphones.

Who joins these meetings?

The audience is constantly changing.  There are some familiar faces returning from time to time. Sometimes we invite “celebrities”. On Monday we had a discussion with Zoltán Kiszelly, a political analyst. Later this week we will have the philosopher Gáspár Miklós Tamás. We raise discussion topics at the beginning of the meeting but generally divert from them quite quickly. We also encourage anyone who passes by and seems to be interested to sit down and join us. 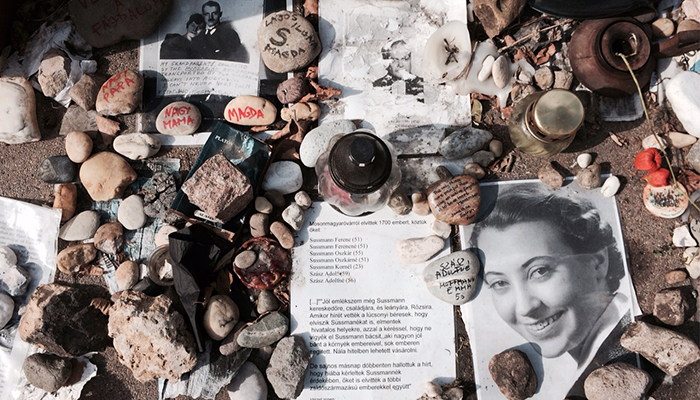 Who was the most interesting person to join the conversation?

Once a young boy sat among us wearing a T-shirt of the Hatvannégy Vármegye Mozgalom (64 Counties Movement, an irredentist, radical right-wing youth organization) and introduced himself as a member of (radical right-wing) Jobbik’s Youth Organization. He wanted to hear our opinion about the Gypsies. Lots of the members of our group wanted to chase this guy away but some of us defended him. We thought that he also had the right to express his opinion, and it was already a good sign that he was willing to introduce himself and start a conversation. After our meeting he gave us his email address. He returned the next evening as well and once more that week. Then he didn’t show up for a week. But the next time he came, he announced that, because of all he had heard here, he had decided to quit his organization. This is a huge thing. Small achievements do count in the long run.

Everyone who does not agree with you is so peaceful?

Not at all. Last Friday a neo-Nazi couple came to the memorial and began to shout at us, calling us Gypsies and Jews, spitting on our personal memorial. When a woman from our group started to take photos of them, the neo-Nazi woman broke her HUF 40,000 camera. I told the people standing next to me, “Here are the Nazis again, destroying our peaceful demonstration”. Then a young girl turned to me and said, “Don’t call my mum and dad Nazis!” I was shocked to discover that this was a family, that for them this outrageous behavior was a normal Friday night family outing. But I began to speak with the girl and she turned out to be quite intelligent, and at least had the courage to admit that if her father came to me and beat me up, she would take my side and not his.

Did they hurt you physically?

They were only pushing us but I could feel that they would do more if it wasn’t for the police officers standing a few meters away, watching us. 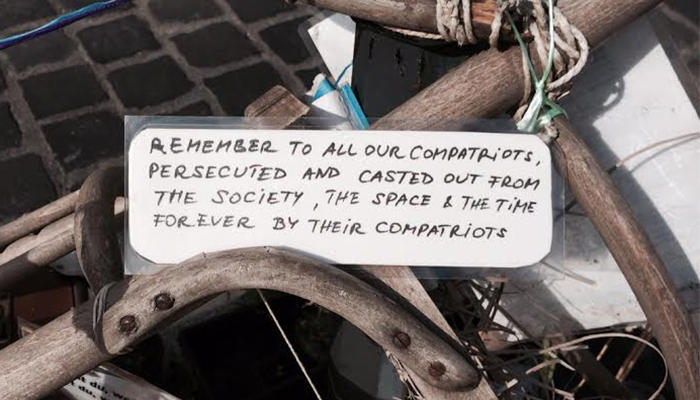 The government spent more than HUF 88 million on police officers securing the memorial. How many police are here and what are they doing?

You have been coming here every evening for more than 100 days. What is your aim and how long are you planning to stay?

Until they move the memorial away.

Which one, your Living Memorial or the bronze one?

Moving the Living Memorial would be a desecration of the victims, so I think the government would not dare to do it. We would like the bronze one to be moved – this is what the opposition candidate promised to do if he wins the local elections in the district.

He does not have much of a chance of winning though, does he?

Well, we don’t know. It might also be enough if we only wait with patience because the memorial might just collapse anyway – it was built over the entrance to an underground garage. I don’t think it is very secure. On the other hand, I think that the memorial itself is just a symptom of stupidity, vulgarity and the denial of reasonable thinking. This is the attitude we are protesting against. 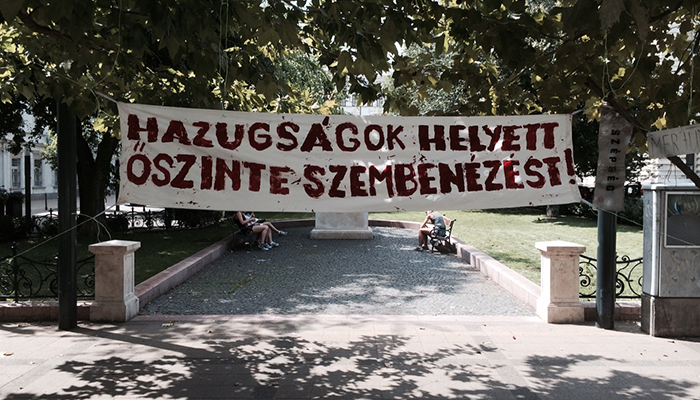 “Instead of lies, truthful recognition”