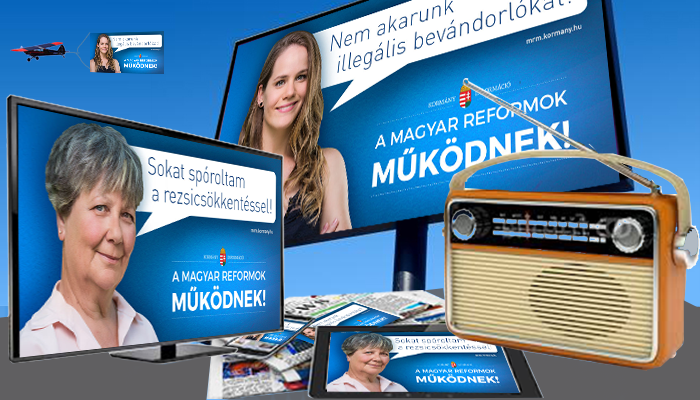 The Orbán government’s propaganda campaign for its upcoming anti-EU refugee quota referendum on October 2 shows the extent to which the line between Public Service Announcements (PSA) and political campaigning has been blurred, said Miklós Ligeti, legal director for Transparency International Hungary, on ATV’s Egyenes Beszéd.

According to Ligeti, the government’s billboard campaign for the referendum is among the most expensive methods for government communication and it happens in a completely non-transparent manner.

Blurring the lines between government communication and party politics has been a hallmark of the second and third Orbán governments. Prior to the 2014 national elections, the Hungarian government launched a campaign informing the citizenry that “Hungary is performing better!” The propaganda campaign wound up being used by Fidesz during the election season.

Regarding the billboard campaigns, Ligeti said the only law governing the use of billboards for political campaigns is a section of Hungary’s election law dealing with political advertisements in public areas. According to Ligeti, this law makes it possible for the advertisers to keep secret the amount for which the advertising space is leased.

While the government’s current use of billboards differs from the aforementioned example because Hungary is not yet officially in a campaign season, the government can utilize public funds to promote itself and the ruling party.

“No one can deny that the government is, to use nasty jargon, actually promoting itself and the ruling party right now,” Ligeti said.

According to Ligeti, this type of practice is precisely what the Organization for Security and Co-operation in Europe (OSCE) frowns upon when recommending that national legislation should restrict such practices.

“These recommendations have fallen on deaf ears in Hungary,” he said. “Transparency International has also made these recommendations for years to no avail. [The national government] simply will not introduce these changes. What we are seeing now is a campaign taking place involving billions of forints worth of advertising.”

Once election season sets in, Ligeti said, commercial Hungarian television broadcasters are allowed to choose whether or not they wish to air political campaign spots for free.

According to Ligeti, the government’s current strategy is very similar to its earlier strategy. The government will use the pre-campaign period to blanket the media environment with its political campaign. The National Election Office cannot take issue with these political campaigns because the office itself has no mandate to review anything outside the official campaign time frame.