In Hungary the wheels of justice grind very slowly indeed 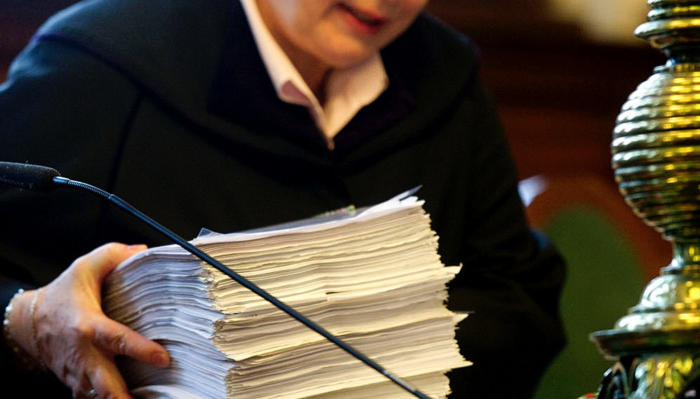 Do you still remember Miklós Hagyó? And Attila Kulcsár? Did you know that in the case of György Budaházy, the court case is still ongoing, as well as a 1999 homicide that is still on the docket at Debrecen District Court?

Last Friday the Budapest Capital Court of Appeals issued a verdict in the case of the racist serial killings against Roma. The Kiss brothers together with Zsolt Pető committed their first attack on the Roma in the summer of 2008, seven years ago. They killed six people, including a child, and seriously wounded two more  before being captured.  The case did not come to trial until 2011, resulting in a guilty sentence being handed down in 2013.  The defendants appealed.  The second level decision upholding the original verdict and sentencing, was only handed down last week, some four years after the case first came to trial.  The three sentence to life in prison intend to appeal to Hungary’s highest court, the Curia.

In the  Hungarian legal system, there is no time limit on how long a judge can deliberate on a case, nor a final deadline on verdicts. A court case usually concludes if the judiciary finds that the defendant’s guilt or innocence is beyond doubt. It takes time for first-level verdicts to be handed down, and even more for second level verdicts. In some instances the latter refers the case back to the first level court for retrial.  The following are some cases that have been pending for years and even decades.

The story of the Burka family started in March 1999, when one morning János Gy., a regular guest of the local pub has been found in a pool of blood in his courtyard. The police suspected Burka and his son of committing a homicide. In 2002 they were arrested and imprisoned. The court of appeals however was not content with the first-level verdict and ordered a new procedure. In 2006, the Burkas were legally acquitted for lack of incriminating evidence.

Following that, the father and son sued the Hungarian state and won.  The court awarded them total compensation for the years spent in prison in the amount of HUF 45 million. For a long time, that was the largest compensation that Hungary paid out to anyone (the record was only topped last year: a victim of an organized crime group, the “Black Army,” Attila Szántai received HUF 100 million).

However, in 2012 the attorney general ordered a second investigation in the case after an antenna taken from the victim was found in the vicinity of the Burka family’s garden. The court reinitiated a criminal case. So far there were 14 court days during which the testimony of 10 witnesses were taken, and so far the date of a possible verdict cannot be forecasted. The Burkas however are facing potential trouble if they get sentenced, as they have already spent the millions in compensation, and presently are employed as public workers.

The former Socialist deputy mayor of Budapest is accused of organizing an organized crime ring that embezzled HUF 1.5 billion from the Budapest Transportation company in under a year. Former transport company CEO Zsolt Balogh originally testified that he gave Hagyó HUF 15 million in a Nokia phone-box.  He has since retracted his testimony.

Delay in the Hagyó court case was the result of politics as well.  Arrested in 2010 the same day his immunity from prosecution expired, his case came to trial shortly after various changed has been made to the judiciary by the second Orbán government giving a newly formed formed judicial oversight office the right to assign cases to other jurisdictions. Consequently this case was tried at the Kecskemét Regional Court instead of the Budapest Regional Court that had the regional jurisdiction. A year later, however, the Constitutional Court ruled that relocation of court cases violates the Fundamental Law. A long meddling between the Kecskemét and Budapest courts started, during which time they exceeded one of the few judicial deadlines specified by law: in cases of special importance, such as Hagyó’s, a hearing should be held at least every three months, otherwise the case would start over.

Consequently, the whole procedure was relaunched last July, and presently it is at the phase of witness testimonies and documentation inquiries.  The Budapest court does not know when a verdict will be issued.

In the meantime, the Strasbourg international court awarded Hagyó EUR 12,500 in compensation for allegedly being detained for a year in inhuman conditions by Hungarian authorities (such compensation cases are more and more frequent due to the squalor in prison facilities).

Budaházy and his companions are accused of committing an act of terrorism. According to the indictment, they founded a group having as its objective intimidating members of parliament.  They are accused of attacks on regional party offices of the Socialist and Free Democrat parties involving Molotov Cocktails, and of physically assaulting Hír TV anchor Sándor Csintalan, a former Socialist MP, and present Fidesz supporter.

The court case started in 2011.  After 120 days in court, there is still no verdict in sight even if Budaházy’s legal representative was expecting a verdict by the end of last year

“The ongoing case against György B. and his associates is extremely complicated both in legal terms, and in terms of the demonstration of evidence,” writes the Budapest Regional Court. The indictment is 36-pages long and contains nine major points and numerous minor ones. So far the testimonies of 56 witnesses and 27 experts have been taken. DNA tests have been conducted, and ballistic, military, chemical and even military expert reports have been ordered.   The case was furthered delayed by the fact that one of the accused was arrested in the meantime by foreign authorities, and therefore could not be present at the Hungarian court.

A home arrest order against Budaházy expired last year, and the alleged criminal has been free to move around ever since.

Accused: Former police chiefs László Bene and Péter Gergényi, together with 12 others

A procedure started against the former police chiefs for failing to follow proper procedure in connection with their behavior during the riots of autumn 2006. According to the indictment, police reaction to the siege of the state television headquarters was poor, the commander on the field was unfit for the duty, the police lacked appropriate equipment, and leaders of the police were unable to act properly. In addition, no disciplinary procedures were initiated afterwards, despite the failure of a number of policemen to visibly display their identification numbers.

Unlike other cases, this one has a verdict in sight: only a few more hearings are necessary to finish collecting the witness testimony. The testimony of over 200 witnesses has already been taken, and even an on-site visit at the former TV headquarters was conducted. The Budapest Regional Court told us that they aim to reach a verdict this summer, autumn at the latest.

Do you still remember Attila Kulcsár, the protagonist of the 2003 broker scandal? His case has been ongoing ever since 2005, and he is accused of embezzlement. Seven years ago, they already concluded a court case, with Kulcsár sentenced to eight years in prison, but the second-level court later ruled that the first-level court process had been sloppy and ordered the latter to retry the case. The restarted case has been ongoing as of 2010, since when the court has faced an increasingly difficult task:

Because of all this, the court has not got the slightest idea about when the case could possibly conclude, not even talking about when a second-grade procedure could finally start. Kulcsár was been in pre-emptive custody since 2003 and there was a house arrest order effective against him. At present, however, he is completely free to move, but if eventually he is sentenced to less than 5 years he could even apply for compensation from the state, as he already spent nearly that much time in custody.