In the wake of unexplained funding cuts, Kretakor to no longer seek state grants 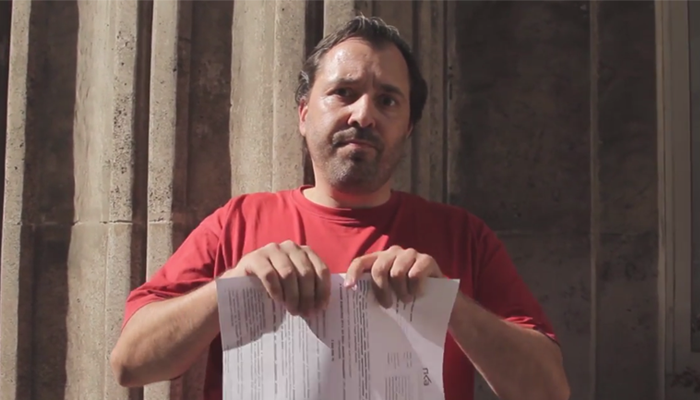 Árpád Schilling, director of Kretakar (Krétakör), a theatre company specializing in the interpretation of social problems, has announced in a simple yet dramatic manner that his NGO will never again apply for public funding.

In a video filmed in front of the Ministry of National Resources released on Friday, Schilling objected to the fact that the ministry had cut National Cultural Fund funding of his organization by ripping up an official letter informing Kretakar it had won a grant.

Fed up, Schilling announced that in the future it would not apply to the ministry for funds:

For years I’ve been saying that either out of fear or cowardice if we compromise with this system that it will eventually devour us.  Just as there is corruption surrounding nuclear power and the sale of tobacco products, so is there theatre corruption.  In 2013 Kretakor applied to the Ministry for funds.  The curratorium awarded a certain amount into which the ministry reached in and unilaterally decreased the amount by one-third.  In 2014 we again applied and again the ministry intervened, decreasing the amount by one-half.  I’ve had enough of laws that protect power from the people.  Enough, no more, I’m done.  I’m not asking any more money from the state. We will not apply again to the ministry for funds.

Kretakor is known for its strong focus on current societal matters. The NGO recently refused to cooperate with the Government Control Office in the audit of grants received by Hungarian NGOs from the Norway and EEA Civil Fund as ordered by the Office of the Prime Minister.

Recently, Kretakor managing director Márton Gulyás told ATV’s Olga Kalman his organization had used grants received from Norwegian Civil Grants to partly  fund the theatre company’s participation in protests over the firing of Origo.hu managing editor Gergő Sáling and the government crackdown on EEA and Norway Civil Grant administrator Ökotárs, claiming this fell within the scope of activities for which the NGO had applied for funding.

Schilling’s comments caused quite a stir among government and opposition MPs alike and were seized on by pro-government figures to justify the government’s crackdown on NGOs receiving funds from the Norwegian Funds.

In a recent interview given to daily online news portal vs.hu, Veritás historical research institute director Sándor Szakály even went so far as to liken a Hungarian NGO “winning money to protest” to German funding of the Bolsheviks before their coming to power in Russia.

(Editor: By the same token one might ask why the director of a government-funded historical institute would draw such an inappropriate and ahistorical parallel between the two events).