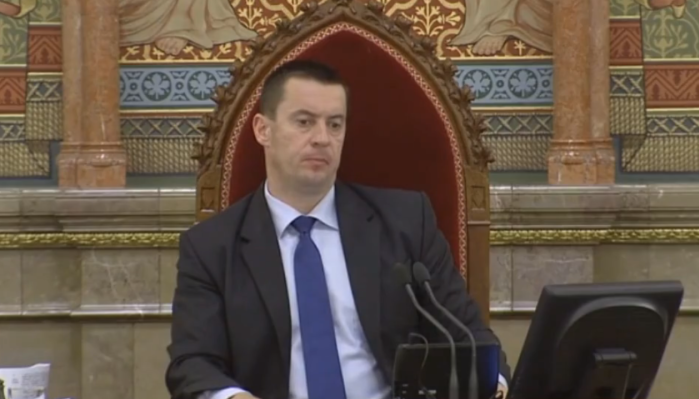 Jobbik deputy speaker of parliament Tamás (Roy) Sneider, who was once given a suspended sentence for physically assaulting a Gypsy.

Support for Hungary’s ruling Fidesz party has fallen to new lows even as that for radical right-wing Jobbik has grown, according to an Ipsos poll conducted March 6-13.

Support for Fidesz among eligible voters in February and March remained at 21 percent, while support for Jobbik grew by two percentage points from 16 to 18 percent .  During the same period, support for the Hungarian Socialist Party (MSZP) grew from 11 to 12 percent.

According to Ipsos, support for the Democratic Coalition (DK), the party founded by former Socialist prime minister Ferenc Gyurcsany, remains at 4 percent, Politics Can Be Different (LMP) is at 3 percent, and Together (Együtt) and Dialogue for Hungary (PM) at 1 percent each.

Most significantly, the percentage of undecided voters has decreased from 40 to 37 percent.

The current data suggests that out of some 8 million eligible voters, Fidesz has 1.7 million supporters, Jobbik has 1.5 million, MSZP has 1 million, DK has 300 thousand, LMP has around 250 thousand, and both PM and Together have around 100 thousand each.

Ipsos’ polling data shows that among decided voters (those indicating that they would vote for one party or another), support for Fidesz fell from 40 percent in February to a record low of 37 percent in March.

By contrast, support for Jobbik among decided voters increased from 25 to 28 percent according to the poll.

Among decided voters, support for MSZP held steady at 19 percent.  Support for DK increased from 6 percent in February to 7 percent, while LMP’s has dropped from 5 to 4 percent in the same period. Together and PM remain at 1 percent each.

444.hu attributes Jobbik’s success to its ability to retain nine-tenths of those who voted for the party in last year’s parliamentary election, in addition to expanding its base to include new supporters, among them less educated and unemployed 20- to 30-year-olds.

It is in this age group that extremist Jobbik is outperforming Fidesz to become Hungary’s largest opposition political party.