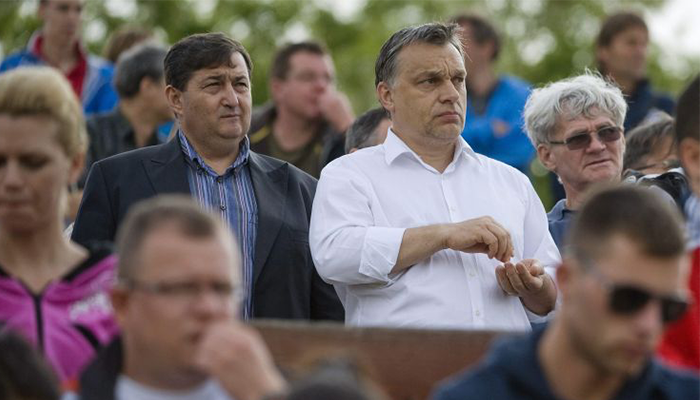 1 : a weak or imaginary argument or opponent that is set up to be easily defeated.

2 :  a person set up to serve as a cover for a usually questionable transaction.

A number of individuals with close ties to Hungarian prime minister Viktor Orban have amassed sizable fortunes under the second Orban government, winning government tenders ranging from highway construction contracts to tobacco retailing concessions. Often the transactions in question involve sizable non-refundable EU grants such as the EUR 1.9 billion awarded to a company led by Orban’s dentist in 2011.

A flurry of lucrative government contracts and concessions has enabled a gas pipe fitter from Orban’s home town of Felcsut to go from rags to riches during an economic recession that put many contractors out of business.

Amassing a personal fortune of HUF 6.9 billion (USD 32 million) Lorinc Meszaros (pictured above with Orban at a football match) is presently ranked 88th on the list of Hungary’s 150 wealthiest individuals.  His meteoric rise has raised a number of eyebrows, however, especially given the relationship of his new assets to those of Orban’s immediate family.

“Nobody in their right mind believes this humble gas pipe fitter became a business genius” Jozsef Debreczeni told ATV’s Olga Kalman recently.  “There are people near to Orban whose relationship with him is built on the strictest of confidence whose enrichment is the stuff of fairy-tales.  Here we have, for example, Lorinc Meszaros whose companies suffered serious losses in 2007.  He was the second largest winner of state-owned agricultural grounds in the country.” According to Debreczeni grounds controlled by Meszaros are adjacent or near to ones owned or otherwise controlled by Orban’s wife and father.

In his recently published book A Fideszes Rablogazdasag (“The Fidesz Economy of Theft”), Debreczeni presents compelling evidence in support of Attila Mong’s contention that “Fidesz operates as a holding company with politics and the accumulation of wealth being the two main branches.”  In Debreczeni’s opinion Lorinc Meszaros is Viktor Orban’s “straw man”.

Born into a poor family, Meszaros grew up to become a gas pipe fitter.  Known as the “village plumber” his first company connected homes to gas and water mains in Felcsut and nearby villages.  A generous supporter of the local kindergarten and school, Meszaros was repeatedly elected to the Felcsut city council as an independent.

After his defeat in 2002 Viktor Orban seized on the idea of turning his home town of Felcsut (pop. 1800) into an important center of football.  Felcsut agreed to contribute the ground and Meszaros was given the task of representing the city to the project.  Shortly thereafter he was named chairman of the Felcsut foundation for training future football players (Felcsúti Utánpótlás Neveléséért Alapítvány) despite having no particular love or affinity for the game.

As chairman of the Felcsut foundation he was responsible for funding the Ferenc Puskas Football Academy founded in 2006, which he also heads.

After nearly going bankrupt in 2007, local government contracts worth hundreds of millions of forints in 2008 enabled Meszaros to acquire Felcsut’s football club from the only other large contractor in town.

In 2010 Meszaros was elected Felcsut mayor during a by-election as the Fidesz candidate.  Since then his construction companies have flourished as part of a consortium reportedly winning HUF 3.5 billion (USD 16 million) worth of public tenders.  Companies owned and/or controlled by Meszaros are presently building a HUF 4 billion (USD 18 million) stadium in Felcsut at the behest of the Football Academy he heads, paid for with corporate donations that can be 100 per cent written off against corporate taxes thanks to an extraordinary modification to the Hungarian tax code at the end of 2011.

During this time Meszaros has diversified and expanded his business interests to include agriculture and retailing.

Last year Meszaros (who has as much experience farming as playing football) won the right to cultivate 1010 hectares of state owned ground in Fejer county, including 758 hectares in nearby Alcsutdoboz, the town of Orban’s birth, where Meszaros’ company beat out a number of local farmers to win 14 out of 17 parcels (including three parcels it hadn’t even applied for according to Blikk).

Meszaros’ wife and brother also won the right to cultivate 94 and 139 hectares of state-owned ground, respectively, making Meszaros and company the second largest winner in all of Hungary after another close associate of Viktor Orban’s. According to ATV the right to cultivate so much state-owned ground entitles Meszaros to some HUF 70 million (USD 380,000) in EU agriculture subsidies every year.

Several months before the results of the tenders were announced Meszaros’s agricultural company began improving and cultivating grounds previously rented by another company, prompting former state secretary Jozsef Angyan to resign in protest. “A person only does this if they know what grounds they are going to get and that the public tender process is merely a formality”, Angyan told Magyar Narancs.

In April of 2013 it was discovered that a company owned by Meszaros had won the exclusive right to sell tobacco products at 19 Auchan hypermarkets in Hungary.

It is hard to imagine Lorinc Meszaros (or anyone else for that matter) accomplishing all of this without the help of Viktor Orban.  But does that mean Meszaros is fronting for Viktor Orban?

That’s for Meszaros and Orban to know and Czech prosecutors to find out since Hungarian prosecutors are evidently reluctant to investigate such matters.