I call on those involved in the current billboard campaign and those responsible for it to reconsider the consequences.
No gain can come from such a campaign recalling the historic lesson.
At the moment beyond political criticism of a certain person, the campaign not only evokes sad memories but also sow (sic) hatred and fear.
It’s our moral responsibility to raise a voice and call on the relevant authorities to exert their power and put an end to this cycle.

However, Israel’s Foreign Ministry was directed by the Prime Minister’s Office under Benjamin Netanyahu the following day to revoke its statement, and issued a clarification Sunday where it criticized Soros for “continuously undermining Israel’s democratically elected governments.”

“Israel deplores any expression of anti-Semitism in any country and stands with Jewish communities everywhere in confronting this hatred,” reads the statement from Israeli Foreign Ministry spokesman Emmanuel Nahshon. “This was the sole purpose of the statement issued by Israel’s ambassador to Hungary. In no way was the statement meant to delegitimize criticism of George Soros, who continuously undermines Israel’s democratically elected governments by funding organizations that defame the Jewish state and seek to deny it the right to defend itself.”

Israel’s backtracking on Hungary’s anti-Soros campaign comes ahead of a planned July 18 visit by Israeli Prime Minister Benjamin Netanyahu, the first visit to Hungary by an Israeli head of government in 30 years. 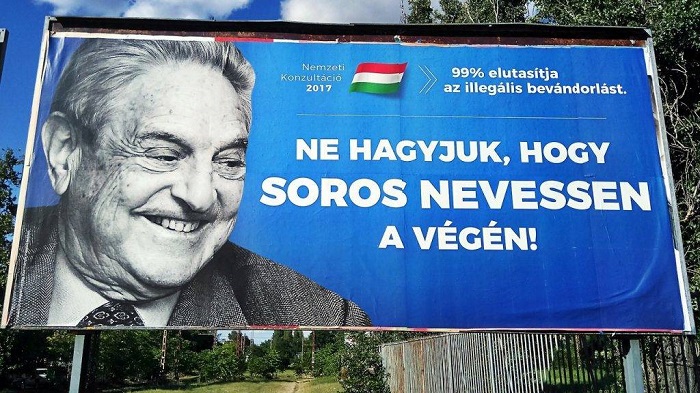 The ads, widely condemned by civil society groups and opposition parties, portray a laughing George Soros as a powerful financier hellbent on destabilizing Hungary to topple the government and import illegal immigrants. The ads have prompted foreboding comparisons both to George Orwell’s “1984”, and to the antisemitic hate propaganda produced by Nazi propaganda minister Joseph Goebbels in the years leading up to WWII. Translated, the billboards say, “Don’t let Soros have the last laugh!”

Mazsihisz, Hungary’s largest Jewish organization, also reacted to the ads, saying they aroused “bad memories” for Hungarian Jews. The organization sent a letter to Prime Minister Viktor Orbán last week asking him to immediately end the propaganda campaign and remove all ads from billboards around the country.

“This campaign is not openly antisemitic, but it is very capable of stirring up uncontrolled sentiments including antisemitism,” wrote Mazsihisz president András Heisler in the letter to Orbán. “Messages from dark periods of Hungary’s history appeared on the billboards on the streets of Budapest and other big cities, but the invisible social damage is probably more serious than that.”

Heisler said it was the “historical responsibility” of Hungary’s elected leaders not to allow the spread of hatred, and not to turn Hungarians against one another.

“These poisonous messages damage all of Hungary. Please, consider my words and do what is necessary to bring this bad dream to an end as soon as possible,” closes Heisler’s letter.

Orbán responded to the letter cynically, declaring that he would not end the campaign as it was his responsibility to protect Hungarian citizens.

“Illegal migration is clearly a national security issue,” Orbán wrote. “Those who violate the security of Hungary are subject to the political and legal power of the Hungarian state irrespective of their origins, religion or financial status. We are protecting our homeland, our families and our everyday security, our achievements and our culture.”

According to the Prime Minister, “whoever uses their property, power, influence and the NGOs they fund to settle millions of migrants into the European Union consumes our common future. The billionaire speculator George Soros has made it clear countless times that this is exactly what he wants.”

Orbán did not, however, elaborate on how erecting thousands of billboards around the country – deemed potentially antisemitic by both Hungary’s largest Jewish organization and the Israeli ambassador – contributes in any way to Hungary’s national security.