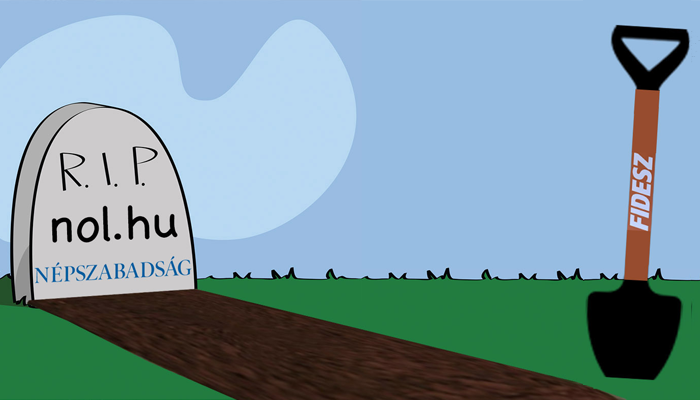 Hungary’s biggest and most important broadsheet, Népszabadság, is never again to grace the country’s news-stands.  Nor are its extensive digital archives to return to the internet, it seems, meaning that tens of thousands of articles chronicling the past two decades from a leftist point of view have literally vanished into thin air.

When acquiring Mediaworks in October, Opimus Press Zrt. declared its intention to examine whether publishing the newspaper again was an option.  Having apparently completed its examination, Opimus announced on its official website today that there was “neither rational possibility nor economic basis for restarting its publication.”

This comes as no surprise considering Opimus is run by Gábor Liszkay, owner and publisher of pro-government print daily Magyar Idők (“Hungarian Times”).

All that remains of nol.hu, the left-wing daily’s online edition, is the original announcement of October 8th informing readers that Mediaworks had deemed it necessary to suspend publication in order to focus on finding “a business model suitable to current business trends.”

As neither the second nor third Orbán governments were in the habit of advertising in the left-wing daily, the efforts failed (to nobody’s surprise).

Little of the reported HUF 17 billion (USD 60 million) spent by the government this year on “public service announcements” across all media platforms warning of the threat posed by migrants, took the form of advertisements placed in Hungary’s largest newspaper in terms of circulation.  Instead, government spending on print and online advertising was concentrated on a handful of pro-government media outlets launched in the wake of Orbán’s spectacular falling out with Lajos Simicska, the architect of Fidesz’s economic and media hinterland, by members of the prime minister’s inner circle of friends and advisors.

The sudden “suspension” of Népszabadság (“Folk Freedom”) elicited international criticism which the publisher’s previous owner, Vienna Capital Partners, attempted to justly in strictly economic terms, ignoring the fact that all print publications and most online publications depend to a large extent on government advertising, of which the left-wing daily was deprived following the return to power of the right-wing Fidesz-KDNP political alliance in 2010.

Critics point out that Hungary’s Fundamental Law stipulates that media pluralism be maintained.  Orbán clearly has no problem with this, providing the vast majority of media outlets (or their means of distribution) are owned and/or controlled by members of his inner circle, including Árpad Habony, Andy Vajna, Tamás Szemerey, who is the cousin of Central Bank Governor György Matolcsy, and media newcomers Lőrinc Mészáros and Mária Schmidt.