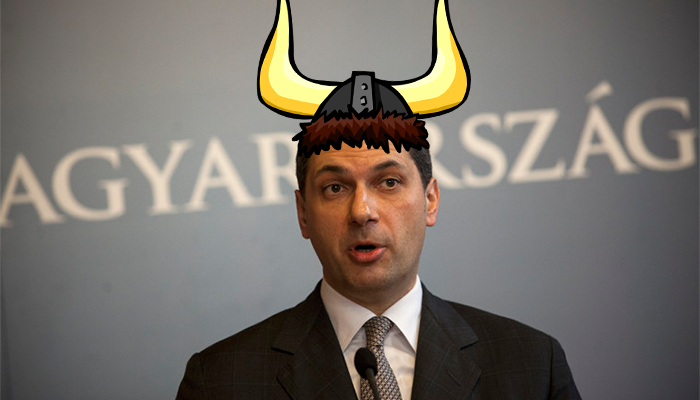 This is all about Fidesz wanting exclusive authority to decide who gets how much.

Secretary of State Janos Lazar has written a letter to the head of Norway’s Civil Fund strongly criticizing it for allegedly interfering in Hungary’s internal affairs by providing funding to organizations with close ties to liberal party Politics Can Be Different (LMP).

Deputy State Secretary Nandor Csepreghy, told pro-government on-line daily mno.hu that Janos Lazar expects the Norwegian Civil Fund to consult with the Hungarian government on future disbursements. According to Csepreghy the government of Hungary would prefer for Norway’s Civil Fund to provide financial support through Hungary’s governmental organizations whose “legitimacy comes from society and the voters”.

Csepreghy believes it is in the public interest that the use of development funds be administered and guaranteed by the Hungarian government. He says it is unacceptable that a civil organization with ties to a political party gets to distribute funds appropriated by the government of Norway for the purposes of supporting civil society.

Csepreghy also told mno.hu that public funds [from other countries] cannot be distributed among private organizations in Hungary because the public benefit of these funds is “questionable”. He says that if the Norway Civil Fund refuses to be the Hungarian government’s partner in this matter, the latter may interpret this to mean that Norway’s government is directly involved in a quasi-interference in Hungary’s internal political affairs.

What kind of projects does Norwegian Civil Fund support in Hungary?

The Norwegian Civil Fund sponsors a variety of programs in Hungary. (To read the full list of current grant recipients, click here).

The fund is administered by the Ökotárs Foundation in cooperation with Autonomia Foundation, Foundation for Development of Democratic Rights (DemNet) and the Carpathian Foundation-Hungary and targets projects in the following areas: democracy and human rights, gender and equal opportunities, community and organizational development, youth and children issues, environment and sustainable development, provision of welfare and basic service to vulnerable groups, and the empowerment of vulnerable groups. (To read more about administration of the fund and how funds are distributed, click here).

The overall objective of the Hungarian NGO Fund is “strengthened civil society development and enhanced contribution to social justice, democracy and sustainable development”. Based on the donors’ decision, the Fund places special attention on programs dealing with the human rights of minorities (including minorities on grounds of ethnic origin, religious affiliation, language use and sexual orientation), good governance and transparency, combating racism and xenophobia (including hate speech and hate crimes) combating discrimination, social exclusion, gender inequalities and gender-based violence.”

The Budapest Beacon spoke to the Ökotárs Foundation’s chief executive Veronika Mora to find out more about State Secretary Janos Lazar’s controversial letter to the official representative of the Fund’s donors, Vidar Helgesen, Norway’s Minister of EEA and EU Affairs.

Veronika Mora tells the Budapest Beacon that she completely disagrees with State Secretary Janos Lazar’s assertion that the Funds should be handled directly by the government. She says that the Okotárs Foundation and its partners , the Autonomia Foundation, the Foundation for Development of Democratic Rights (DemNet) and the Carpathian Foundation-Hungary, have spent the past decade saying that Hungary’s civil sector needs local and independent funding, but the economic and political environment are such that Hungary’s civil sector is still too weak and underdeveloped. Mora believes that Hungary’s civil sector would be strengthened if civil sector funds were distributed by an independent fund distributing mechanism.  She maintains that such a mechanism would know how to best target the funds, and know the needs of civil society well enough to respond accordingly.

Mora also feels that when it comes to distributing funds to NGOs, an independent fund distribution mechanism responds much more effectively than an oversized state agency packed with bureaucrats — and that’s assuming a best case scenario in which the state agency acts independently and non-politically. In Hungary, she says, it would be difficult to imagine such an optimistic scenario.  The vast majority of Hungary’s civil sector professionals and experts share her position, she says.

“People might wrongly interpret the actions of our organization as ‘politicizing’ because we deal with issues that are often the subject of political debate,” she adds. “This entire discussion is really about the place between politics and policy”.

The bulk of the money is given by Norway.  Bilateral memorandums of understanding outlining priorities and areas of support were signed between these donors and Hungary in the autumn of 2011. According to Mora there are twelve areas of support of which the NGO fund is but one.

She adds that the NGO fund is being provided to 14 other EU member states. They pursue identical or very similar goals and priorities which have been set by the donors.  In this case the donor is the Norwegian Civil Fund.

“A bilateral memorandum of understanding was signed between the donors and the Hungarian government. By signing this document, the government agreed to allow the distribution of this NGO fund, and they also agreed that they would not manage this fund and that instead it would be contracted out to an independent fund operator. As the fund operator for this Norwegian NGO fund, we were selected through an open two-step tendering process in 2012 and the Hungarian government has a consultative right throughout the tender. Furthermore, according to our contract we are obliged to invite representatives of the Hungarian government to the selection committee meetings–the committee responsible for making decisions regarding the grant applications submitted by the NGOs to the NGO fund. So the government does have first hand information, but they do not have the exclusive decision-making power and that’s probably what this is all about.”

We asked Mora to tell us whether Ökotárs’ activities can be compared to the financial support provided by the Hungarian government to actual political organizations in Romania.

“I don’t know how much say the Romanian government had in the process, whether they were even involved in the process, or whether they even agreed in theory to allow the Hungarian government to provide direct support to political organizations in Transylvania. But you should also remember that the United States government provided financial support to NGOs all over Eastern Europe back in the 1990s. And that support did NOT go through the government of the host country. Again, this is all about Fidesz wanting exclusive authority to decide who gets how much.”

Transindex, a Hungarian language news portal in Translyvania, and Atlatszo.hu recently won a lawsuit against the Ministry of Justice and Public Administration. The lawsuit began when the Ministry of Justice and Public Administration refused to comply with a Freedom of Information request submitted by Atlatszo.hu and Transindex which sought to uncover the use of Hungarian public funds by Transylvania’s Hungarian National Council for so-called “Center for Democracy” facilities operating in 26 Romanian settlements.

Atlatszo.hu submitted the public information request as part of a larger project in which the investigative journalists at Atlatszo.hu sought to uncover how much of Hungary’s public funds were being distributed to various political and civil organizations with ties to Transylvanian Hungarian National Council President Laszlo Tokes. Earlier in the project investigative journalists determined that a number of Hungary’s state-owned enterprises, including Szerencsejatek Zrt (the state-owned gambling enterprise), Magyar Fejlesztesi Bank Zrt (National Development Bank), Magyar Villamos Muvek (the state-owned electrical company), the Bethlen Gabor Foundation (a state-owned foundation), and the Ministry of Foreign Affairs provided no less than HUF 300 million (EUR 1 million) to newly-incorporated civil organizations in Romania run by, or with close ties to, political figures involved with the Transylvanian Hungarian National Council.

Atlatszo.hu Editor-in-Chief Tamas Bodoky tells the Budapest Beacon that the Ministry of Public Administration and Justice has still not complied with the Freedom of Information request.

In 2010, the newly elected Fidesz-KDNP supermajority in Hungary’s parliament ratified legislation which created an expedited citizenship process for Hungarians living outside Hungary’s borders. People of Hungarian heritage living outside Hungary’s borders could obtain Hungarian citizenship via an expedited process, thereby entitling them to vote in Hungarian national parliamentary elections (regardless of whether that person had actually ever stepped foot in Hungary).

The legislation was significant for a variety of reasons. First, Hungarian nationals living outside of Hungary’s modern borders in the Carpathian Basin number in the millions. There are large Hungarian communities living in Slovakia, the Ukraine, Romania, Austria, Serbia, and Croatia. The nationalist rhetoric of the Hungarian government has done much to sour relations with neighboring countries.

As Atlatszo.hu discovered, financial support (in the millions of Euros) had been funneled from the Hungarian government to newly incorporated NGOs run by, or with close ties to, Hungarian political figures in these former Hungarian regions. These political leaders represent Hungarian communities in the national assemblies of their respective countries, and are also in charge of the NGOs responsible for carrying out the expedited citizenship on behalf of the Hungarian government. It is perhaps of no coincidence that 95 percent of the votes cast by Hungarians living outside Hungary in Sunday’s general election were for Fidesz.

Hungary’s ruling Fidesz party has been widely criticized at home and from abroad for misusing the government and the civil sector to advance its own political agenda. The Budapest Beacon has covered such criticisms closely.