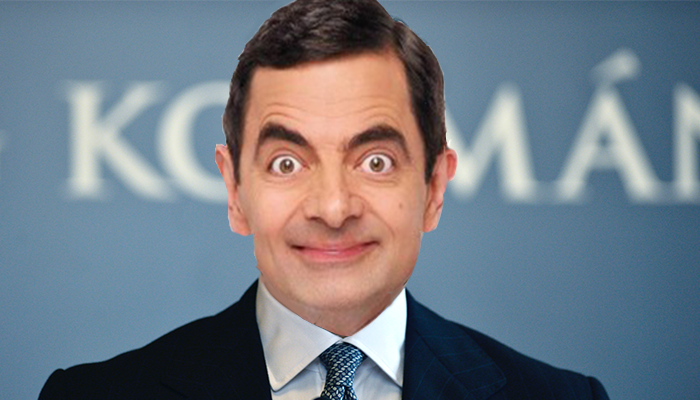 At his weekly two-and-a-half-hour press conference, Minister Overseeing the Prime Minister’s Office János Lázár talked about the government’s decision to build a 175-kiloetre fence along Hungary’s border with Serbia, the influx of refugees into Hungary, an agreement worth hundreds of billions of forints between the city of Budapest and the national government, Andy Vajna’s national security screening (that apparently never happened), the Paks nuclear reactor, his own infamous “Szekszárd speech”, and on what he may or may not have spent taxpayer money during his expensive trips around Europe in 2013.

Over the course of the brutally long press conference, Lázár explained that, in the government’s opinion, refugees and  “economic migrants” that illegally enter Hungary are one and the same thing.

Lázár said “The government is not happy about making the decision to build a fence between Hungary and Serbia” but must handle the illegal border crossing “crisis”  on its own because “it is clear that the European Commission has not helped, is not helping and will not help the Hungarian government [manage the influx of migrants into Hungary]”.

Hungarian and Serbian officials will hold talks in Budapest on July 1 and the issue of the fence will definitely be on the agenda, Lázár said.

(What sort of government announces plans to seal the border with a neighboring country just two weeks BEFORE a previously planned summit between the two countries takes place?!-ed.)

Lázár stressed that Hungary abides by all international agreements concerning the treatment of refugees.

“International agreements are very clear in defining who is considered a refugee. A refugee is someone who is persecuted based on race, religion, nationality, social class or political convictions,” Lázár said.

“[The Hungarian government] knows the difference between someone coming from a conflict zone and someone trying to enter Hungary as an illegal immigrant,” he stressed.

“Keeping in mind that the Hungarian government considers Serbia and Greece to be safe countries, those who try to enter Hungary [from Serbia] must go back to Serbia and Greece where they came from. Based on our information regarding illegal border crossers, the vast majority of them are coming [to Hungary] from Serbia after arriving in Greece. Therefore, once the border fence is erected, those who make it to our fence will be turned away because, according to the Hungarian government’s position, Serbia and Greece are safe countries,” Lázár said.

When asked whether the Hungarian government would consider scrapping plans to build the border fence if the Serbian government built one along its own southern border, Lázár evaded the question by saying that Hungary would be interested in exploring a common border security strategy with Germany, Serbia, Austria and Croatia.

He could not comment on a question asked by a Magyar Nemzet reporter whether it is true that the European Commission will appropriate Hungary a sum of EUR 40 million to be used for border protection.

Hungarian Helsinki Committee co-chair Márta Pardavi tells the Budapest Beacon that the Hungarian government’s position regarding sending refugees back to Serbia and Greece is completely wrong.

According to Pardavi, Serbia and Greece are not safe countries. A 2012 report by the United Nations Refugee Agency explicitly stated that Serbia is not a safe third country for asylum seekers because it simply lacks the requisite infrastructure necessary to temporarily house and care for refugees while their applications for asylum are being processed.

Furthermore, EU countries haven’t been sending asylum seekers back to Greece since 2011 when the European Court of Humans Rights lacks the wherewithal to provide adequate assistance to asylum seekers.

National government to give lots of money to Budapest

Meetings between the Budapest officials and the Ministry of National Economics are almost finished, Lázár said. The national government has agreed to provide more than HUF 200 billion (USD 730 million) in financial assistance to the city of Budapest from 2015 to 2018.

Lázár also stated that the city of Budapest would transfer ownership of the Dagály public bath and surrounding real estate, situated in Budapest’s District 13, to the national government for use in the 17th FINA World Championships and FINA World Masters Championships in July 2017, but offered no explanation as to why this was necessary.

Lázár discussed a report by the State Audit Office which assessed the efficiency of the Hungarian government’s state-owned enterprises.

Lázár said he takes the State Audit Office report very seriously because the state has now become the largest single provider of public utilities in Hungary.

Regarding Paks, Lázár said the government plans to move the Paks reactor out of the control of MVM Zrt. (the state-owned energy giant), but he didn’t elaborate what entity it would be transferred to.

The Hungarian government’s Film Commissioner Andy Vajna was never subject to a national security screening in accordance with Hungarian law.

Government officials and commissioners are required by law to undergo a security screening at the time of their appointment. In 2014 a Luxembourg-registered company owned by Vajna was given the exclusive right to operate casinos in Budapest.  One such casino reported a profit last year of HUF 3 billion (USD 11 million).

Lázár could not say whether other government officials had skipped the screening process but said he would look into he matter.

Lázár was asked whether he regrets comments he made at a forum in Szekszárd critical of Hungary’s overly bureaucratic and inefficient public administration system.  Released to the public by Együtt politician Balázs Berkecz, the speech became a news sensation.

Lázár responded by thanking Berkecz for calling attention to serious problems in the way Hungary’s public administration operates. He said the OSCE has also pointed out that Hungary suffers from a bureaucracy that is both large and inefficient.

Lázár said Hungarians are not satisfied with public administration. He wants more professionalism and less bureaucracy, especially in the fields of construction and tax collection where he said the country could really use more experts.

“It’s wrong that of 4.2 million workers in Hungary, 1 million are directly employed by the state,” Lázár said.

Lázár said it isn’t money that is important to the government but rather the fact that multinational tobacco companies have been “taking advantage” of 5,000 national tobacco store franchisees (an alleged practice the government hopes to correct by creating a “middle man” to buy from wholesalers and resell to retailers).

Experts believe the decision will increase the cost to retailers of tobacco products by an estimated HUF 10-12 billion (USD 36-44 million).  (Even HUF 600 million seems like a small amount to pay for what is essentially a government-mandated right to steal-ed.).

State secretary for communication András Giró-Szász added that the new tobacco product supply system will create 400 jobs.  He did not volunteer how many people working for tobacco wholesalers would lose their jobs.

András Pethő of Hungarian investigative journalism site Direkt36 asked Lázár to elaborate on expenses incurred during trips to Switzerland and Italy.  A recent court decision obliges the government to disclose who travelled, where they stayed, with whom they met, and what the purpose of the meeting was.

Lázár avoided going into specifics and claimed that he does not want to divulge any details regarding who he met with because those details are a matter of national security.

An article that appeared on Direkt36 following yesterday’s press conference can be read here.