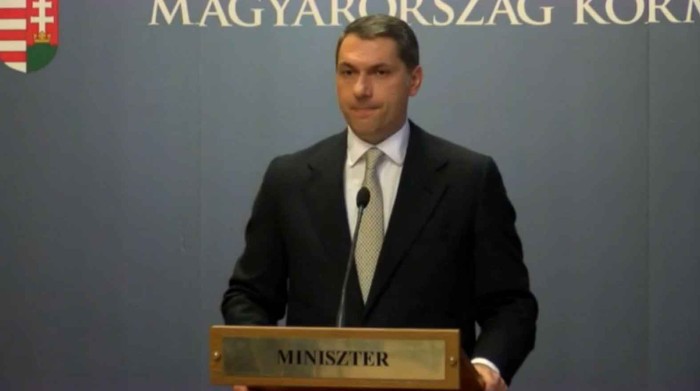 Minister Overseeing the Office of the Prime Minister János Lázár held his 31st marathon press conference today accompanied by government international spokesman Zoltán Kovács. Discussion points included the Paris terror attacks and Hungary’s heightened state of alert, asylum seekers, news that the European Commission has initiated an infringement proceeding against the Hungarian government, the situation regarding the sale of state-owned agricultural land, and plans to build a new national library.

Hungary is under attack

Hungary has a heightened state of security as a result of the Paris attacks, said Lázár. The minister reaffirmed news of the government’s new counter-terrorism committee which will operate under Hungary’s Counter-Terrorism Center (TEK).

“An attack against France is an attack on Hungary,” said Lázár.

He went on to say that the European Union is “rich, weak, unprotected and unable to protect its citizens”. However, he reassured those attending the press conference that “Hungary is the safest country in the European Union”.

Lázár said the state’s security services are finding more and more evidence that prove there is a correlation between immigration and increased risks of terrorism.

Both Lázár and Kovács were eager to dismiss the notion that Hungarian immigration authorities share any blame for failing to identify or register one of the terrorists who took part in the Paris terror attacks after allegedly passing through Hungary sometime in October.

News reports surfaced following the terror attacks that one of the assailants entered the European Union through the West Balkan corridor (Greece, Serbia, Croatia and Hungary) before making his way to France.

The terrorist may have entered Hungary without being registered at the border. In the immediate wake of violent clashes between Hungarian officials and asylum seekers in September at Röszke, tens of thousands of migrants were allowed to pass from Croatia to Austria via Hungary without any registration.

Lázár commented on the European Commission’s decision to open an infringement proceeding into the Hungarian government’s plans to have Russia’s Rosatom construct the expansion of the Paks 2 nuclear reactor.

According to Lázár, Hungary has the right to engage in trade agreements with countries outside the European Union (e.g. Russia) without having to seek the approval of the EU.

The minister blamed the Commission’s infringement proceeding on European companies eager to get a piece of the action in the controversial EUR 12 billion project.

When Hungary joined the European Union, it agreed that the European Commission would have the final say in matters related to the use of nuclear energy. As things stand right now, the Commission has not approved plans for the Paks 2 expansion in its current form, but this hasn’t stopped the Hungarian government from spending money on the project.

In 2015, the  government’s budget appropriated HUF 28 billion for the expansion, and next year’s budget has HUF 113 billion appropriated.

A reporter from Hungarian newspaper Népszabadság asked Lázár how the government plans to account for the funds spent on the expansion in the event the European Commission decides to shut down the Paks 2 plan in its current form.

Lázár did not answer the question, but he did say “you can be sure that everything is moving forward. The [Paks 2 expansion] is going to happen”.

In Lázár’s opinion, OLAF is investigating how tenders (funded by EU funds) were awarded in Hungary. This is also true. To read more about István Tiborcz and the OLAF investigation, read this fantastic piece by Hungarian investigative news site Direkt36.hu. The piece provides a very detailed look at how Tiborcz’s company came under the scrutiny of the European Anti-Fraud Office.

The minister talked of the controversial privatization of Hungary’s state-owned agricultural lands. He said more than one thousand hectares have been auctioned off, bringing a total of more than HUF 5 billion.

But not all the land will be sold off. The government plans on retaining ownership of some agricultural lands in use by state-owned enterprises, local farming cooperatives, horse breeders and big businesses. These lands, such as those currently used by the business interests of Sándor Csányi, will receive a special designation in which the businesses will retain their use of the land.

BKV to get HUF 24 billion

Lázár said the national government has agreed to provide Budapest Transportation Authority HUF 24 billion and will continue to engage in talks over its long-term financing options.

Budapest to separate from Pest county

The minister said the government has approved plans to separate Budapest from Pest county. He did not reveal how this would happen but said the local municipalities will have a say.