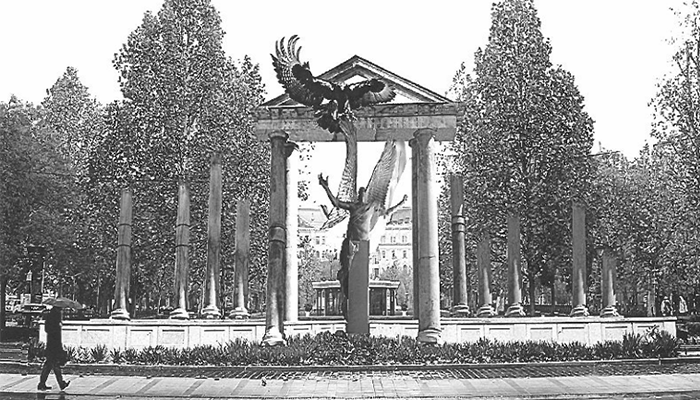 On 31 December Deputy Prime Minister Zsolt Semjen, acting on behalf of the Hungarian government, commissioned a memorial to the “victims of the 19 March 1944 German invasion of Hungary”.   The decision called for the HUF 220 million (USD 1 million) memorial to be completed and erected in Budapest’s Freedom square by 19 March 2014 marking the 70th anniversary of operation “Magarethe” in which several German troops enterred Hungary largely unopposed.  According to Hungary’s new constitution, that day marked the end of Hungary’s national sovereignty until free, multi-party elections were held in 1990.

In the interest of expediting the issuance of permits, the  memorial  was proclaimed a “project of national economic importance” even though presumably the only party for whom the memorial carries any economic significance is the Hungarian sculptor receiving the commission, Peter Parkanyi Raab.

The decision was taken without consulting other members of the government, parliament, or the general public, let alone Hungary’s Jewish or German community.  To the extent the government solicited proposals, they were not made public.  Nor did the government bother to obtain permission from the square’s owner, Budapest’s 5th District (although Deputy Prime Minister Semjen, chairman of the Christian Democratic People’s Party (KDNP),  had little reason to doubt the government would receive the full cooperation of 5th district mayor, Antal Rogan, who is also the head of the Fidesz delegation to parliament).

In an extraordinary city council meeting held this morning the 5th district assemblymen approved the erection of the memorial Mayor Rogan told them “memorialized the moment Hungary lost its sovereignty and every murdered, deported, humiliated person, including the many hundreds of thousands of Holocaust victims and tens of thousands of other victims as well.”

The city council’s decision was based on Rogan’s letter of 19 January explaining that the government had decided to erect a memorial “to all the victims of the German invasion” per the following description:

The memorial is to consist of two elements: the German imperial eagle and the figure of the Archangel Gabriel, and other elements, specifically 13 columns, and a tympanon set atop the gate, and text.  The memorial is to be built from bronze, stone, and chrome.  The total height of the composition is to be 7 meters.

Attached to the letter was a black and white rendering of the memorial (see above) and a site plan showing the precise location where it is to be erected.

As in the case of the House of Fates (Sorsok Haza) Holocaust museum planned for the derelict Jozsefvaros train station in Budapest’s 8th district (whence hundreds of thousands of Hungarian Jews were deported to Auschwitz in 1944), Hungary’s Jewish community was not consulted in the concept, design, or location of the Freedom square memorial.

Learning of the decision the first week of January, the Association of Hungarian Jewish Organizations (Mazsihisz) denounced the memorial’s implication that Germany’s invasion of Hungary was solely responsible for the deportation and murder of six hundred thousand Hungarian Jews.   As in the case of the House of Fates memorial, they would like to see greater attention given to the events leading up to the Holocaust, beginning with the 1920 Numerous Clauses laws (Europe’s first anti-Jewish laws).

They also insist that any Holocaust memorials acknowledge the responsibility of the Hungarian government for the destruction of two-thirds of Hungary’s pre-war Jewish population.

At a press conference held yesterday attended by Israel’s ambassador to Hungary, Mazsihisz president Andras Heisler announced that his and 15 other Jewish organizations were conditioning their cooperation with the Hungarian government on events commemorating the 70th anniversary of the Holocaust scheduled later this year on the Freedom square memorial not being erected.  They also insisted on the dismissal of Sandor Szakaly, the recently appointed head of the government-funded Veritas Historical Research Institute, for referring to the 1941 deportation of 18,000 Jewish “aliens” as a “police action against aliens“.  (Those deported were machine-gunned along with local Jews and buried in a mass grave at Kamianets-Podilskyi in what is generally considered to be the first mass murder of Jews to take place during the Holocaust). The third condition stipulated by Mazsihisz is that the “House of Fates” memorial examine the events leading up to the Holocaust and the Hungarian government’s complicity in those events.

This morning Budapest assemblyman Csaba Horvath (MSZP) told members of the press outside City Hall that the memorial planned for Freedom square was a “societal provocation on the part of the government” and a “falsification of history” that “offended the nation’s memory” by “grouping the victims together with the perpetrators”.

Horvath was joined by DK politician and former General Counsel to the United States, Szabolcs Kerek-Barczy, who denounced the memorial as “a symbolic gesture extended by Fidesz to the Hungarian radicals, extreme right, and neo-nazis”.  He added that after the election the memorial would be “deported” to the statue park.

I have received your letter of 14 January.

Considering that my government has taken to heart the much suffering Hungarian Jewish community, thank you with turning to me with your questions in an open and direct manner. Reading your letter reinforced my conviction that in the future we can work together to strengthen  the mutual respect and understanding among our country’s communities.  This applies to the memorial to the victims of the German invasion as well.

It is my conviction that the respect for the victims does not permit us to neglect the fate of those imprisoned, deported, and murdered.  You know better than me that the loss was terrible.  On this matter Hungary’s constitution declares clearly and firmly (that the German invasion of 19 March 1944 deprived Hungary of its sovereignty. -ed).  I can hardly believe that efforts made to erect a memorial to the victims requires any explanation.  This is a question of humanity and not politics or taking sides.

There are those who wish to undermine the memory of the victims and the memorial honoring them with current political speculation.  I can assure you that we will firmly reject these attempts.  I hope that the 70th anniversary of the invasion of our country will be a good opportunity for the well-intended members of your community to take a collective step towards a culture of respect while acknowledging its losses and sharing its pain.