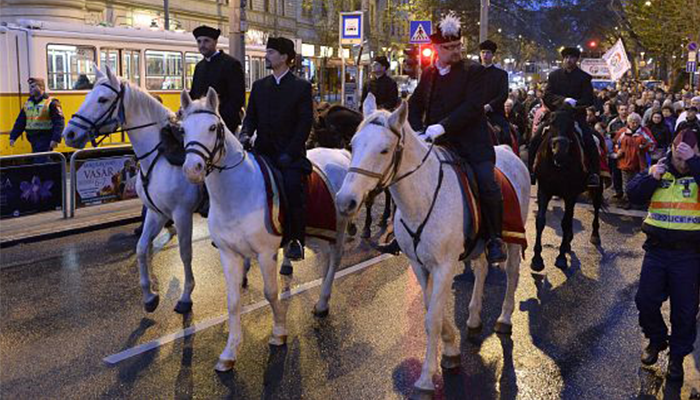 Hungary’s radical right-wing Jobbik party commemorated the 95th anniversary of Admiral Miklós Horthy’s “March on Budapest” on Sunday. Following 133 days of “red terror” under the Hungarian Soviet Republic under Béla Kun, and the invasion of Romanian, Serbian, French and Czechoslovakian interventionist armies, Horthy’s march into Budapest on a white horse marked the beginning of his nationalist regime. Jobbik members and ultra-nationalist youth leaders still hold Horthy as a “political example” in Hungarian history.  Each year at this time they evoke the admiral’s memory by marching through the streets of southern Buda in period clothing, with a rider leading the procession on a white horse.

Jobbik MP Előd Novák told the crowd that even though Horthy needed to deal with a far more severe economic crisis, the Great Depression between 1929 and 1933, he did “a far superior job than his present counterparts.” Novák said the Horthy era was a “flourishing age” for Hungary, even after the hardship caused by the 1920 treaty of Trianon and the Spanish flu epidemic.

Following the admiral’s route in the reverse direction, the crowd of 200 departed from Szent Gellért tér and ended its march on Kelenhegyi út, where speeches were delivered. Among those addressing the audience were Marcell Tokody, Jobbik Budapest city councillor, and Loránd Hegedüs Jr., a hardliner Calvinist preacher whose wife is a Jobbik member of parliament.

“We cannot be worthy of the admiral’s legacy until the red and rainbow-colored rags fall off from our capital, so it can once again become the Capital of Hungarians,” said Tokody, in a move to call for protesters to oppose leftist political movements and Budapest gay pride parades. Hegedüs added in his speech that “as long as they can publicly defame the memory of Admiral Horthy with impunity, you can do this with the entire Hungarian nation.”

Liberal Együtt and communist Munkáspárt 2006 parties condemned the Horthy march in separate statements. Együtt wrote that “Horthy was an accomplice in the biggest tragedy of twentieth-century Hungarian history, and is also indirectly responsible for the death of hundreds of thousands of Jewish and Roma Hungarians during the Hungarian Holocaust in 1944.”

Anti-Jewish sentiments were continuously present in the ideology of Horthy.  The Numerus Clausus law of 1920 restricted university enrollment for Jewish students. The Horthy regime was also responsible for the deportation of more than 400 thousand Hungarian Jews in 1944. Another 43,000 perished in Jewish forced-labour batallions attached to the Hungarian army. Under Horthy Hungarian armed forces committed anti-Serbian and anti-Jewish massacres in the occupied Yugoslavian city of Novi Sad during 1941.

Defenders of Horthy point out the relative political and economic consolidation of the 1920s brought about by the politics of moderate nationalist prime minister István Bethlen, directly to the governor. In the recent years, officials of the Fidesz government made many gestures towards the supporters of Horthy as a positive historical figure, tolerating more and more statues and busts of Hungary’s interwar head of state. Recently, Minister of Agriculture Sándor Fazekas went as far as to claim “there would be no Hungary today had it not been for Horthy.”