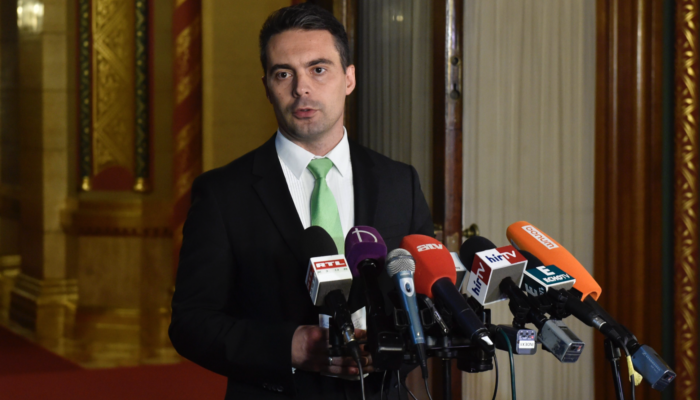 Jobbik chairman Gábor Vona (pictured) met with Prime Minister Viktor Orbán on Tuesday and outlined conditions to his party’s cooperation in Orbán’s plan to amend Hungary’s constitution, reports index.hu. Vona demanded that the Orbán government put an end to the so-called settlement bond scheme whereby foreigners can acquire the right to reside within Hungary and move freely about the EU. If it passes, the amendment would be the seventh to the constitution since the Fidesz-KDNP-dominated parliament adopted it in 2011 over the objection of the three opposition parties.

Orbán and the ruling Fidesz-KDNP political alliance need a two-thirds majority vote in parliament to pass the amendment prohibiting the settlement of third-country nationals (non-EU citizens) in Hungary without the explicit approval of the National Assembly. Although Fidesz and its Christian Democrat allies possess an absolutely majority in parliament, they are several MPs shy of the two-thirds majority required to modify the Fundamental Law.

A parliamentary “debate” was held on Monday concerning the proposed changes, but the Hungarian Socialist Party (MSZP) and Democratic Coalition (DK) did not participate, the latter having announced a boycott of parliamentary proceedings last week.  Opposition party Politics Can Be Different (LMP) criticized the government but indicated they would not vote, as did the Hungarian Liberal Party’s sole member of parliament. Although a staunch opponent of Fidesz, extreme-right Jobbik also opposes the settlement of refugees in Hungary, and was, in fact, the first to propose that Hungary modify its constitution accordingly. It could represent the votes Orbán needs to pass the amendment.

This puts a powerful card into Jobbik’s hand. Without its votes to amend the Fundamental Law, the massively expensive October 2 referendum would appear to be an even greater failure than it did when it fell some 800,000 votes shy of what was required to be legally valid. Orbán staked his political  prestige and that of Fidesz-KDNP on the referendum, spending at least HUF 14 billion and counting on an Orwellian media campaign and ignoring other pressing national issues while inciting anti-immigration hysteria. The failure of Fidesz to pass the amendments would be a massive political embarrassment.

According to Vona, he used his new power at the negotiating table on Tuesday, insisting that his party would only support the constitutional changes if Hungary’s controversial residency bond program were to be suspended.

“We want neither poor migrants nor rich migrants to be settled in Hungary, neither poor terrorists nor rich terrorists should come, neither Juncker nor Rogán should be able to settle immigrants in the country,” Vona said, referring to European Commission president Jean-Claude Juncker and Fidesz politician and architect of the residency bond program Antal Rogán.

“If they don’t shut down the residency bond program, then the constitutional modification is just a trick, a deception and a loophole for terrorism,” Vona said.

As of August, the program had settled some 2,727 foreigners through the sale of state-issued bonds brokered by a number of mostly off-shore companies linked to propaganda minister Rogán. Since bond buyers can also apply for residency permits for their immediate families, a total of 7,559 people gained residence in Hungary under the scheme, far more than the 1,294 asylum seekers that would have been temporarily settled in Hungary under the EU’s “resettlement quota.” (Read more of our coverage of the settlement bond program here.)

After the “Orbán-Vona summit,” Fidesz communication secretary Bence Tuzson told index.hu that the Prime Minister would “consider” Vona’s proposal, and  the party hoped negotiations would be complete by November 8, the scheduled date for the final vote.