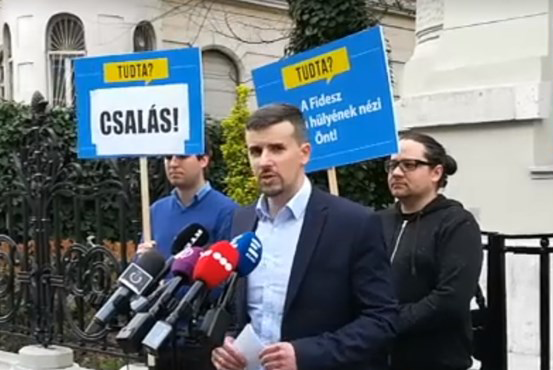 Based on a decision made by the party presidium, Jobbik is demanding a recount of Sunday’s general election votes, announced party spokesman Péter Jakab, at a press conference held in front of the party’s Lendvay street headquarters.

“Fidesz supposedly won a two-thirds parliamentary majority, and yet the great silence is conspicuous,” Jakab said. “There is no celebration. It is as though the boys are afraid they’ll be caught out in the end. And perhaps they are right to be afraid, since in the country today the general public opinion is that Fidesz stole this election.”

According to Jakab, it appears Fidesz also got some help in its victory from the National Election Office (NVI) under former Fidesz undersecretary Ilona Pálffy. He recalled that on Sunday NVI’s server crashed several times, “as though the election office was caught by surprise that there are parliamentary elections in Hungary every four years.”  Jakab also finds it interesting that no partial election results were announced for several hours after polls closed, even though 70-80 percent of the vote had been processed. “What happened in the hours preceding that, and in the final half hour of the election when according to the election office’s data base 170-180,000 votes disappeared?”