Jobbik supporters paraded through the streets of Budapest with torches in commemoration of the 1956 Uprising late Sunday afternoon. Speeches were delivered at Corvin Plaza, then wreaths were laid at the Pest Boys statue (a memorial to the young men who were involved in heavy fighting against the Soviets at Corvin Plaza). The group of 1,000-2,000 attendees marched along Sándor Bródy Street, where thespian Péter Vári-Kovács concluded the event with a performance.

The master of ceremonies was Sándor Pörzse, the editor in chief of Jobbik’s in-house newspaper, Barikád. Between introductions, Pörzse repeatedly returned to the issue of opposition politician Ferenc Gyurcsány. Pörzse expressed dismay over what he sees as justice not delivered for the violent protests in Budapest in 2006, when Gyurcsány was prime minister.

“If these guys ever return to power, a world of bandits will await us,” Pörzse said.

Current Prime Minister Viktor Orbán is also responsible for 2006, he said, because instead of standing up with the people, Orbán had fled the city in his armor-plated vehicle.

Levente Murányi, director of the Pesti Srácok institute, a 1956 remembrance organization, was the first to take the stage. In addition to addressing the Uprising itself, he too took jabs at Gyurcsány, likening him to Nero and applauding him for completely destroying Hungary’s left wing.

The fact that Gyurcsány still walks around a free man is proof that Fidesz is not a national party, Murányi said. He added that Jobbik is the party through which the legacy of the Uprising lives on.

The Gyurcsány theme was shared throughout the speeches — it was even the focal point of the speech delivered by László Toroczkai, the far-right mayor of Ásotthalom and deputy chairman of extremist party Jobbik.

According to Toroczkai, the Uprising of 1956 was embezzled by the transition of 1989. This was evidenced by the election of Gyula Horn in 1994.

“This is the root of all our problems,” he claimed.

Toroczkai detailed the negative features of the European Union and even migration, but he primarily stayed on the topic of 2006, when street riots broke out over Gyurcsány’s “lies” speech. The mayor was clearly proud of his role in the 2006 protests, when he led a group of hooligans in the takeover of the public television studios in downtown Budapest.

The Jobbik deputy chairman said he did not believe in the 2010 message of Fidesz that there would be a “ballot box revolution.”

“Just as back then, Jobbik is still persecuted by the [government], except that something has changed since then,” Toroczkai said.

Today, Jobbik was the strongest opposition party and that meant one thing: the momentum and desire for freedom embodied in the 1956 Uprising has now “stepped onto the political [stage],” Toroczkai said in reference to what he believes will be a change of government in 2018.

Jobbik events have become much less radical than earlier in the party’s history, and the Corvin Plaza ceremony was no exception. While there were anti-semitic statements made and people dressed in far-right militant attire with SS patches sewn onto clothing, the crowd was by and large much more easy-going than at earlier Jobbik events.

Actor László Baranyi took the stage after Toroczkai and performed a rendition of the account of a 1956 freedom fighter. Jobbik chairman Gábor Vona spoke after the performance. 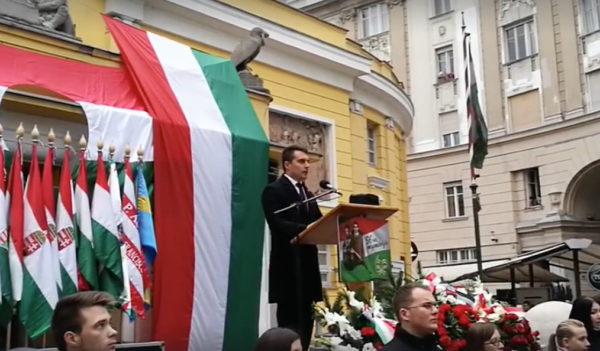 Vona was quick to say that Hungarians have not shown sufficient respect for the heroes of 1956. If Hungarians did have respect for them, he said, then the list of communist-era government agents would not be kept a secret.

Vona said he would end this shameful deceit by releasing this information when Jobbik is elected into government. He also spent time reflecting on the events of 2006.

No real transition ever took place, Vona said. “Hungary had switched from Kádárism to Orbánism, and the country has gone from being the happiest barrack in the block to becoming the saddest Member State.”

The Jobbik chairman discussed the conditions under which his party would consider supporting Orbán’s proposal to modify Hungary’s constitution for the seventh time. Jobbik will support the proposal if Orbán will end the government’s controversial residency bond program.

Vona read aloud a statement by Jobbik’s parliamentary group outlining the condition for support, thereby eliminating any chance that Orbán could try to coerce a Jobbik MP into voting with Fidesz on the issue.

If the prime minister is unable to accept this, and the failed October 2 referendum is followed by a failed constitutional modification, then the prime minister must “be brave and resign, then call for early elections”, Vona said.

According to Vona, if the heroes of 1956 were still alive today, they too would protest against the residency bond program, “which is a miserably corrupt issue, one that Orbán is simply unwilling to let go of.”

On the issue of holding politicians to account, he said that as long as this does not happen, Hungary will not be a respectable, free or democratic country. Once the politicians were held to account, the country could start addressing issues such as health-care and higher wages.

“We want to prove that, regardless of their political leanings, there is a sense of patriotism in the heart of all Hungarians, and that is why instead of building fences between Hungarians, we want to build bridges,” Vona said in closing.