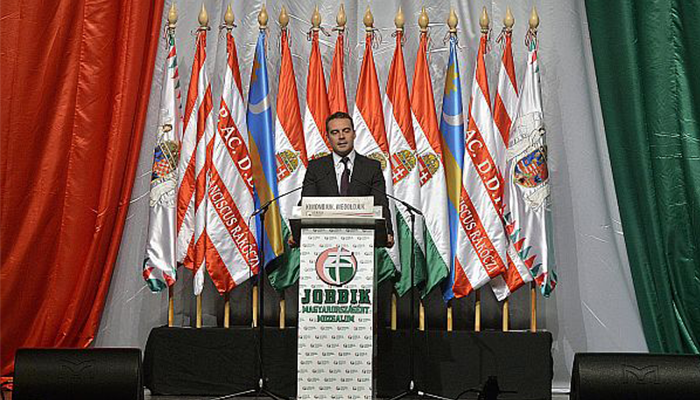 Reports surfaced earlier this week that Jobbik president Gábor Vona would exercise a power granted to his position as leader of the party at Jobbik’s upcoming party convention. The “power” granted to the president of the far-right party is a doozie — it allows the party’s president-elect to reject the nomination of candidates for the party’s vice presidencies. In short, Vona can prevent key members of the party from seeking important positions within the party.

As reported by atv.hu and Index.hu earlier this week, party infighting has prompted Vona to announce that he would veto the vice presidential nominations of key Jobbik figures, including Előd Novák, István Apáti and István Szávay.

The jury is out on what is really behind Vona’s motivation to prevent Jobbik’s openly hardline members from retaining their highly visible positions within the party, but there is no shortage of reasons which suggest that this, too, is a smoke and mirrors act.

A gondola ride across the political spectrum

Jobbik is a radical right-wing, ultranationalist party with ties (official and unofficial) to violent right-wing extremist groups. Early in the party’s history, the radical views (and actions) espoused by Jobbik helped it secure a small but solid base of extremist supporters.

The party enjoyed its first national success in 2009 when it came out of nowhere to get 3 MEPs elected to the European Parliament. The following year, Jobbik managed to get 16.7 percent of the national vote, enabling it to send 43 MPs to the Hungarian parliament.

Sometime in 2013 party founder and president Vona decided to moderate the party’s image through what was referred to in Hungary as the “cuteness campaign.” The campaign was a concerted effort by him to shift Jobbik’s image from a radical right-wing party to that of a more mainstream party. The campaign was not supported by everyone in the party, notably the extremist base, but proved nonetheless to be quite successful. Currently, Jobbik is Hungary’s most widely supported opposition party.

While the party toned down its extremist rhetoric on the national level, it remained true to its cause at grassroots levels — as evidenced by the party’s local leadership, membership and continued affiliation with violent extremist groups and controversial hate figures.

Despite Jobbik’s increase in popularity, key members of the party were not fond of its “people’s party” shift, which reportedly resulted in infighting.

As pointed out by sociologist and political scientist Anikó Felix, Jobbik’s in-house turmoil prompted division within and eventually led to a failed attempt to create another radical-right party known as the Golden Dawn Movement. The movement proved ineffective at garnering the support of Jobbik’s extremist base and Jobbik succeeded in presenting the outward appearance of a strong and stable party.

“The purpose of this communication was to [reassure Jobbik’s core base] that the party’s moderate outward appearance is nothing more than a mask and the party has not changed. It is only communicating differently on the surface to garner more support,” Felix writes.

Jobbik pulled off a relatively successful campaign during the 2014 national election and emerged as Hungary’s second-strongest unified political party.

Its more openly radical elements (which include Előd Novák, István Apáti and István Szávay) continue to publicly represent Jobbik’s extremist core. Their divergence from Vona’s “cuteness campaign” presents an obstacle for the party’s next transition from a mainstream party to a people’s party, but not in the way you would think.

Vona himself has been no stranger to controversy. His anti-Jewish, anti-Roma and xenophobic views, coupled with his willingness to found paramilitary organizations, cemented his place in the party.  However, over the past few years Vona has traded in his traditional Hungarian folk attire for a well-cut business suit. He wants to debate policy and steer clear of dialogue that could draw out his extremist views before the public. He desperately wants Jobbik to appear to be a people’s party.

Should Vona appear to emerge as the victor of a huge internal fight “the more likely he is to convince everyone that he has transformed Jobbik into a more moderate political force,” writes Péter Magyari of Hungarian news site 444.hu. “It is in Vona’s interest to have Jobbik’s radical supporters say, ‘This Jobbik isn’t the Jobbik that it used to be’. And it certainly sounds more credible than Vona himself saying ‘the party has changed’.”