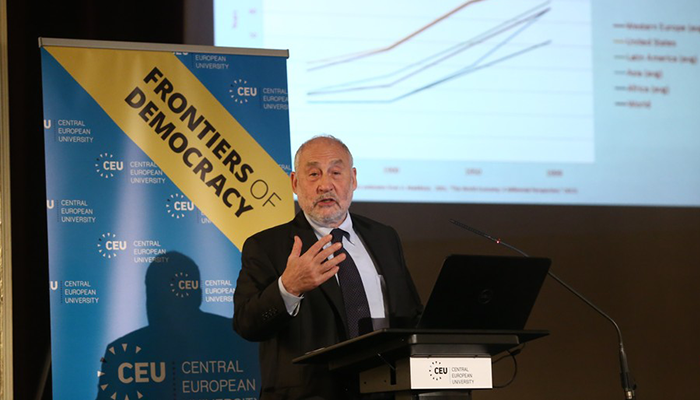 After explaining the impact of the industrial revolution on standards of living in the 19th and 20th centuries, the Columbia professor presented three factors key to the rapid rise in standards of living: accumulation of capital, improvements in the efficiency of allocation and the role of learning.  Stiglitz stressed the latter’s importance to economic development as well as to the structure of democracy. According to him self-defined “illiberal democracies” prove to be efficient in resource allocation but are prone to corruption and generally fail to increase living standards.

On the creation of a learning society

Raising living standards depends on every institution of a democracy, says Stiglitz.  In addition to economics, politics and mindset affect living standards.  Stiglitz argues that the creation of a learning society and the stability of democracy are interrelated.  He points out that science questions authority, requires an open society and could counter an increasing anti-scientific narrative.

On government regulation of markets

Doing away with democracy comes at a high price both in terms of the market and society, says Stiglitz. pointing out that in a deteriorating liberal democracy there are fewer and fewer controls on corruption.  “If a legal system fails to protect the weak,” he warns, “one can create a legal framework that will only serve the powerful, thereby creating more inequality”.

Stiglitz singled out Russia as a good example of this. According to him, Russia’s sources of income are “on the level of African countries” because it is heavily dependent on oil exports.  The fact that oil prices have risen is not the product of good economic policy, says Stiglitz, who points out that Russian living standards have not increased and that Russian life expectancy has radically decreased.

He argues that GDP is only one measure of performance and that political exclusion can still signify failure.

According to the economist, politically non-inclusive growth is not real growth, and the main model of innovation should include a sustainable quality of life, as well as protecting the environment. “The problem with Western liberal democracy is not that they have created too much freedom but that they did not create adequate forums for participatory democracy.”

Stiglitz points out that crisis situations can be avoided through systematic government intervention in the market. Innovative tech markets, for example, need regulation in order to develop in a meaningful way.  He says innovation also requires investments but that capital markets are often ineffective in this.  Furthermore, limited competition brings obstacles to development.

Stiglitz criticizes entrusting research and science to the private sector, which he says is too focused on generating profits.  He believes “the reason the hand is invisible in the market is because it’s not there”. For this reason governments have to regulate markets but this can only happen within the framework of liberal democracy.

What is to be done to promote learning?

Stiglitz argues that the proliferation of patents is a problem in the United States. He adds that at least in the EU you have a common framework of patents, which is much more beneficial than in the US.

In conclusion the two-time Nobel Prize-winning economist emphasized that education is central in the process. He argues that the focus should be on life-long learning, that is, “learning to learn”.  Stiglitz says there are two different stages: learning in schools and on-the-job training. The relationship between the two is changing with technology. He adds that the presumption you will not gain knowledge after leaving school is not true any more, because the internet bombards us with information constantly. But learning how to interpret information becomes crucial on the school and on the job. “A learning society needs direct government interventions in how the market allocates resources.”

In response to a question from left-wing news daily Népszabadság whether his lecture carried a subliminal warning to Hungarian Prime Minister Viktor Orbán, Stiglitz answered that he was speaking in a much broader historical sense, but later acknowledged that restrictive education policies, government intervention without checks and balances, and illiberal democracy could clearly be abused.

Commenting on the Trans Atlantic Trade and Investment Partnership (TTIP) agreement the Columbia economist criticised the US diplomatic approach during the talks. He thinks that the fact the US demands legal assurances for its corporations signifies a mistrust on behalf of Americans in the existence of the rule of law in Europe, which Stiglitz describes as an unfounded concern. “There is no rationale in asking for extra protections,” he concluded.

According to Stiglitz, TTIP and the Trans Pacific Partnership (TPP) agreements between US and Europe and the Pacific respectively is “making things worse, universities less open and more profit-oriented”.

Bio: Joseph Stiglitz received a doctoral degree from Massachusetts Institute of Technology in 1967. Has been a professor of economics at Princeton, Stanford and MIT as well as All Souls College, Oxford University. He was a member of President Bill Clinton’s economic planning team during  the 1990s, and was awarded a Nobel Prize in Economics in 2001 for his methodology of asymmetric information-based analysis of markets. He shared a Nobel Peace Prize in 2007 for his contribution to the 1995 report on the Intergovernmental Climate Change Panel. Besides two Nobel Prizes, Stiglitz holds the French Legion of Honor.  At present he is a professor of economics at Columbia University.