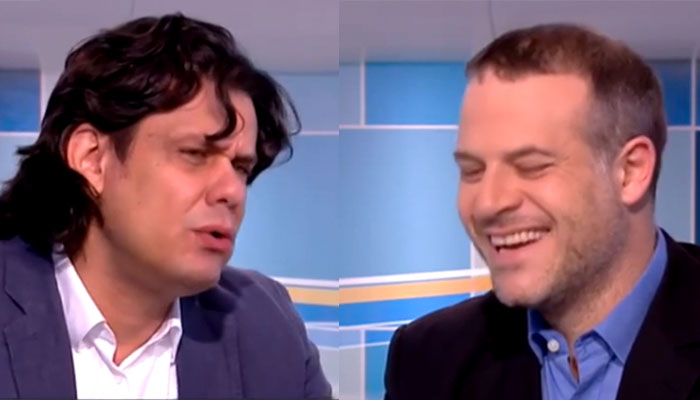 Fidesz MEP Tamás Deutsch (left) and Together 2014 co-chair Péter Juhász (right) look set to hash it out in court.

In an interview on Hungarian television last week Deutsch said he doesn’t understand what all the fuss is about with respect to the proposed law regarding mandatory drug tests for minors aged 12 to 18, journalists and politicians. He said the law “would help various communities by making sure that less people in Hungary are slaves to drugs”. Therefore, Deutsch reasoned, the law “serves a noble goal”.

“Drug tests,” he said, “are required by employers around the world and are now an accepted practice when it comes to hiring new employees. It’s even customary in the acropolis of liberal democracies, the United States.”

Deutsch said he’s always abided by the laws governing Hungarian citizens. “If there is a decision made in Hungary making it mandatory or voluntary for public personalities to take drug tests, I will be available for the task,” he said.

“I have never tried any drugs. If it’s been like this for the past 48 years, it’ll stay like this in the coming decades. I’ve consumed alcohol, I’ve been drunk, I’ve even smoked tobacco. I can even tell you why I never tried drugs. I was about 9 years old when I saw a West German film that was about a rebellious girl who got high on some kind of drug. The film showed the girl feeling dizzy, squeamish and even vomiting. Vomiting frightens me. This (image) fixed itself in me when I was 9 years old. Some people are afraid of spiders.  Some people are afraid of anacondas. I am afraid of vomiting.”

“Tamás, I know that you’ve consumed various drugs. I know this because we have a lot of mutual friends with whom you have done drugs. You had the opportunity to keep your mouth shut in this matter.  And I would’ve respected your decision to stay out of it because it’s an issue that concerns your private life. Even now I’m not condemning you for speaking up about this, but for not being honest about it.  To quote your boss: you’re not a man, you’re not standing up to the task, you’re lying like a kindergarten child who thinks that a fib can alter reality.

“Therefore, I declare that you have done drugs. This is a hard statement and you can even ask me to explain myself in court. This, of course, is what [Prime Minister Viktor] Orbán expects of you, and even I expect this of you because I can prove this in court.

“Many of our mutual friends have indicated that they do not wish to get involved in our political skirmish.  But if this case ends up in court they will be obliged to attest to the truth as witnesses.”

Deutsch takes the rest of the day to think about it, then responds again! (14 Dec.)

“Terrorists live off of drugs, they are fanatical liars. They are blind, violent, savage and villainous people. They attack our freedom and seek to destroy our everyday security. This is why we – the respected, honorable, freedom-loving, well-intentioned people – have to fight against them with everything we have. Peter Juhasz is a virtigli [sic] public personality terrorist. He’s outrageous, low-down, lying and moral insanity [sic]. Many people think that Peter Juhasz is a hapless poop dumpling, and that he’s not worth the attention. They may be right.

“I think I’ve had it with the lies that he, and those who share his principles, have for years… humiliated those who belong to the civilian party with their most mentally ill lies. (It’s valid to question why it is that those who belong to the juhaszpoopdumpling public life have finally had it with me. But this is something for another time.) Juhazpeter [sic] conjured an enormous lie about it. He is well-aware of this. He bumbles about spinelessness when he is the one who is doing the defaming. This is exactly how the communists did it. They lied morning, day and night. They continued to lie and then they paid the price. Because we, freedom-loving people, engaged in battle with them and defeated them. Juhaszpeter [sic] will also endure the same because I won’t let this go. I will go to battle with him and defeat this druggy political terrorist.”

So what happens now?

Juhasz and Deutsch appeared back-to-back this morning on ATV’s Start hosted by Egon Ronai. The two were asked whether they would be willing to appear at the same time. Deutsch apparently declined and said they would meet again in court.

The interview with Juhász largely revolved around two issues: the real estate scandals in Budapest’s V. District which he has been investigating as a newly elected member of the V. District city council, and the conflict with Deutsch regarding the latter’s alleged drug use.

Deutsch’s interview was all about the conflict with Juhász. Neither of the interviews yielded any new information, however Deutsch did reaffirm his intention to sue Juhász for defamation.