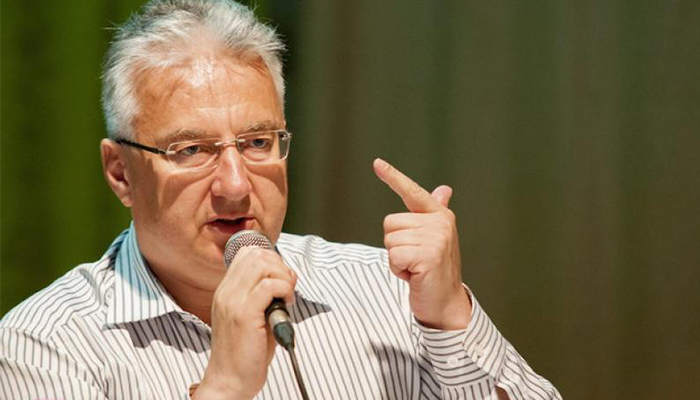 The Hungarian government has been quietly drafting a replacement for its much-criticized 2011 Church Law. Zsolt Semjén, chairman of the Christian Democratic People’s Party (KDNP), calls plans to modify the controversial Church Law “unacceptable” and says his party will use every means at its disposal to prevent this.

The Church Law is one of numerous so-called “cardinal laws” passed by the Fidesz-KDNP government since 2010 requiring a two-thirds parliamentary majority to modify or annul.   Without the support of KDNP, Fidesz’s Viktor Orbán does not command a parliamentary supermajority, only a majority.

At a conference of Hungarian Catholic Bishops last week, Cardinal Peter Erdő, Archbishop of Esztergom-Budapest and Primate of Hungary, said “we were shocked to learn that [the government] again wants a new law on churches and religions, despite them passing a new one two years ago.”

Erdő called on the government not to undertake the drafting of a new church law which would “upset the practice of religious freedom and institutional operation”.  He believes it a mistake to rewrite the rules of governing the relationship between church and state without first consulting the affected parties.

But if any church in Hungary enjoys a preferred status, it is the Catholic Church.

What’s this all about?

In 2011 Hungary’s Fidesz-KDNP-controlled parliament passed a law regulating the operation and funding of churches in Hungary which sought to deny “business churches” access to state funding by stripping them of their official church status.

The 2011 Church Law only recognized 14 churches in Hungary.  After the law came into force, all other churches were deregistered, meaning they no longer qualified to receive public funding in the form of the 1 percent of personal income tax Hungarian taxpayers may elect to donate to a recognized religious organization when filing their annual returns.  Revoking their “1 percent” status deprived scores of religious organizations of an important source of revenue.

Furthermore, deregistered churches no longer qualified for government payment for services undertaken on its behalf, including operating schools for disenfranchised communities and running homeless shelters, retirement homes and refugee shelters.

Deregistered churches wishing to obtain official recognization could reapply.  First, the church must prove its members exceed a certain number by collecting signatures  Then, a government-appointed committee of “religious scholars” must establish the church has “theological legitimacy”.  Next, the Parliamentary Committee on National Security must verify that the church does not pose a threat to national security.  Following this, the Parliamentary Committee on Justice must verify that the church is providing services of legitimate public benefit to Hungarian society.  Finally, Parliament must approve the church with a two-thirds vote.

The European Court of Human Rights

In early April 2014 the European Court of Human Rights in Strasbourg  ruled that Hungary’s Church Law violates Article 11 of the European Convention on Human Rights. The lawsuit was brought by a number of the deregistered churches.

A statement released by the European Court of Human Rights summarized its decision as follows:

The Court found in particular that the Hungarian Government had not shown that there were not any other, less drastic solutions to problems relating to abuse of State subsidies by certain churches than to de-register the applicant communities. Furthermore, it was inconsistent with the State’s duty of neutrality in religious matters that religious groups had to apply to Parliament to obtain re-registration as churches and that they were treated differently from incorporated churches with regard to material benefits without any objective grounds.

After the government of Hungary unsuccessfully appealed the decision, the ruling came into force in September 2014.  The ruling obliges the government to provide restitution to the churches that were discriminated against, and to modify the law so that it complies with Article 11 of the European Convention on Human Rights.

Between a rock and a hard place

Dr. David Baer tells the Budapest Beacon that the Hungarian government may be in a pickle because the Strasbourg court decision explicitly states that the Hungarian state may not distinguish between churches with respect to the “1 percent” allocations.

“[The Hungarian government] will probably need to modify the law to allow every religious community the same opportunity to garner the 1 percent,” says Baer.

Apostoli Nuncius Alberto Bottari de Castello, the Holy See’s ambassador to Hungary, tells the Budapest Beacon that the embassy has received no official information regarding the new church law.  Nor has the government informed the Holy See of its intention to modify the law.